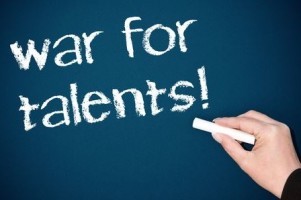 October 8, 2015 – Eighty-six percent of U.K. recruiters expect the job market to stay as competitive, or become even more challenging, in the next 12 months, according to recent research released by Jobvite’s first ‘U.K. Social Recruitment Survey.’ The reason: 58 percent of hiring professionals say the lack of skilled or qualified workers is their biggest challenge when it comes to hiring quality talent.

U.K. companies and their executive teams have come to expect high levels of performance from their in-house recruiters: 68 percent said they can onboard a candidate in 11 to 60 days, though 49 percent are experiencing increased pressure to hire faster. Leading the charge to quicken the pace: senior management (67 percent), business line managers (39 percent) and corporate boards (20 percent).

Despite increased pressure to hire better and faster, investment in technologies that can expedite recruiting and ensure that better talent is found and hired faster is very low:

“Increased competition and a widening skills gap are driving recruiters to find new ways of engaging with talent,” said Dan Finnigan, CEO at Jobvite. “It’s clear that the U.K. recruiting industry is moving toward a more dynamic and exciting way to attract, identify, and onboard talent. Many organizations are starting to realize the importance of investing in their own employer brand instead of relying so heavily on outside recruiting agencies, as was standard in the past.”

The latest official figures by the U.K. Office of National Statistics show faltering employment growth, with unemployment rising. “This may reflect the fact that recruiters are actually facing greater hiring difficulties because of a countrywide skills shortage,” said Scott A. Scanlon, founding chairman and CEO of Greenwich, Conn-based Hunt Scanlon Media.

“A shrinking skills pool means that corporate in-house recruiters will need to find new ways of casting their nets wider to find the best and brightest candidates. We are seeing this in the U.K. and across the U.S.,” he said. “Talent shortfalls are a rising global problem that we believe is now rapidly developing into a competitive threat for companies.”

Mr. Scanlon said that U.S. employers are particularly under pressure to address talent shortages, as one in three employers now experience difficulties filling positions. “Talent shortages are real and not going away,” said Mr. Scanlon, “and in the U.K. we are seeing the slow adoption rates of social media technology as compounding the problem for hiring managers and those tasked with talent acquisition.”

Ninety-two percent of corporate recruiters in the U.S. are using social media to enhance their candidate identification capabilities, said respondents to Jobvite’s survey questionnaire. “That near-religious use of technology is keeping American recruiters and their In-house counterparts way out front in the hunt for global talent,” said Mr. Scanlon. “In the current global war for talent the Americans win, hands down.”

By contrast, only 40 percent of U.K. corporate recruiters say they are using social media effectively in candidate sourcing.

The good news: one-third (33 percent) of all U.K. corporate recruiters are planning to increase investment in social recruiting in the next 12 months and over a quarter (27 percent) of recruiters have found social or professional networks to be the most effective means through which to grow their employer brands. Forty-six percent of those not using social media today are considering, or have already started, planning their strategy for the next 12 months.

Of the 40 percent of recruiters in the U.K. using social media for candidate identification today, 75 percent turn to Facebook, 57 percent to Twitter, and 38 percent to LinkedIn.

An exhaustive in-house recruiting report being released by Hunt Scanlon next week tracking talent acquisition professionals and their recruiting habits across the U.S. reveals just the opposite: 95 percent of respondents ‘regularly use’ LinkedIn as a primary candidate sourcing technology, while Facebook and Twitter were clearly seen as secondary platforms.

“Social media sites, particularly LinkedIn, was seen among our survey population as a ‘transformative’ tool that is ‘revolutionizing’ the way in-house talent professionals seek, identify and attract professional level workers to their organizations,” said Mr. Scanlon.

Twitter, according to the Hunt Scanlon report, was seen as a ‘quick, thought leadership sharing platform’ used to communicate with candidates. Facebook, rated third, was seen as a ‘resource to reach younger people in the workforce, and those in the beginning stages of building their careers.'”

The Jobvite survey, conducted by independent research firm RedShift Research, has been undertaken and published in the U.S. for the past eight years as the Social Recruiting Survey. This year it garnered the opinions of 500 U.K.-based recruiters and HR professionals across several industries and examined employers’ strategies with regard to winning the war for talent and explored the U.K. recruitment market’s relationship with social recruiting.

The findings mirror research conducted by management consulting firm InterExec, which polled over 7,000 senior executive recruiters. Their report found that 40 percent of recruiter respondents now believe that it is ‘crucially important’ for senior executives to have his or her own business related social media presence.

“There are no major surprises about the growth of social media,” said Kit Scott-Brown, managing director InterExec. “We all know it and feel it.  But it is clear how important recruiters now believe it is for senior executives to manage and maintain their own business social media activity.“

Reputation, he said, both in terms of corporate and personal credibility, is clearly aligned to a social media profile.

“And that profile at some point soon will be uploaded to candidate databases used by recruiters and hiring managers who are now gearing up for lots of action through the end of the year and into 2016,” said Mr. Scanlon.

Businesses in the U.K. are reporting improving confidence levels in their hiring plans, whether they can find the talent or not.

Seventy-four percent of employers intend to take on permanent staff in the U.K. during the next few months, according to the latest JobsOutlook survey by the Recruitment and Employment Confederation (REC).

The survey, which polled 600 U.K.-based employers, found that eight out of 10 (80 percent) respondents said that economic conditions in the country as a whole are getting better. And almost half (46 percent) expect hiring and investment to improve. U.K. employers expect to see shortages in candidates for professional and managerial roles (14 percent), construction roles (11 percent) and technical and engineering roles (11 percent) in the next year.

Still, there’s no getting around the fact that U.K. businesses throughout the country remain challenged to fill managerial positions. There was a significant drop in applications for management jobs in June, and the statistic lead market watchers to conclude that candidates were perhaps becoming increasingly selective in their job search.