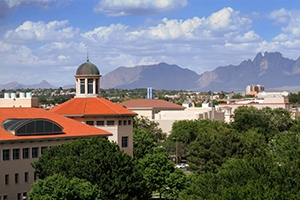 As the chief executive officer of the NMSU system, the system chancellor is responsible for providing transformative leadership, focus and strategic vision, said the search firm.

The individual has full executive responsibility for higher education leadership and effective management and operation of the flagship university and the system as a whole.

“We’re continuing to work with Wheless Partners to actively solicit candidates to be our next chancellor,” said Mike Cheney, who chairs the university’s chancellor search committee. “We want to go after people who may not even be thinking of switching jobs at this time but who might be the perfect fit for NMSU. We also want to make sure we find the right person who understands the culture and diversity of our region.”

The state of higher education has changed in recent years, said Mr. Cheney, and is expected to continue a rapid transformation in the years ahead. “In light of increased competition, elevated attention to student value, reduced funding for research dollars, a push for a more efficient delivery model and continued funding challenges, this search must be conducted differently,” he said. “We will solicit candidates equipped to help NMSU prosper in the coming decade as opposed to merely reviewing applications we receive.”

The Board of Regents said it received more than 10 proposals for the assignment, according to the Las Cruces Sun-News.

Finalists are expected to be brought to campus in April. The new chancellor will begin his or her term on July 1.

Last summer, NMSU’s current president and chancellor, Garrey Carruthers, announced that he would be retiring this summer, at the end of his contract. A former Republican governor of New Mexico, Mr. Carruthers has been chancellor since 2013. Reportedly, he was willing to stay in the job another two years, but the Board of Regents informed him that his contract would not be renewed.

This month, the regents went one step further, passing a resolution that curbed Mr. Carruthers’ ability to hire and fire senior leadership and other positions during his remaining time, a move that was lambasted by state legislators as uncalled for and sending a dubious signal to candidates for the role. The regents chair and vice chair defended their actions in a letter to lawmakers: “Given our opportunity to improve student outcomes in enrollment retention and graduation rates – it is critical that the new chancellor has the ability to select as many members of his or her team as possible to ensure long-term success for growing NMSU.”

To replace Mr. Carruthers, the regents want an individual with integrity, high energy and demonstrated leadership and administrative abilities who can shape, articulate, lead and implement the purposeful, engaging and dynamic mission of NMSU, said Wheless Partners.

Why Universities Have Stepped Up Efforts to Involve Search Firms
Using a search firm to recruit a new president or provost today can cost colleges nearly $100,000 or more in recruiting fees. So, is it worth bringing in outside agencies to help?

Research compiled by James Finkelstein, a public policy professor at George Mason University, estimates that fees called for under executive search firm contracts with public colleges and universities for the 2015 / 2016 academic year averaged $78,769.

NMSU’s next leader will serve as a key catalyst in determining the future course and culture of NMSU, and in re-framing and elevating the brand of the university. Of major importance will be the system chancellor’s ability to understand the dynamic shifts in the traditional student as well as emerging competition and delivery models to meet the ever-changing landscape and challenge of higher education funding and financial well-being.

The university wants candidates who have earned a doctorate and an appropriate terminal degree or academic credentials sufficient to win respect from the higher education community and the community at large, said the search firm. Proven, appropriate executive leadership experience in non-academic sectors may also be considered. Prospects must also be able to obtain and maintain a security clearance.

The search committee was formed in November. Of its 19 members, 53 percent are from the academic community and 47 percent are external stakeholders.

NMSU is the Land of Enchantment’s land-grant institution, a comprehensive research institution, with an emphasis on teaching, research and public service and outreach. Founded in 1888, it is the oldest public university in New Mexico. NMSU serves a multi-cultural population of students and community members across the state at five campuses, a satellite learning center in Albuquerque, cooperative extension offices located in each of the state’s 33 counties, 12 agriculture research and science centers, four community colleges and through distance education.

NMSU ranks among the top 10 for Hispanic and Native American bachelor’s degrees awarded. As such, the next leader is expected to demonstrate the ability to aggressively improve student outcomes in minority populations, said Wheless Partners. It is preferred that candidates speak both English and Spanish.

Wheless Partners, founded in 1986, conducts management, executive and board searches across all industries and functions. It also handles succession planning, talent mapping and interim executive solutions, among other services. The firm has worked with Fortune 500 companies, mid-size operations, leading public and private institutions, investment portfolio companies, not-for-profit foundations and start-ups.

The firm has offices in New York, Atlanta, Birmingham, Houston, Dallas/Fort Worth, Denver and San Francisco.