Menu
View our Events
Stay Connected:
Employers are searching far and wide for skilled talent and workers who were once sitting on the sidelines have begun to return to the labor market in response. A new workforce report by ADP offers a region-by-region breakdown of wage growth in recent months as well as what’s on the horizon. Let’s take a look at the latest findings. 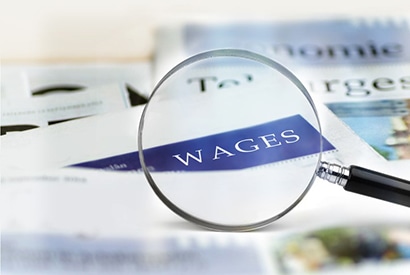 July 26, 2018 – Wages for U.S. workers grew three percent over the last year, increasing the average wage level by 80 cents to $27.46 an hour, according to the latest ADP “Workforce Vitality Report.” The report tracks the same set of workers over time, which provides a more insightful picture of wage growth than overall wage growth.

The growth, steady at three percent annual as of last month, was driven by strong wage gains for workers in the professional and business services industry representing almost 17 percent of the workforce (3.4 percent wage growth, $35.04 average hourly wage), in the Northeast (3.5 percent, $30.88) and from large businesses (3.5 percent, $28.50). Employees in the resources and mining industry saw their wages decrease (-3.7 percent, $33.84) and businesses with 500 to 999 employees experienced the slowest wage growth (1.6 percent, $28.73).

“We’re seeing interesting shifts in labor-market dynamics this quarter,” said Ahu Yildirmaz, co-head of the ADP Research Institute. “Employment growth for new entrants has dipped to -0.1 percent, while it has increased by 4.5 percent for those who are 55 and older.”

“In addition, job switchers who are 55 and older are seeing wage growth of 6.3 percent which is 1.5 percent higher than the prime workforce group who are 35-54,” Dr. Yildirmaz said. “This shift suggests employers are searching far and wide for skilled talent and workers who were once sitting on the sidelines have begun to return to the labor market in response.”

espite Drop in Unemployment, Wages Remain Concern for Many Workers
With unemployment hovering at 4.1 percent, many companies face the recurring question of how to attract and retain top talent in a candidate-driven landscape. In order to remain competitive, it is essential for companies to focus on trying to boost wages…

According to the ADP report, job switchers in professional and business services and construction also realized high wage growth of 9.1 and 7.1 percent, respectively. In trade, the largest sector, job holders experienced stronger growth in wages than the workers who switched to the industry, 5.1 percent versus 3.4 percent.

Median total direct compensation (TDC) for CEOs increased 8.7 percent to $13.4 million, said Korn Ferry. That is twice as much as last year’s 4.2 percent increase in TDC and the highest percentage increase since 2010, the first year of recovery from the Great Recession. While year-over-year base salaries remained relatively flat, with a 1.5 percent increase to a median of $1.3 million, a large percentage of the TDC increase came from performance-based compensation growth, said the study. Annual bonuses were up 4.1 percent. And long-term incentive value (LTIs) were up 7.4 percent.

ay for Performance: Not Everyone Agrees On CEO Value
Public company directors give CEOs considerable credit for corporate success, believing that 40 percent of a company’s overall results, on average, are directly attributed to the CEO’s efforts, according research released by Heidrick & Struggles and the Rock Center for Corporate Governance at Stanford University.

“Given the continued low rates of inflation and the ongoing pressure on profit margins, employers remain cautious when it comes to budgeting salary increases,” said Laura Sejen, managing director for rewards, at Willis Towers Watson. “While most companies are feeling little pressure to increase budgets relative to what we’ve seen in recent years, many are starting to question how those budgets are spent and whether their conventional approaches to salary planning are delivering a good return on that three percent investment.”