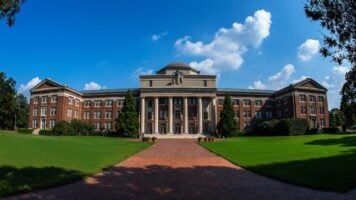 May 3, 2022 – Spencer Stuart has assisted in the recruitment of Douglas Hicks as the 19th president of Davidson College in North Carolina. He succeeds Carol Quillen, who announced in August that she is stepping down after 11 years as president. “Doug learned and led at some of our nation’s top liberal arts colleges,” said Alison Hall Mauzé, chair of Davidson’s board of trustees. “He began his teaching at one of the country’s first leadership schools and led the faculty at a prestigious university. As the dean of Oxford College, at Emory, he has strengthened the sense of community and propelled initiatives that are in sync with Davidson’s priorities and collaborative work, including reckoning with historical ties to enslavement and creating new approaches to preparing students for careers in a complex and changing world. He understands where we are now and has charted a path ahead.”

“I can say with confidence that this has been the most wide-open search in the history of the college, and in 2022, that’s as it should be. We could have selected any candidate in the world,” said Anthony Foxx, former U.S. transportation secretary and chair of the search committee. “Doug emerged out of that competition as the absolute right candidate with the best combination of qualifications and characteristics to best guide Davidson in its next chapter.”

The search committee of trustees, students, faculty, and staff held eight forums, virtually and in-person, since last fall to gather ideas from the Davidson campus, alumni, and friends of the college on the qualities needed in the next president. Spencer Stuart assisted the committee in identifying candidates, screening them, and conducting extensive interviews with, and research on, the finalists.

Oxford College, which Dr. Hicks leads, is Emory’s original campus and is now a highly selective, two-year liberal arts institution whose graduates segue to another college within Emory for their final two years. Dr. Hicks is a co-leader for all of Emory in memorializing the enslaved people whose labor helped build the Oxford campus, a project that parallels Davidson’s efforts toward a similar commemoration. He doubled the diversity of Oxford’s faculty and leads a student body that is more than two-thirds domestic students of color or international students. He secured the first naming of an Emory University academic building after a black leader, the late Judge Horace Johnson, a friend and mentor.

“Doug is a leader who brings a range of voices around the table who represent the community around us, not just demographically, but in thought, in political ideology, to just how we think about the world,” said Teresa Rivero, lead senior program officer at the Bill & Melinda Gates Foundation and an Emory trustee. “It takes a nuanced leader to be comfortable in that messiness. He will step into that role and be a leader, not just for the Davidson community. He will have an impact on how higher ed institutions model this for the rest of the country.”

Dr. Hicks is a Davidson alum who earned a Harvard University doctorate degree and built a career of leadership roles in higher education that stretch from upstate New York to Georgia. “Davidson changed my life,” Dr. Hicks said. “There, I grew up. I had the opportunity to learn in new ways, to meet students from across the country, to play varsity baseball in my first year, to study abroad in Madrid, to meet an incredible group of friends and to be challenged by wonderful teacher-mentors, whom I consider lifelong friends. I’m excited to return as president and even more excited about the future that we will build at Davidson.”

Davidson College is a private liberal arts college in Davidson, NC. It was established in 1837 by the Concord Presbytery and named after Revolutionary War general William Lee Davidson, who was killed at the nearby Battle of Cowan’s Ford. Today, the college offers 37 majors and 39 minors in liberal arts disciplines as well as other interdisciplinary academic programs. It enrolls 1,973 students from 50 states and territories, Washington, D.C., and 46 countries.