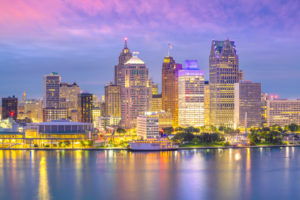 January 7, 2021 – Executive recruitment firm SearchWide Global has assisted in the placement of Claude Molinari as the new president and CEO of the Detroit Metro Convention & Visitors Bureau (DMCVB). He is replacing Larry Alexander, who announced in June that he would be retiring after 22 years as head of the organization. Senior vice president Kellie Henderson led the assignment.

“Claude is uniquely positioned to accept this new role,” said Christina Lovio‐George, chair of the search committee and DMCVB board member. “He knows the DMCVB business, he understands the role of tourism, meetings and conventions as an economic driver in the region, and he intimately understands the challenges the tourism and hospitality industry are facing now as it deals with the impact of COVID-19.”

“Looking toward the future, Claude’s deep understanding of the vital role the TCF Center plays in the overall economic health of the entire Detroit region will be invaluable as the partnership grows to new levels,” said Mr. Alexander.

According to the search committee, 14 candidates were considered for the position. Mr. Molinari was chosen for his expertise in the meetings and travel industry, which includes nearly 10 years at TCF Center. While serving as general manager. His responsibilities there included developing a budget, negotiating with local trade unions, and implementing safety and crisis management programs. Mr. Molinari’s history at TCF Center began when it was the former Cobo Center. There he served as assistant general manager from 2011 to 2016 with oversight of operations, security, events, and production services and union labor services. Mr. Molinari currently serves on the board of directors for the DMCVB and the Michigan Minority Supplier Development Council. He is a member of the International Association of Venue Managers, International Association of Events and Exhibitions.

In his new role at the DMCVB, Mr. Molinari will be tasked with bringing travelers and meeting business back to the Detroit area. He will also lead the creation of an annual sales and marketing plan and oversee the Detroit Sports Commission, a DMCVB subsidiary.

The Detroit Metro Convention & Visitors Bureau is the only organization that promotes metro Detroit regionally, nationally and internationally as a convention, business meeting and tourism destination. To achieve this goal of soliciting and servicing the area’s second-largest industry, the organization works with the Detroit and Windsor area business community, civic organizations and local government offices in Wayne, Oakland and Macomb counties

SearchWide Global, based in St. Paul, MN, is a full service executive recruitment firm primarily for companies in the travel, tourism, hospitality, convention, trade association, venue management and experiential marketing industries. The firm specializes in C-level and director-level executive searches for companies ranging in size from Fortune 500 corporations to mid-sized public and private companies and associations.

Ms. Henderson works in all sectors of hospitality, travel and tourism. She has experience recognizing clients’ needs, identifying best-in-class talent. She also leads SearchWide Global’s industry-wide diversity initiative. She serves on the Destinations International Foundation board of trustees is involved in several other industry organizations. Previously, Ms. Henderson worked in the DMO and hotel industry.

“I would like to thank SearchWide Global, a highly respected leader in our industry; the members of the search committee, who spent numerous hours helping to identify the right candidate; the many candidates who graciously met with us during the process; the VisitPITTSBURGH leadership team who continue to help guide us through this pandemic; and the entire VisitPITTSBURGH staff who are tirelessly working on retaining future business and sports events as well as targeting future leisure travelers,” said Bryan Iams, chairman of the VisitPITTSBURGH’s board of directors.