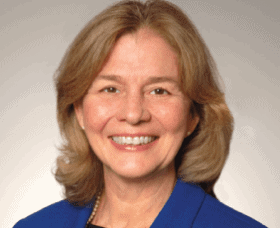 Susy specializes in searches for executives for companies, associations, foundations, and not-for-profit organizations. An engaging personality enables Susy to develop close working relationships with candidates and to strengthen her network of contacts. Clients benefit not only from her easy access to a large talent pool but also from her special expertise in working with boards of directors to bring on new, top-level management.

In addition to an emphasis on not-for-profit executive positions, Susy serves as the leader of The McCormick Group’s communications and public relations group. She is responsible for conducting searches for senior communications positions for a diverse range of Fortune 500 companies, associations, and public relations firms. Representative placements include: numerous president and chief executive officers for local and national not-for-profits and foundations, vice presidents of media/public relations for Fortune 500 companies in a variety of industries, and communication directors and specialists for many associations. At The McCormick Group, she has been recognized for outstanding performance, she has been a member of the President’s Circle for five years, and she was the recipient of the President’s Outstanding Contribution to the Company award.

Susy has an extensive background in public and congressional relations. Prior to joining The McCormick Group, she held prominent positions in the federal government, most notably as Deputy Treasurer of the United States and as Deputy Under Secretary of Commerce for Economic Affairs. She also served as the Executive Director of a not-for-profit foundation. She is co-author of Getting Started, a primer on how to found a citizen action group.

She received a Bachelor of Science degree in Education from Brigham Young University. As an active community and civic volunteer, Susy is an honorary member and former board member of The TWIG of Alexandria, which is an auxiliary of Alexandria Hospital, and she is a former member of the vestry of Grace Episcopal Church and of the Board of Directors of Grace Episcopal Day School. She is originally from El Centro, CA.