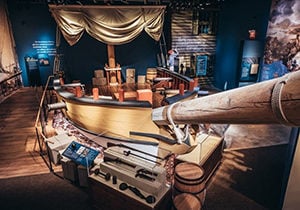 August 14, 2018 – Boutique executive search firm Phillips Oppenheim has been chosen to find the next president and chief executive officer for Philadelphia’s newest museum, the Museum of the American Revolution. Mark J. Tarnacki and Adelaide K. Jones are leading the search.

The museum’s previous leader, Michael C. Quinn, stepped down last March after six years of steering the historical attraction to fruition. John P. Jumper, chairman of the board of directors, is serving as acting CEO until a successor is found. The museum enjoyed a successful opening in April 2017. Its new leader will be expected to assume a highly visible external role, serving as a spokesperson and marketer to strengthen the museum’s position among Philadelphia’s historic and iconic landmark destinations, said Phillips Oppenheim.

The president and CEO will be charged with providing fiscally sound leadership while securing a sustainable mix of both earned and contributed income. This person will be responsible for enhancing visitorship, targeting and attracting new audiences, building a national profile and stewarding institutional growth in advance of key historic milestone events, such as America’s 250th in 2026 and the 100th Anniversary of Women’s Suffrage in 2020, said the search firm.

Among the other priorities and responsibilities of the role, the president and CEO will review the museum’s newly established strategic plan, build upon existing plans and strategies, and as a result, adopt and champion a well-articulated vision for the museum going forward; spearhead institutional growth, set priorities and allocate resources to achieve the museum’s performance goals and expectations, said Phillips Oppenheim.

Candidates are expected to have a proven track record as an executive responsible for leading a significantly complex non-profit institution or for-profit enterprise, said the recruitment firm. Experience working within a museum, while not required, is desirable.

Other requirements include: experience aligning strategic plans with institutional capacity and fiscal resources; the ability to set goals and objectives and course correct as necessary; having a willingness and ability to seek and obtain buy-in from all constituencies in order to implement that direction. The ideal candidate would be a persuasive and accomplished fundraiser, with strong external relations and marketing skills. The person should be able to show successful results in identifying, cultivating, and soliciting individual donors, foundation grants and corporate sponsorships, and be able to connect with untapped philanthropic resources, potential partnerships and other revenue-generating opportunities.

Candidates should also have a proven track record of effective and respected management; success in building and retaining staff with the strength to engage, inspire, and unite others to new levels of effectiveness, transparency, and programmatic impact; the ability to break down silos and to delegate, handle and prioritize multiple activities and responsibilities, among other requirements.

The Museum of the American Revolution is a private, nonpartisan and non-profit organization. It explores the dramatic, surprising story of the colonial conflict with the British through its collection of Revolutionary-era weapons, personal items, documents and works of art. Immersive galleries, powerful video, theater and interactive digital element experiences vivify the diverse array of people that created a new nation against incredible odds.

The museum holds an expansive collection of several thousand Revolutionary-era artifacts, including a number of George Washington’s personal belongings, as well as an impressive assortment of weaponry, soldiers’ and civilians’ personal items, fine art, letters, diaries and manuscripts.

Phillips Oppenheim’s Ms. Jones has been a principal, on a project basis, with the firm since 1992. Before that, she spent 10 years at Harvard University as an administrator where she designed and ran the first Career Services Office at the John F. Kennedy School of Government and then served as the director of admissions for the graduate program in international law at the Harvard Law School.

Mr. Tarnacki has led executive searches in the non-profit, financial services and media sectors for over twenty years. Since joining Phillips Oppenheim in 2001, he has developed an extensive track record of recruiting chief executives, COOs and CFOs for a broad range of clients including, but not limited to, community and economic development, philanthropy, museums and other cultural institutions and environmental, conservation and preservation organizations.

The firm recently recruited senior leaders for other non-profit organizations, including Max Hollein as the new director of the Metropolitan Museum of Art; Matthew Teitelbaum as executive director of the Boston Museum of Fine Arts; Salvador Salort-Pons as director, president and CEO of the Detroit Institute of Arts; Linda McNeil Tantawi as CEO for the Greater New York City affiliate of Susan G. Komen for the Cure; and Judy Harris Kluger as executive director of Sanctuary for Families.