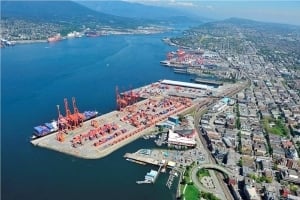 October 30, 2017 – PFM Executive Search has placed Ewan Moir as the president and CEO of Nanaimo Port Authority (NPA) on the west coast of Canada. He takes over from Bernie Dumas, who recently retired. Co-founder and partner George Madden led the assignment. PFM also helped place Mr. Dumas eight years ago.

“The board conducted an extensive search and met with many highly-qualified applicants,” said Moira Jenkins, chair of the Nanaimo Port Authority. “Ewan’s worldwide leadership and management experience really stood out and we were unanimous in our decision. His people-focused leadership style, vast industry expertise and exceptional business development skills will serve to build on the excellent foundation already established at NPA.”

Most recently, Mr. Moir served as president and COO of Pacific BioEnergy Corp. in Vancouver. He was also president of Mainland Sand and Gravel, an SVP at SNC-Lavalin, president and CEO of Fraser River Pile and Dredge Inc., and held senior positions at Finning International.

Mr. Moir “is known as an analytical thinker with a strong record of initiating and implementing business strategies to develop sustainable and profitable growth,” according to the NPA.

In his new role, Mr. Moir’s mission will be to engage the NPA’s community partners – the city and Snuneymuxw First Nation – to develop a relationship that ensures that all members work together for the future.

NPA strives to be the transportation and marine recreational gateway on Vancouver Island, serving the Pacific Rim and beyond. Three distinct operations and administration are conducted within the Nanaimo Port Authority’s harbor limits. These include deep sea vessel management, debris control and environmental protection, harbor safety and security. Cargo handling through its commercial terminals also helps make the port a significant economic generator.

Based in Vancouver, PFM serves an array of industries, working with private, public and not-for-profit organizations to fill senior-level executive roles. The firm has recruited a number of leaders for non-profits, including the CEO for Creative BC, the executive director of Integrated Health Services, the CEO for Fraser Health Authority, the chief medical health officer for Northern Health Authority, the chief financial officer at Capital Regional District and the CEO of the Canadian Breast Cancer Foundation.

Mr. Madden is a 20-year veteran of the executive search industry. His professional accomplishments in communications, public affairs and management have made him a well-known figure in Canadian business.

The Port Authority of Allegheny County has enlisted executive search firm Krauthamer & Associates to find its next CEO. The Hillman Family Foundation agreed to provide $100,000 to cover most of the cost for the Pittsburgh-based port authority to hire a search firm to help find a new CEO, said Adam Brandolph, authority spokesman.

ADK Consulting & Executive Search has been retained by the Columbus Regional Airport Authority to lead its search for a chief development officer. This position offers a compensation package in the range of $190,000 to $220,000. The Columbus Regional Airport Authority supports nearly 40,000 jobs and provides for more than $4.6 billion in total annual economic output.