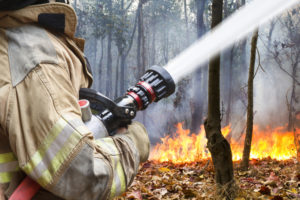 “This leadership position represents a great opportunity to leave your mark on a fire district that is desiring a strong, visionary, collaborative leader,” said Peckham & McKenney. “If you have the ability to lead by example and balance a command presence with humility, this might be the opportunity you are looking for.”

The fire chief serves as chief executive officer of the American Canyon Fire Protection District and assumes total management responsibility for the functions of fire prevention, fire suppression, emergency medical services, and the safety of the community and workforce, said the firm.

The new fire chief must be skilled in program evaluation, productivity improvement and cost-benefit analysis, said Peckham & McKenney. The role also calls for capabilities in identifying, evaluating, motivating and developing supervisors and managers. The leader must be able to communicate clearly and concisely verbally and in writing. Other skills necessary for the role include: labor relations and negotiations; planning, directing and organizing fire prevention, suppression, advanced life support emergency medical services and support activities; establishing and maintaining cooperative working relationships with those contacted in the course of work; and dealing tactfully with the public.

Peckham & McKenney said that the selected candidate must possess strong ethics, openness, honesty, and responsiveness. The individual must also be proactive and have foresight for addressing community development issues. He or she should be able to deliver solutions consistent with best practices and fire district goals, among other capabilities.

The training and experience providing the required knowledge, skills and abilities must include 10 years of fire service experience, including at least three years at the rank of battalion chief or higher, said the search firm. Also required is a bachelor’s degree from an accredited college preferably with major course work in fire science, public or business administration. The board of directors may consider significant advanced work experience and accomplishments as an offset to the degree requirement; past experience working in a fire protection district is preferred.

The American Canyon Fire Protection District participates in automatic aid and mutual aid response plans with multiple agencies in Napa and Solano counties. The fire district has a paid staff of 22 and a general operations budget of $5.8 million, (the all funds budget totals $7.1 million). The fire district is staffed daily (24-7) with a minimum staffing level of five personnel. Staffing is accomplished by having 18 career firefighters assigned to three platoons. Career firefighting staff are augmented by up to 10 volunteer firefighters who currently respond to the station on an “on-call” basis.

Peckham & McKenney provides executive search services to local government agencies throughout the Western U.S. The firm is headquartered in Roseville, CA with regional offices in Southern California, Colorado and Texas. It was established in 2004 by Bobbi Peckham, who serves as president, and Mr. McKenney. Since its founding, Peckham & McKenney has conducted more than 600 executive-level recruitments in the states of Arizona, California, Colorado, Idaho, Nevada, New Mexico, Oregon, Utah, Washington and Wyoming.

Mr. McKenney has over 30 years’ management experience and is very familiar with local government agencies, having led a county organization and having worked with numerous city governments and special districts. He began his career in the resort and hospitality industry, serving in executive management positions with Martha’s Vineyard in Massachusetts as well as Keystone Resort in Colorado. He later became executive director of the Summit County Chamber of Commerce in Colorado. Mr. McKenney was then selected by Placer County, CA to lead the merger of the North Lake Tahoe Chamber of Commerce and the North Tahoe Visitors and Convention Bureau into the North Lake Tahoe Resort Association. He joined Ms. Peckham as an executive recruiter in 2003 and in partnership with her formed Peckham & McKenney in 2004.