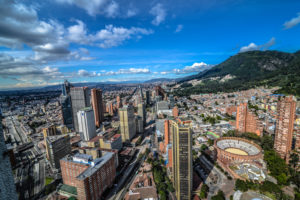 Odgers Berndtson Colombia will be led by managing partner Roberto Hall, a veteran of the Colombian executive search industry. “The Colombian launch will enable us to draw upon Odgers Berndtson’s global network and combine it with our experience of local markets across all the major cities in Colombia,” said Mr. Hall. “With Odgers Interim we will also have a critical differentiator to most of our competitors, providing us with the ability to meet the full spectrum of client talent demands, whether those are permanent or interim leadership.”

For Odgers Berndtson, the Colombian office marks another milestone in its expansion throughout Latin America and builds on its presence in Brazil and Mexico where it has offices in São Paulo, Mexico City and Monterrey. Initially, there will be 13 partners in Odgers Berndtson Colombia.

Bogotá is the main economic and industrial center of Colombia. The financial sector has grown favorably because of good liquidity in the economy, the growth of credit and the positive performance of the Colombian economy. The Colombian Stock Exchange through the Latin American Integrated Market (MILA) offers a regional market to trade equities. Colombia is now one of only three economies with a perfect score on the strength of legal rights index, according to the World Bank.

Odgers Berndtson’s 250-plus partners cover more than 50 sectors and operate out of 59 offices in 29 countries. The U.S. wing of the firm launched in 2011 and is one of the fastest growing search firms in the Americas. Odgers Berndtson currently has U.S. offices in Atlanta, Austin, Boston, Chicago, Dallas, Denver, Houston, Los Angeles, Miami, Minneapolis, New York, Philadelphia, San Francisco and Washington, D.C.

Odgers Berndtson has recently experienced a wave of growth. The firm recently opened an office in Salt Lake City, UT. The location is led by Evan McClure, a partner in the firm’s life science practice, who joined Odgers Berndtson last year and leads search engagements for CxO, vice president and board positions across the life science and healthcare verticals. With its numerous colleges, vibrant banking history and emergent tech industry, Salt Lake City is becoming one of our nation’s great talent hubs,” said Steve Potter, U.S. CEO of Odgers Berndtson. “We’re delighted to be opening our doors in this market and look forward to the growth and access this facilitates.”

The firm also appointed Clarke Havener as vice chairman, head of board services, and as a member of the firm’s aerospace, defense and national security sector. Mr. Havener has more than 35 years of experience in executive search and talent advisory roles. He has led more than 500 board, CEO and functional leadership searches with clients both in the U.S. and abroad. Most recently, Mr. Havener served for 11 years as the global sector leader, aerospace, defense and national security in Korn Ferry International’s Washington, D.C., office.