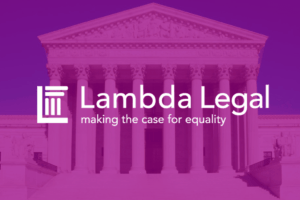 November 27, 2019 – LGBTQ focused search firm McCormack+Kristel and WB&B, an executive recruitment firm focused on diversity and inclusion, have together led in the placement of Kevin Jennings as the new CEO of  New York-based Lambda Legal, a national organization committed to achieving full recognition of the civil rights of lesbians, gay men, bisexuals, transgender people and everyone living with HIV through impact litigation, education and public policy work.

“Kevin’s deep roots in the LGBTQ movement, his expertise with federal public policy, his advocacy for immigrants and his personal experience as an educator raised in the South is a blend of attributes that make him the clear choice as the next CEO of Lambda Legal,” said board chair Anne Krook. “For nearly 50 years, Lambda Legal has been on the frontlines of the fight for LGBTQ rights in our courts on behalf of transgender students, workers fired for being gay, transgender service members and service members living with HIV. Now, more than ever, we need a leader who has cut his teeth in the movement and understands and embraces the significance of Lambda Legal’s legacy and commitment to the community.”

Mr. Jennings is currently the Tenement Museum president and founder of Gay, Lesbian and Straight Education Network (GLSEN). His contributions to the LGBTQ movement began in 1988, when he helped students create the first school-based Gay-Straight Alliance club, leading him to found and lead the GLSEN for 18 years. He then served as an assistant secretary of education for President Obama, after which he led the Arcus Foundation, the world’s largest foundation for LGBTQ rights organizations, for five years.

Reporting to the board of directors, Mr. Jennings will be a key leader in defining the LGBTQ+ civil rights movement in the 21st century. In collaboration with the board and staff, the CEO will define Lambda Legal’s vision and set its strategic direction. He will operationalize the day-to-day leadership, management, and planning necessary to ensure Lambda Legal’s continued growth and impact.

“Being Lambda Legal’s CEO is a dream job that anyone would love to have, and I am thrilled to be stepping into this role at such a critical time for Lambda and our nation,” said Mr. Jennings. “From my childhood as the son of Southern Baptist preacher to when I became a member of the Obama Administration, I’ve known what it’s like to be the target of hateful, anti-LGBTQ bullies, but those attacks only made me more determined to challenge them. I’ve devoted my life since I was a high school history teacher to advocating for LGBT people and everyone living with HIV, and I’m excited to join Lambda Legal to continue that work.”

Since its founding in 1993, McCormack+Kristel has completed more than 400 searches for CEOs, board members and C-suite executives for large and small nonprofit organizations across the country. Clients have included the ACLU, the Equality Federation, GLAD, Liberty Hill Foundation, the Los Angeles LGBT Center, MassEquality, Outserve/SLDN, PFLAG, Planned Parenthood, SAGE and the Tide Foundation.

Diversity recruiting has long been on the firm’s agenda. With the advent of effective treatments for HIV/AIDS, and the diminishing needs of many of these organizations, the firm broadened its client base into areas like social justice; healthcare; women’s issues; higher education; gay, lesbian, bisexual and transgender; civil rights and more.

WB&B has been recognized as one of the nation’s top minority-owned executive search firms. Established in 1973, its founding bylaws ensure an inclusive slate of qualified candidates for each client engagement. Since 2011, WB&B and McCormack+Kristel have partnered on several high-profile CEO searches including AIDS United, AIDS Foundation of Chicago and Amnesty International.