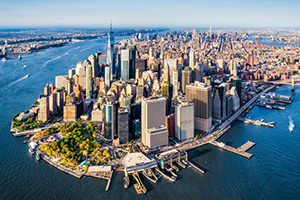 September 18, 2018 – U.K.-headquartered executive search firm La Fosse Associates continues its expansion in the U.S. with the opening of a new office in New York.

The opening builds upon the success of the firm’s first U.S. practice, in Los Angeles, which opened in 2016. With an already established executive network and strong track record in the New York metropolitan area, the New York office will allow La Fosse to better support its U.S. client-base, the firm said. The New York office is expected to provide more comprehensive support for U.K.-based companies looking to build teams on the East Coast.

“Following the success of our LA office, opening a second hub in New York, where we are already working with some of the world’s most prestigious brands, was a natural step,” said Johnnie Greenwood, executive vice president, who will head La Fosse New York. “The office develops the service we already provide to our U.S. and U.K. clients, further enabling companies to identify top talent and scale at pace.”

CEO James Parker said the New York opening is a milestone for the firm. “We offer technology, digital and change recruitment at all levels from the board down, and are confident this unique top to bottom capability is the best way to support our increasingly international client base,” he said.

The opening coincides with the U.S. Department of Labor’s recent announcement that job openings are outnumbering seekers for the first time on record across the U.S., a trend particularly striking in New York, where salaries have grown 2.2 percent in the last year, the firm said.

The New York opening comes at a time of significant growth for the city’s tech scene, which is seeing ballooning investments, multi-billion dollar exits and the creation of thousands of new jobs. La Fosse Associates is looking to continue its partnerships with the private equity and venture capital firms at the forefront of this market, and will be best placed to help them scale their portfolio companies, the firm said.

Perhaps no market is as vibrant, or challenging, for the executive search industry as New York. A decade since the last big recession rocked their world, bankers and other financial industry titans – and the recruiters who serve them – are thriving once again. But the many other organizations that call the Big Apple home, including giants of the non-profit world, retail, healthcare and media, among others, are also setting the pace for the rest of the country, and the world.

Here is a sampling of expansion activity within the search industry in New York City taken from the Hunt Scanlon Media archives:

McDermott & Bull expanded into New York City. Stu Leibach, principal consultant and industry specialist within the firm’s retail practice, is based out of the new location. “Now more than ever, identifying the right executive talent is critical to success in the modern retail landscape,” said Mr. Leibach.

Mr. Greenwood will be responsible for building out and further establishing the firm’s U.S. offering. Over the last four years, he has successfully built the La Fosse interim capability into one of the market leaders in the U.K. and Europe. He partners with clients to place board, executive and advisory positions across private equity and Fortune 500 companies.

La Fosse Associates has also announced the introduction of a new division placing chairman and non-executive director (NED) roles. The division will be led by Jack Denison, who will be working with Louis Rado, founder of the NED Network.

The team is working with clients across various industries, particularly in private equity. They are currently engaged on a number of assignments, said the firm, including a chairman role at a high-profile FTSE 250 business.

“We’ve seen a remarkable demand, reflecting the value chairmen and non-executive directors add in both fast-growing young firms and established players,” said Mr. Dension. “With the increasing success of our Interim function, establishing this practice was the next logical step. It will allow us to continue providing our clients with the best possible assistance in a competitive market and we are looking forward to the challenge.”

La Fosse Associates takes a values-led approach. The firm is co-owned, with 40 percent of equity being gifted to staff over time. The firm has a compound annual growth rate of 38.2 percent, more than three times the industry average, said La Fosse. The firm recruits across a range of areas: executive leadership; interim management; change and transformation; digital and development; ERP & CRM systems, information and cybersecurity; strategy and architecture; BI, data and analytics; private equity; and VC-backed start-ups.