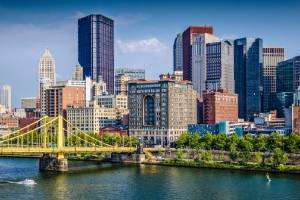 November 30, 2017 – The Port Authority of Allegheny County has named Katharine Eagan Kelleman as its new CEO.

The Hillman Family Foundation provided $100,000 to cover most of the cost for the Pittsburgh-based port authority to hire the search firm, said Adam Brandolph, authority spokesman. Former CEO Ellen McLean, was voted out by the authority’s board of directors in February.

“Our vision for this position has been to replicate the success that we’ve seen at the airport,” said Rich Fitzgerald, county executive. “The search has been about finding a person who reaches out, collaborates with the broader community and embraces new technology, innovation and partnerships while understanding the need to connect our constituencies in new ways to their destinations.”

The Port Authority began its search in April with the assistance of Maryland-based Krauthamer. The nationwide search led to the receipt of 43 applicants, presentation of 14 candidates, Skype interviews of eight candidates, in-person interviews of four candidates and a round of second interviews for two of the candidates.

“Katharine has proven experience in running a transit agency, is collaborative and community-focused, and understands the need to enhance the customer experience,” said Mr. Fitzgerald. “I’m excited about the energy that she brings to the table and look forward to a fresh approach to transit in our region.”

Previously, Ms. Kelleman was CEO of the Hillsborough Area Regional Transit Authority (HART). Under her leadership, HART expanded public-private partnerships; pursued travel options beyond traditional transit; launched a regional fare program; and launched HART HyperLink, the country’s first transit agency-operated rideshare program. Prior to stepping into the role of CEO, Ms. Kelleman was HART’s COO from 2010 to 2015. She has also worked in the MTA of Baltimore, Dallas Area Rapid Transit and the City of San Angelo, TX.

“Katharine’s credentials highlight her well-balanced experience along with a deep understanding of the importance of transit systems in connecting people to every aspect of their lives,” said Jennifer Liptak, chair of the search committee. “Fundamentally, transit has become one of the most important, core infrastructure needs of our community. It touches constituencies from all socio-economic backgrounds, connecting communities and neighbors throughout our county,” she said. “We look forward to having Katharine join our team and providing her the opportunity to execute her vision for our agency moving forward.”

Ms. Kelleman and the Authority have agreed to a five-year contract with a base salary of $230,000. She will assume her new position in January.

“The Pittsburgh region has an international reputation as a hub for disruptive and dynamic innovation,” said Ms. Kelleman. “It’s also home to an incredibly strong sense of community and civic engagement. The Port Authority is one of America’s bedrock transit systems, and this is a once-in-a-lifetime opportunity to combine 21st century mobility with an excellent customer experience.”

The Port Authority of Allegheny County is a public transit authority that provides fixed route transit and advance reservation paratransit services in Pittsburgh and Allegheny County, PA. Located in the second largest metropolitan area in Pennsylvania, it is the nation’s 26th largest transit agency and provides its fixed route transit services through utilizing light rail, buses and inclines.