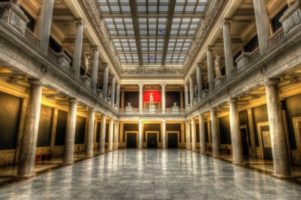 December 2, 2019 – Alison P. Ranney and Alexandra N. Corvin of Koya Leadership Partners have teamed up to place George Washington University (GW) president emeritus Steven Knapp as the new president of Carnegie Museums of Pittsburgh. “This is a significant opportunity to lead one of the most important cultural institutions in our country,” said Ms. Ranney.

“Steve is such an accomplished and thoughtful leader, and a real champion of interdisciplinary collaboration and community engagement,” said Bill Hunt, chair of Carnegie Museums of Pittsburgh’s board of trustees. “He’s a convener and an exceptional strategist, and he immediately stood out to us as the kind of visionary leader who will be a strong voice not only for Carnegie Museums but also within the greater Pittsburgh region.”

During Dr. Knapp’s 10-year tenure as GW’s president, he spearheaded the university’s groundbreaking collaboration with the Corcoran Gallery of Art and the National Gallery of Art, through which the Corcoran College of Art and Design was transferred to GW and became the Corcoran School of the Arts and Design. He was also instrumental in partnering with the world-renowned Textile Museum, which led to the creation of the George Washington University Museum and the Textile Museum, and he oversaw the construction of GW’s new Science and Engineering Hall, which doubled the space available for science and engineering and brought together researchers across disciplines to encourage collaborative innovation. Under Dr. Knapp’s leadership, GW created its first office of diversity, equity and community engagement, launched the freshman day of service and other community-service programs, and ushered in new interdisciplinary programs and entities as part of its Vision 2021 strategic plan, including the GW Cancer Center, the Autism and Neurodevelopmental Disorders Institute, the Global Women’s Institute, the Sustainability Collaborative and the Urban Food Task Force. Since retiring from GW in 2017, Mr. Knapp has continued teaching English there.

“No city of comparable size has the wealth of cultural and educational institutions that Pittsburgh enjoys,” Dr. Knapp said. “And no institution contributes more to that richness than Carnegie Museums of Pittsburgh. Each of its world-class museums is extraordinarily distinguished in its field, and I have no doubt that future increased collaborations among the museums and with the institutions surrounding them will only increase their impact, as well as their contribution to establishing Pittsburgh even more strongly as a cultural and intellectual destination.”

“The Carnegie Museums will benefit from the kind of collaborative leadership Steve brought to the George Washington University,” said Thomas LeBlanc, Ph.D., the university’s current president. “His ability to forge connections across disciplines and between the university and D.C. institutions was a great asset to GW and redounded to the success of our students.”

Since its founding in 1895, Carnegie Museums of Pittsburgh has grown far beyond founder Andrew Carnegie’s expectations. It operates an art and natural history museum, the Carnegie Science Center and its satellite Highmark SportsWorks, the Andy Warhol Museum and the 2,200-acre Powder Mill Nature Reserve in Westmoreland County. The museum consortium has an annual budget of $55 million and more than 1,000 employees. In 2018, Carnegie Museums of Pittsburgh had record admissions of 1.08 million visitors and saw an eight percent growth in membership at a time when most cultural organizations’ memberships were declining.

The organization initially retained Boyden for the assignment. Both finalist candidates, however, reportedly rejected the job, citing concerns with salary and museum governance. Mr. Hunt told the Pittsburgh Post-Gazette that the organization was disappointed in the results of the initial search. “This mid-search change of lanes isn’t entirely unusual,” Mr. Hunt wrote in an email sent to trustees in May. “Most executive search firms have their own unique networks that they tap for leads, so it’s often to a client’s benefit to work with more than one firm during the life cycle of a search.”

Koya Leadership Partners is an executive search and strategic advising firm dedicated to connecting talent with mission-driven clients. The firm partners with non-profits and NGOs, institutions of higher education, responsible businesses, and social enterprises in local communities and around the world. It was recently acquired by Diversified Search of Philadelphia.

With the combination of revenues and resources, Diversified Search and Koya will represent one of the largest non-profit and higher education practices in the executive search industry. The merger will also create one of the largest executive search firms in the U.S. marketplace, with combined projected annual revenue in excess of $80 million. According to Hunt Scanlon Media, Diversified checked in as the 11th largest search firm in the Americas, posting revenues of $60.1 million, a 16.2 percent increase from the year before. Meanwhile, Koya ranked 28th with revenues of $14.2 million, up 35 percent.

Ms. Corvin serves as an executive search principal at the firm. She specializes in recruiting senior executives to mission-driven client organizations. A founding member of Koya’s Chicago office, she later returned to her hometown of San Francisco and is a key member of Koya on the West Coast.

Ms. Corvin joined Koya from Russell Reynolds Associates, where she helped build the firm’s non-profit and education search practice in the Midwest and worked with leading non-profits across the country and around the world. She has helped recruit CEOs, presidents, executive directors, CFOs and vice presidents for a wide range of mission-driven organizations. She has expertise working with foundations, cultural institutions, professional organizations and other nonprofits as well as colleges and universities.