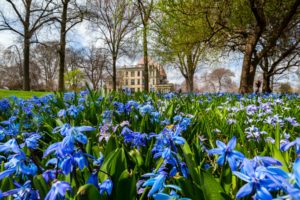 May 9, 2019 – Executive search firm Phillips Oppenheim has been picked to find a new executive director for The Frick Pittsburgh. Principal Mark J. Tarnacki and partner Becky Klein are leading the assignment.

The Frick Pittsburgh is a complex of museums and historical buildings in the residential East End of Pittsburgh devoted to the interpretation of the life and times of industrialist and art collector Henry Clay Frick.

The Frick’s previous executive director, Robin Nicholson, stepped down in February to become executive director/CEO of Telfair Museums in Savannah, Ga. Judith Hansen O’Toole, director emerita of the Westmoreland Museum of American Art in Greensburg, PA, will continue to serve as interim executive director until a new leader is hired.

The Frick board expects to hire a permanent leader by the end of the year. “The board of trustees looks forward to a nationwide search to attract a candidate that can build upon and expand the vision and strategic plan that have been laid out for the next several years,” said Chip Burke, chair of the Frick’s board of trustees.

The executive director is charged with providing the strategic leadership, creativity, management and direction necessary to advance the mission of the Frick Pittsburgh, and pursue a clear and impactful vision going forward, said Phillips Oppenheim. The organization’s new leader is expected to embrace the Frick’s sense of place, particularly Henry Clay Frick and his family’s role in the emergence of Pittsburgh as an industrial center and the history of Clayton, the Frick family mansion, as an iconic example of Gilded Age living.

Overseeing a complex, multi-site venue, the executive director will serve as a visible ambassador for the Frick and have a strong desire to engage with the greater Pittsburgh community on multiple levels, said the search firm. The individual will be expected to ensure excellence in the Frick’s curatorial, educational, marketing and operational endeavors, finding creative ways to deliver outstanding programming and engage the community while nurturing and balancing the institution’s rich history, diverse collections and beautiful grounds.

The executive director will also be responsible for the overall financial condition of the institution, including annual and long-term plans and budgets, securing philanthropic support and maximizing sources of earned income. The next leader is expected to engage trustees and staff in a focused assessment of the current and future infrastructure and operating requirements of the campus and collection and respond accordingly.

The ideal candidate will have a deep interest in and a passion for the current and future role of the Frick Pittsburgh, said Phillips Oppenheim. He or she should be an inspirational leader with vision and well-honed management skills, along with a demonstrated ability to see the big picture, manage multiple priorities and engagement strategies, and translate ideas into workable actions and priorities.

The Frick Pittsburgh wants a team builder with a record of achievement in bringing about change in exciting and creative ways, said the search firm. The ideal prospect will be someone who will motivate staff to be creative with the goal of making the Frick more relevant, accessible and meaningful. The person must be able to grow an organization in size, impact and visibility, while aligning ambitions with organizational capacity and fiscal resources.

Senior-level experience in a museum or associated institution that is known for its quality and excellence is required. Experience with a historic house is not necessary, but it is expected that the executive director will be an enthusiastic advocate for Clayton. Candidates must also have working relationships with the national and international arts community, including knowledge of museum trends.

Located on the Pittsburgh estate of late-19th-century industrialist Henry Clay Frick, The Frick Pittsburgh is the steward of collections left as a legacy to the city by Frick’s daughter, Helen Clay Frick. The permanent collections include fine and decorative arts, cars, carriages, historic objects, and buildings.

Phillips Oppenheim, founded in 1991, provides mission-driven organizations with senior leaders from the business, public and non-profit sectors. It sponsors roundtable discussions, participates in workshops and conferences and acts as informal counsel to non-profit organizations and their boards. Among its large list of clients: New York City Ballet, the Museum of the American Revolution, the Metropolitan Museum of Art, the National Arts Club, Table to Table, the African Wildlife Foundation and the Barack Obama Presidential Museum, among many others.

Mr. Tarnacki has led executive searches in the non-profit, financial services and media sectors for over 20 years. Since joining Phillips Oppenheim in 2001, he has developed an extensive record of recruiting chief executives, COOs and CFOs for a broad range of clients including, but not limited to community and economic development, philanthropy, museums and other cultural institutions and environmental, conservation and preservation organizations.