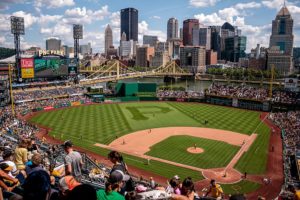 Mr. Cherington has more than two decades of experience at nearly every level of a baseball operations department. He was the Pirates’ pick from a field of finalists that also included interim GM Kevan Graves, Brewers assistant GM Matt Arnold and Astros director of player development Pete Putila.

Previously, Mr. Cherington served as vice president of baseball operations for the Toronto Blue Jays. Before that, he was GM of the Boston Red Sox for four years, winning the World Series in 2013. A graduate of Amherst College, Mr. Cherington started with the Red Sox as an area scout in 1999 and moved up the organization under then-GM Theo Epstein.

In his new position with the Pirates, Mr. Cherington will be working with a team that has struggled through three losing seasons in the past four years. Another challenge will be overcoming a small-market budget and a middle-of-the-pack farm system. Over the past several years, the team has also lost key players to trades and free agency.

Mr. Bloom is a 36-year-old Yale graduate who worked 15 years in the Rays organization, starting as an intern and spending the last three years as a senior vice president of baseball operations.

“We believe Chaim is exactly the right person to lead the Boston Red Sox baseball operation based on a number of attributes we sought in this process,” Red Sox principal owner John Henry said. “We had done exhaustive work narrowing down candidates. That work led us to Chaim, who was the first executive invited to Boston for an interview. He made a strong impression on all of us and validated our initial research that he was the one to lead our baseball operation.”

Korn Ferry’s sports practice is led by Jed Hughes, who is well known for identifying, assessing and developing leaders for sports organizations. His relationships in sports and intercollegiate athletics are extensive, having spent 20 years coaching in professional and intercollegiate football and working for five Hall of Fame coaches. He also led the development of psychological testing, competency development and structural behavioral interviewing for the San Francisco 49ers and Green Bay Packers. Jason Belzer of Forbes has called Mr. Hughes the most valuable connector of the sports industry.

Korn Ferry has a history of working with Major League Baseball, having placed Rob Manfred into the commissioner’s post. The firm also helped the Milwaukee Brewers and Toronto Blue Jays in searches that resulted in the hiring of first-time GMs David Stearns and Ross Atkins