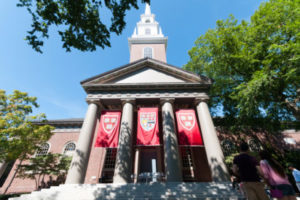 July 30, 2020 – The role of chief diversity officer is expanding at universities across the country. It has, in fact, become one of the most important positions for shaping the vision, culture and very face of institutions of higher learning from coast to coast. Pandemic or not, higher educational institutions need talent and these roles are now seen as paramount for them.

Harvard University, the oldest college in the U.S., recently turned to Isaacson, Miller to recruit Sherri Ann Charleston as the school’s chief diversity and inclusion officer. She starts her new role on Saturday. Partners Keight Tucker Kennedy and Ponneh Varho led the search along with senior associate Sonia Gomez.

“Sherri is an administrative leader and interdisciplinary scholar whose work at the intersection of history and law informs her efforts to translate theory into practice that improves higher education,” said Larry Bacow, president of Harvard. “She is widely admired for her ability to integrate all aspects of an institution into her strategic thinking and decision-making. I welcome Sherri’s leadership and expertise in this important area.”

A historian trained in U.S. history with a focus on race, women, gender, citizenship and the law, and an attorney with a specialization in constitutional and employment law, Ms. Charleston most recently served as assistant vice provost for diversity, equity and inclusion, and chief affirmative action officer at the University of Wisconsin-Madison. Ms. Charleston is the first person to hold the newly formed position of CDIO, following the completion of the work of the Presidential Task Force on Inclusion and Belonging.

“I look forward to working closely with Sherri and other members of my senior leadership team to drive and support our strategic plans for diversity, inclusion, and belonging across the university,” said Mr. Bacow. “She will need the advice and support of people throughout the university as she begins the important work of helping us become the kind of community we ought to be. The urgency of this moment must not be wasted.”

As Harvard’s new CDIO, Ms. Charleston will serve as a senior central administrator prioritizing and championing diversity and inclusion, working in collaboration with administration and faculty leadership across the university. She also will play a pivotal role in leading the ongoing implementation of the recommendations of the President’s Task Force on Inclusion and Belonging. She will report directly to Mr. Bacow, and will be a member of the Academic Council.

“I am thrilled to see the groundswell of work that already exists at Harvard, and I look forward to synthesizing and integrating the University’s many effective diversity and inclusion efforts into a visible, innovative strategy for enhancing diversity, equity, access, inclusion, and belonging across campus,” said Ms. Charleston.

“My approach to the work is very much grounded in my academic interests in history and the law, and in thinking about how we’ve evolved, and how we haven’t evolved, around questions of race and gender, and it comes from a deep passion toward effecting sustainable organizational change, and creating structures that outlast all of us, so that we can actually make progress,” she said. “I fundamentally believe that many of the challenges that we face in higher education relative to diversity, equity, inclusion and belonging have answers rooted in applied research. We must work together in the field to find them.”

Since its founding in 1636, Harvard has focused on excellence in teaching, learning and research, creating knowledge and developing global leaders across a breadth of disciplines. The university has 12 degree-granting schools in addition to the Radcliffe Institute for Advanced Study. The university enrolls over 20,000 degree-seeking candidates, including undergraduate, graduate and professional students, and counts more than 360,000 alumni around the world.

Witt/Kieffer Recruits First Chief Diversity Officer for Emory University
Witt/Kieffer has placed Carol E. Henderson as vice provost for diversity and inclusion, chief diversity officer and advisor to the president at Emory University. Consultants Oliver B. Tomlin and Jennifer G. Bauer led the search. “Carol Henderson is a widely recognized leader in promoting diversity, equity and inclusion in academia, and in communicating a deeper understanding of what it means to embrace these values,” said Emory University president Claire E. Sterk.

Ms. Varho is a member of the executive committee at Isaacson, Miller and the leader of the firm’s Washington, D.C. office. Since joining the firm in 2007, she has built a strong higher education practice, having completed more than 100 searches for presidents, provosts, deans, and a broad range of functional leaders. Her searches often result in strong client affinity relationships and she frequently works with her presidential placements to build out their leadership teams. Ms. Varho has conducted presidential searches for institutions including Bowdoin College, Spelman College, Vassar College, Wellesley College, and her alma mater, the University of Virginia. She has long been a champion of diversity and inclusion. In addition to her client work in this area, Ms. Varho co-chairs the firm’s diversity and inclusion initiative.

Ms. Gomez joined Isaacson, Miller this past April. Previously, she was a postdoctoral fellow at the Mahindra Humanities Center at Harvard University, where she researched and wrote on issues related to immigration in the U.S. and also served as part of the Andrew W. Mellon Foundation seminar on migration and the humanities. While earning her doctorate at the University of Chicago, Ms. Gomez worked on graduate diversity and equity initiatives in the office of the provost. In this role, she led organizing efforts in support of graduate students of color.

Related: Recruiting and Retaining Your Next Chief Diversity Officer