Menu
View our Events
Stay Connected:
The evidence is clear that diversity and inclusion is good for business on many levels. Still, CDOs lack the resources and support needed to implement meaningful change. Let’s examine the latest findings according to a new study by Russell Reynolds Associates. 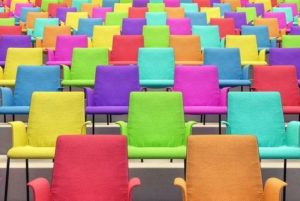 June 6, 2019 – Diversity, inclusion and equity have become headline issues, putting pressure on organizations and leaders to respond in a meaningful way. Investors are also expressing their displeasure with discrimination allegations. Russell Reynolds Associates’ review of 2017 and 2018 incidents involving bad executive behavior showed that companies experienced an average seven percent decline in market capitalization, or $4 billion, in the days and weeks following such news.

The upside associated with fostering diversity, inclusion and equity has also become more tangible. A recent McKinsey & Company study found that organizations with diverse boards and executive teams were up to 35 percent more likely to outperform their less-diverse competitors.

Russell Reynolds’ diversity and inclusion pulse survey, which included responses from more than 1,800 leaders around the world, confirmed that focusing on diversity has a positive effect on performance. In organizations in which diversity and inclusion is treated as a business priority, 75 percent of respondents said their employer set them up for their highest level of performance; that figure dropped to 43 percent for those working at organizations that take a reactive approach to D&I or consider it to be merely a compliance issue.

These are hardly new topics. Yet as a result of current social movements, many organizations are pouring fresh energy into them. At the same time, many are appointing new leaders to oversee D&I as an organizational-level business issue.

According to new Russell Reynolds Associates research, 47 percent of companies included on the S&P 500 index currently have a chief diversity officer or equivalent. Nearly two-thirds, 63 percent, of those CDOs have been appointed or promoted to their roles in the past three years.

Simply appointing a new CDO, however, is not enough. Russell Reynolds’ survey data, which included insights from 97 diversity leaders, revealed that many D&I initiatives are disconnected from business priorities, and that CDOs often lack the necessary resources or organizational support to make lasting changes.

Russell Reynolds’ took a data-driven approach in its efforts to analyze the CDO role and what makes it successful. The firm examined the career paths and competencies of today’s CDOs, based on the 234 CDOs currently at S&P 500 companies.

Anatomy of a Chief Diversity Officer

Recently, Russell Reynolds analyzed S&P 500 companies to understand how prevalent the CDO role is and the career paths that commonly lead to it. Data showed that 234 of these 500 companies have a CDO (or someone with an equivalent executive-level title) who is responsible for D&I. Of these 234 executives, about half have a joint title, often related to human resources or corporate social responsibility.

The search firm’s analysis revealed that CDOs come from a variety of career paths before taking their roles. “In our experience, no single profile is right for all companies, but rather, the best fit will depend on an organization’s goals and current stage in its D&I journey,” Russell Reynolds Associates said. 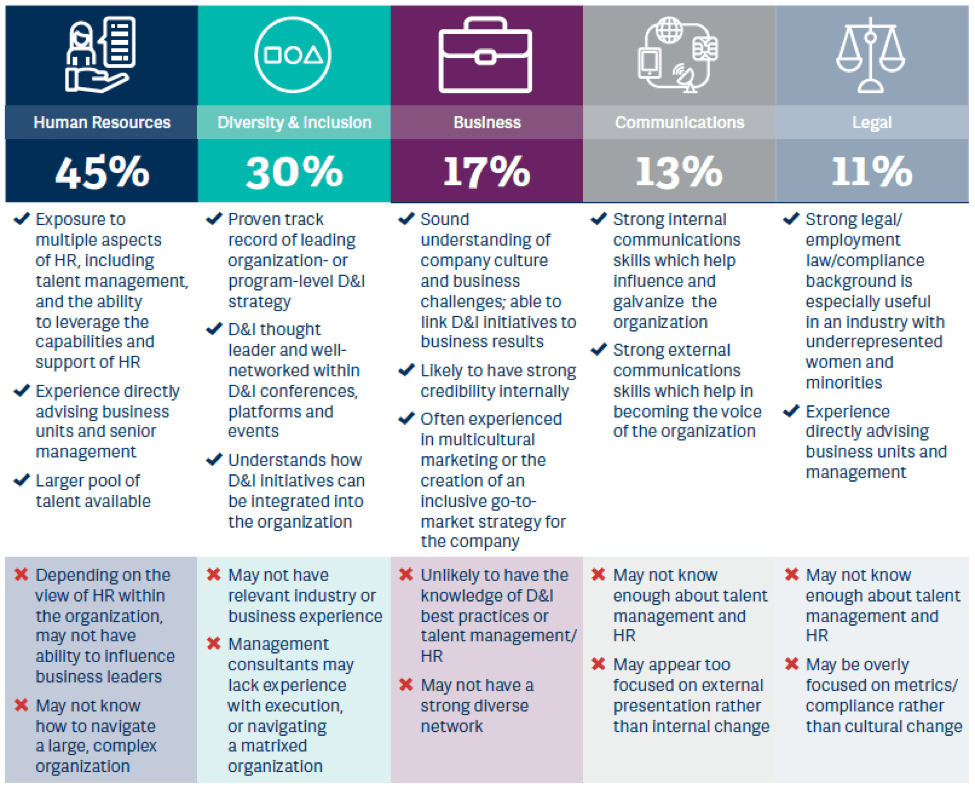 The majority of CDOs have D&I or HR experience, but a number of them have also held other roles:

Russell Reynolds found that CDOs who are successful have a common set of competencies that allow them to collaborate and influence across functions. Leading CDOs are ambidextrous leaders who can simultaneously play the following five roles: 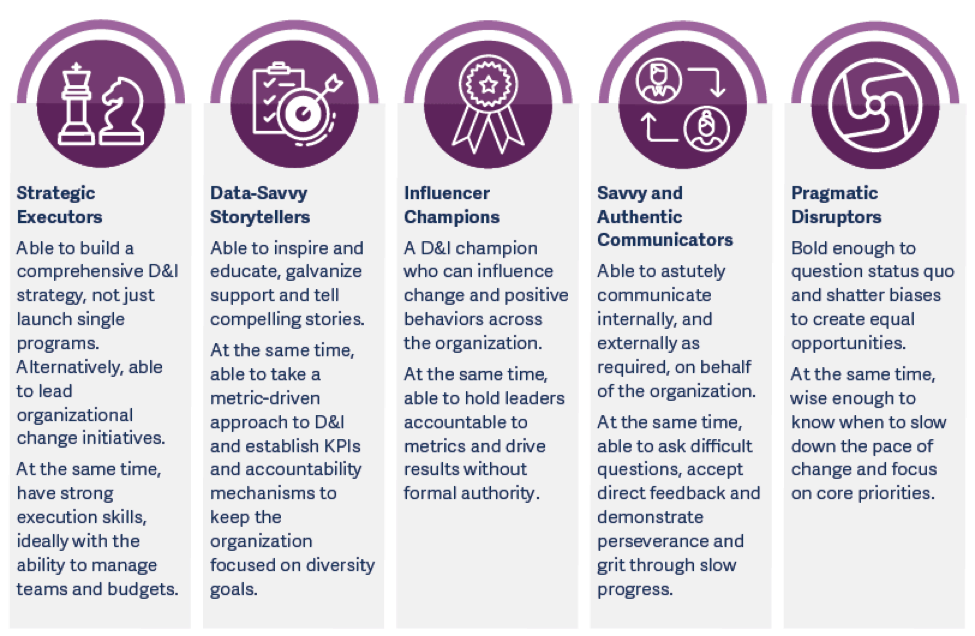 Russell Reynolds research showed that CDOs have the potential to significantly affect D&I success, particularly when they have the authority and skills to set D&I strategy. “However, too often, this potential is diminished due to poor executive fit or a lack of organizational support,” the firm said. “Without adequate commitment from the CEO and other top leaders, nearly any D&I strategy is destined to be viewed as a ‘nice-to-have’ option rather than a necessity.”

To learn more about how the CDO role is currently structured and what friction may exist between CDOs and the organizations they serve, Russell Reynolds surveyed 97 CDOs from its network. Data found that executives charged with leading D&I efforts are not well-equipped to spearhead the necessary organizational changes. They face three major pain points:

1. Structure and resourcing: CDOs have many responsibilities, yet more than half are not resourced to fulfill them

The CDO is an exceptionally multi-faceted role, with responsibilities ranging from organizational development to strategy-setting to legal concerns depending on the organization. Russell Reynolds Associates found that about half have additional roles unrelated to D&I which may hamper their ability to maximize results. “Historically, organizations may have selected influential business leaders to champion internal D&I strategy on top of their existing responsibilities,” the firm said. “Over time, however, it has become clear that D&I warrants its own resourcing, expertise and full-time leadership.”

Understanding the demographics of the workforce and their dynamics at different levels of the organization is a core component of a CDO’s role. Yet only 35 percent of CDOs said they have employee demographic data, leaving the majority without hard numbers to support their work. In some cases, this may be due to frequent turnover in the role or the lack of a consistent corporate D&I mandate that calls for regular data collection or analysis.

In addition, while the vast majority of CDOs said they measure engagement survey results, relatively few are relying on survey findings to drive D&I strategy. This may imply a lack of analytics expertise or resourcing, such as people analytics specialists.

Most business leaders will voice support for D&I initiatives – but their actions do not always follow. Among all leaders surveyed, D&I came in last on a list of eight potential business priorities. At the same time, CDOs believe that business strategy is one of the weakest drivers of D&I strategy. If executing D&I strategy does not also contribute to business goals, CDOs understandably face an uphill battle in convincing business leaders to fully engage.

For organizations: How to set your next chief diversity officer up for success. “Choosing executives who possess the right competencies for the role and the right experiences for the organization will go part of the way to making the CDO effective,” the Russell Reynolds report said. “However, the existing leadership team that is scoping and hiring for the role also has a part to play.” 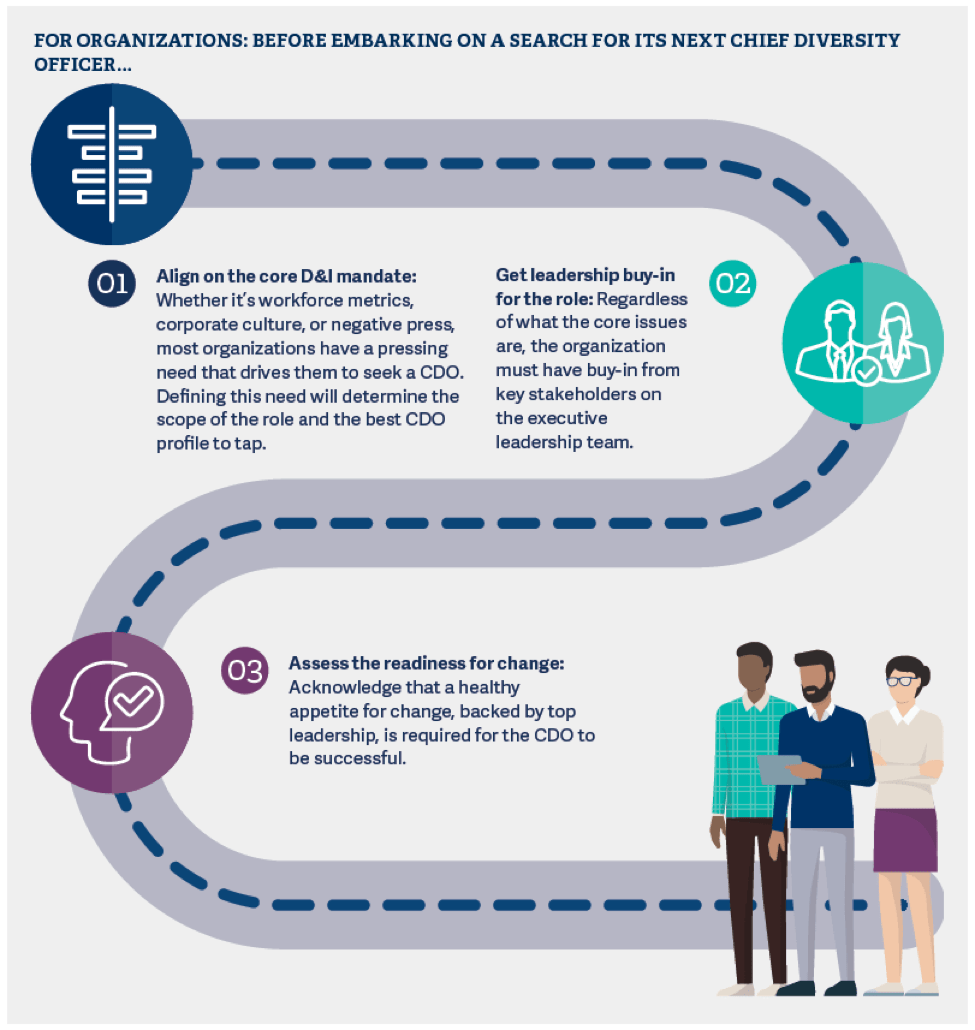 After appointing a chief diversity officer, organizational leaders continue to play a big part in the executive’s success or failure.

“The CDO can only be successful in driving a D&I mandate when executive leadership team members are aligned with that mandate and exhibit the inclusive leadership behaviors that show true commitment to D&I,” the Russell Reynolds report said. “It is also important for organizations to hold leaders accountable for fostering D&I initiatives in their respective spheres of influence. In the most successful cases, the CDO is galvanizing the leadership team around a shared change mandate that leads to defined outcomes.”

Check Out These Related Articles On Chief Diversity Officers: