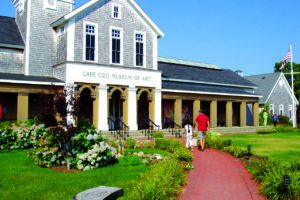 May 22, 2019 – New Hampshire-based executive search firm Gail Nessel Colglazier has helped to place two top leaders for the Cape Cod Museum of Art (CCMoA) in Dennis, MA. The non-profit reportedly started seeking a lone executive director 16 months ago, but in the end opted for two leaders.

“We’ve been engaged in a very thorough search process since last September and had many excellent candidates,” said Kathleen Fowler, president of the board of trustees. “Benton and Susan were unanimously identified as the most highly qualified and the right combination to guide the museum into a successful future. Their vision, experience and leadership will complement each other in their respective roles.”

“The CCMoA community is looking forward to working with and supporting Benton and Susan as they forge an expanded role for the museum’s future,” said Ms. Fowler.

After an unstable past, the 38-year-old museum is finally debt-free, according to the Cape Cod Times. For nearly a decade, the non-profit experienced deficits that once reached $300,000, the newspaper said. With its budget stabilized and a small endowment, the museum is now looking to boost attendance and is considering renovations.

“We’re now able to go year-to-year without worry, and we want to grow from there,” Ms. Fowler told the newspaper. “Hopefully, we can make an institution that people here on the Cape will fall in love with and can enjoy.”

Gail Nessel Colglazier partnered with the museum’s search committee in conducting the assignment. Ms. Fowler told the Cape Cod Times that the search took longer than expected and that some candidates backed away because of the museum’s past problems, the cost of living in the area, salary concerns and the expansive scope of the original job description.

Mr. Jones, the museum’s education director, has been serving as acting executive director since last fall. He will oversee programming, exhibits and education.

Ms. Johnson will handle day-to-day management, finances, staff and grant-writing. She joins the organization from Cape Cod Village, where she served as executive director and was previously a member of the board. Ms. Johnson has also been executive director of Harwich Ecumenical Council for the Homeless and executive officer of the Home Builders and Remodelers Association of Cape Cod. She is co-founder of Katelynn’s Closet, a non-profit organization that provides clothing and necessities to impoverished children.

“I extend a warm welcome to Susan,” said Mr. Jones. “Through our collaborative team leadership, I feel the CCMoA will dually benefit, providing the creative freedom necessary to be innovative with our exhibitions, broaden our educational offerings and sustain our community focused programs, while ensuring continued growth and forward-looking development that our, and every museum, needs.”

“I am thrilled to have this opportunity to work with artists and the creative community, as well as the dedicated staff and volunteers to help bring the CCMoA to its full potential,” said Ms. Johnson. “I am encouraged by the support of the board of trustees, as together we are committed to establishing deeper audience engagement, ensuring financial sustainability and preserving the distinctive artistic identity of the Cape.”

Founded by artists in 1981, the Cape Cod Museum of Art preserves and celebrates the distinctive artistic identity of Cape Cod, Nantucket and Martha’s Vineyard. CCMoA is a hub of cultural growth and creativity that educates, inspires and excites the imagination through its outstanding art collection and diverse programming. Located in a beautiful setting surrounded by a sculpture garden, the museum has seven galleries, a museum shop and film screening room. The museum is supported in part by the Massachusetts Cultural Council and the Arts Foundation of Cape Cod.