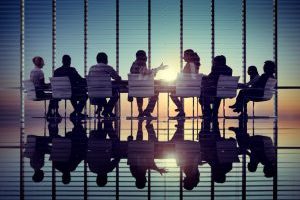 July 21, 2017 – For those who have been striving for women to achieve their fair share of seats on corporate boards, a recent Heidrick & Struggles report – ‘Board Diversity at an Impasse?’ – was no doubt disheartening.

In 2016, the report said, Fortune 500 companies filled 421 vacant or newly-created board seats with independent directors, a new high for the second year in a row. But the number of open seats occupied by women dropped to 117, down from 119 in 2015. The percentage of women appointed to boards, as a result, fell two points, to 27.8 percent, ending a streak of seven straight years of gains for women on boards.

“Boards have been aware of the research on gender and business performance for some time, as the uptick in the rate at which they were adding women in recent years suggests – only 18 percent of new director appointees in 2009 were women versus the figure of 29.8 percent in 2015,” said Heidrick. “But the deceleration in 2016 begs the question: Is this a plateau or dip that will last for some years to come – or merely a pause before the upward climb resumes?”

It is an open question, and one with no easy answer. “Either outcome is a possibility,” said Heidrick. “Those companies and industries that fall short in hiring and promoting senior female executives continue to face pressure; efforts to address the issue would expand the ranks of potential women directors. Our firm continues to receive an increasing number of requests for diverse candidates in board searches. And avenues for finding qualified diverse candidates are readily available.”

But other factors have stymied advancement, said Heidrick, and in many ways the issue has become a vicious circle. The pressure is on, for example, to restrict how many boards on which an active executive can serve. With fewer female executives in the senior ranks that means fewer women can be considered for board roles.

Meanwhile, the growing demand for CEO experience as a requirement for a board seat leaves many women out in the cold. Simply put, too few women hold chief executive jobs. And because few women serve on boards, even fewer will be available for directorship positions with firms that require prospective candidates to have board experience. Did someone say, “Catch 22”?

Because of the rate that women were progressing, Heidrick predicted three years ago that they would reach 50 percent of the new director roles in 2024. A year later, the firm figured it would take two years more than that. “Now, given the decline in the growth rate in 2016, parity will not arrive until 2032,” said the new report.

“Another challenge is that is takes time for women to gain experience in companies and to climb the ladder in order to be ready for the board level. This should phase out in time,” she said.

Limitations for board memberships must be addressed, Ms. Vercruysse said. Yet it is more than just a women’s issue. “One could argue that these restrictions should be loosened, not only to attract more women but also because currently there is a tendency to attract younger people to the board in order to be able to cope with disruptive technology and digitalization, which are not always the core competencies of the average experienced board member,” she said. “Very often, these younger people do not necessarily have CEO experience.”

Further, greater efforts must go into getting women into CEO roles, which broadens their presence in the daily workings of companies, and society. “We have to make sure more women are growing to the top and get CEO-positions because parity is not only necessary on board levels but also on CEO-level and other levels in a company,” Ms. Vercruysse said.

Women in leadership roles is a vital issue, she added. After all, women represent half of the world’s talent. Their participation is important not only from a fairness standpoint, but from an economic viewpoint as well, particularly as the war for talent rages on.

Belgium, she pointed out, has quotas for women on boards, which has accelerated the professionalism of the boards and boosted the presence of women as well. “Although I personally am not a big fan of quotas, they can certainly help,” she said. “In Belgium, we have experienced a professionalization of the recruitment for board positions since quotas have been in installed, together with a heightened awareness, which has been beneficial to boards and to women.”

Ms. Vercruysse, who advocates for more women mentors and role models for younger female candidates, remains optimistic that parity can eventually be achieved. “Due to current campaigns raising awareness on gender diversity in general, more women flow through to leadership and executive roles and from there they can build up experience to serve on boards later,” she said. “Men and society at large are also more and more aware of the fact that women are a very important assets in good governance of companies.”

Larry Shoemaker, president of Cornerstone International Group, which is based in Atlanta, explained that finding women for boards is an important niche for his firm. Cornerstone surveyed the issue of women on boards a year ago, as part of a broader study on women leaders in business, Mr. Shoemaker said. It involved a more general and diverse group that covered 22 countries, but its results in many ways mirrored those of the Heidrick study.

Women Not Having Career Conversations On Advancement
Women are underrepresented in industries that anticipate the greatest growth in jobs — engineering, technology, architecture and mathematics. But they are overrepresented in office and administration positions, sectors most threatened by digitization, automation and robotics.

The Cornerstone survey also echoed a study by Grant Thornton, Mr. Shoemaker said, in concluding that the increase in senior roles held by women had stalled. After reaching 19 percent of the seats held in 2004, he said, the number of women directors was but 22 percent a decade later.

“Although many respondents acclaimed the concept of women leaders, it seems few firms have rolled up their sleeves to make it happen,” said Mr. Shoemaker. “Only 17 percent have a formal policy to recruit women. Only 34 percent have gender diversity in their values statement. And only 21 percent regard gender diversity as a corporate priority.”

“We concluded from this that the slowdown in the rate of women attaining senior positions came down to a lack of conviction regarding the merits on the part of today`s predominantly male leadership.”

The challenges that women face in getting onto boards are varied, and tough to crack. Among other issues, the executive positions that women hold tend to draw little attention. “Many of the roles women are in do not receive high visibility, which makes it difficult for them to be recognized for the skills they have which will translate to board contributions,” said Mr. Shoemaker.

When it comes to the restrictions that keep women from winning directorships, Mr. Shoemaker said part of the answer is not to limit the requirements for board roles but to open them up even further. “The immediate solution would be to expand the requirements to recognize other types and levels of experience that are beneficial to the board,” he said. “CEO experience would seem an unnecessarily limited requirement.”

“Diversity provides different thinking, and a broader approach to opportunities and issues. Boards that acknowledge this will focus on building a diverse board, over time, by defining specific requirements in their selection process, and have as high expectations as their organization does for filling key operating roles. The decision-making rationale of women has been singled out as superior to that of men in many instances.”

All the same, Mr. Shoemaker remains guardedly hopeful that the image of boards of directors will one day change from a collection of predominately white males to a more inclusive, representative picture. “Our June, 2016 annual survey suggested a general indifference, or a lack of organizational commitment, with only 21 percent of respondents viewing gender diversity as a corporate priority, and 45 percent feeling it was incidental to business performance,” he said. “I am optimistic about more women reaching boards, but not in quickly seeing dramatic increases based upon the type of thinking indicated in our 2016 survey.”

Viviane Doguet, a partner with EMA Partners Belgium, said one must delve deep into the statistics before coming to any firm conclusions. “I am not so pessimistic,” she said. “The number of seats that went to women in 2016 in the Fortune 500 decreased, but we must also look at mid-cap companies as well.”

Out of the Box

Greater flexibility of mind is needed, she said for male positions as well as women. “We need to be open to a diversity of career paths,” she said. “It will increase the pool of women available and contribute to a better balance of perspective and will allow for more thinking out of the box.”

The search for board members should be delegated to professionals with access to larger networks, Ms. Doguet said. “To get the benefit of women on boards, we need at least three women per board,” she said. “Otherwise, their voices will not be heard and the board will not perceive the benefits of having women.”