Menu
View our Events
Stay Connected:
U.S. businesses report strong hiring intentions, according to the latest ‘Employment Outlook Survey’ by ManpowerGroup. Let's go inside the latest forecast and see which sectors and regions are in growth mode. Shelli Herman, president and founder of Shelli Herman and Associates, then weighs in. 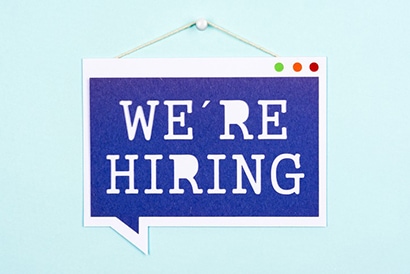 September 11, 2018 – U.S. employers are expecting hiring to pick up in the fourth quarter, with 22 percent of employers planning to add staff, according to the latest “Employment Outlook Survey,” released today by ManpowerGroup. Employers in all U.S. regions and industry sectors are looking for headcount to grow.

The upbeat forecast indicates that the uncertain political climate continues to have little effect on employer confidence. Of the more than 11,500 U.S. employers surveyed, 71 percent said they expected to maintain their headcounts, with just five percent forecasting workforce reductions.

Taking seasonal variations into account, the net employment outlook for the fourth quarter was up 18 percent. This marked the 16th consecutive quarter with an outlook of plus-15 percent or stronger. Nationwide, hiring prospects were one percentage point stronger when compared with the same period last year.

Employers in all 13 national industry sectors said they expected to grow staffing levels during the fourth quarter:

Nationwide, employers in four industry sectors reported slightly stronger hiring prospects in comparison with the third quarter of 2018, making hiring plans for three of those sectors the strongest reported in 10 years for the mining, government and professional & business services sectors. Transportation & utilities sector employers also reported a slightly stronger outlook in comparison with the previous quarter.

Employers in all four regions in the U.S. showed a positive outlook for the coming quarter. Workforce gains were expected by 20 percent of Midwest businesses surveyed, with five percent of employers expecting a decrease in staffing levels and 74 percent anticipating no change. Government sector employers in the Midwest reported moderately stronger hiring prospects for the fourth quarter, when compared with the previous quarter. Hiring intentions improved slightly in five sectors: construction, education & health services, durable goods manufacturing, other services and professional & business services.

In the South, 23 percent of businesses surveyed said they anticipate an increase in staffing levels during the final quarter of 2018, with four percent expecting a decline in payrolls and 71 percent expecting no change. Hiring plans improved slightly in financial activities, government, leisure & hospitality, nondurable goods manufacturing and professional & business services.

Employers in 23 percent of the businesses surveyed in the West anticipated an increase in payrolls for the October-December timeframe. Five percent of employers surveyed expected to trim payrolls and 70 percent anticipated no change. Leisure & hospitality sector employers in the West reported a moderate improvement in hiring prospects compared with the previous quarter, and outlooks were slightly stronger in construction, education & health, information and other services. 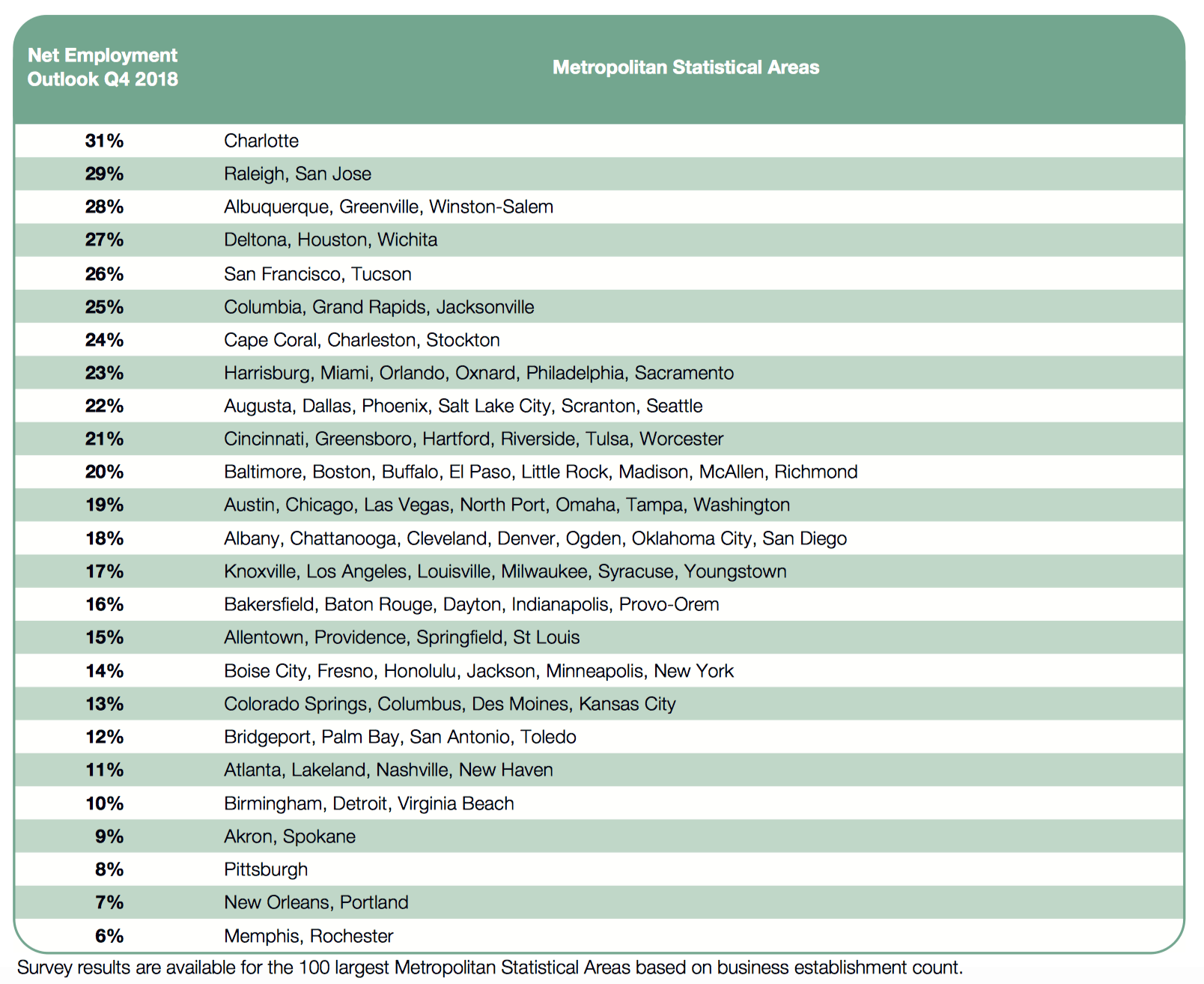 ManpowerGroup interviewed over 59,000 employers across 44 countries and territories to forecast labor market activity in the fourth quarter. All participants were asked, “How do you anticipate total employment at your location to change in the three months to the end of December 2018 as compared to the current quarter?”

ManpowerGroup’s fourth quarter research revealed that some job gains were expected in 43 of 44 countries and territories during the October-December timeframe. There is little evidence, however, of notable surges in hiring activity. Overall employer confidence was little changed from prior quarters and most employers remained resilient, appearing content to engage in modest levels of hiring activity against a backdrop of challenges associated with a realignment of global trading partners and ongoing tariff negotiations.

Fourth quarter hiring confidence was strongest in Japan, Taiwan, the U.S., Romania and Slovenia, while the weakest hiring prospects were reported in Switzerland, Argentina, France and Italy. Across the Europe, Middle East & Africa (EMEA) region, workforce gains were expected in 25 of 26 countries. Hiring plans improved in 11 countries quarter-over-quarter but weakened in nine. In a year-over-year comparison, job gains were expected to improve in 13 countries and decline in seven. Employers in Romania and Slovenia reported the most optimistic hiring intentions. Conversely, Swiss employers reported the weakest hiring plans, as well as the only negative forecast among the 44 participating countries and territories.

Hiring Looks Strong Heading Into Second Half of 2018
As employers grapple with a highly competitive hiring environment that is causing prolonged job vacancies across the U.S., workers will reap the benefits. According to CareerBuilder‘s ‘Midyear Job Forecast,’ a full 63 percent of employers plan to hire in the second half of 2018, up from 60 percent last year.

Employers in each of 10 participating countries in the Americas region also expected varying levels of workforce gains. Outlooks improved in eight countries and declined in only two in a quarter-over-quarter comparison. Year-over-year, hiring prospects were stronger in six countries and declined in three. Employers in the U.S., Canada and Mexico reported the region’s most optimistic fourth quarter hiring plans, while employers in Argentina and Panama expected the weakest job growth.

“The current economy remains robust and will continue to support job growth at all levels,” said Shelli Herman, president and founder of Shelli Herman and Associates. “This growth has an immediate impact on employers, who are increasingly finding it difficult to differentiate themselves in a flooded market. With so many more job openings than there are qualified candidates, it is a job seeker’s market.”

Candidates today are in a unique position, according to recruiters: It is common for a candidate to have many offers available as they decide their next career step. “In addition, the stigma associated with accepting a counteroffer from a current employer has lessened and candidates now seriously consider counteroffers that are compelling and create more opportunity for them in their current roles,” said Ms. Herman. “This makes the work of an executive recruiter even more challenging than ever before.”

Ms. Herman said it is imperative that employers understand how they can distinguish themselves to attract the best leaders. “The partnership and guidance provided by an executive search consultant has never been more beneficial because these same search partners can provide data around comparable compensation and market trends in an employer’s sector, while helping the employer show the unique potential and opportunity a role offers,” she said. “A market that favors the candidate can complicate searches, but it also gives qualified search consultants the opportunity to really provide the inimitable skills that make them valuable to their clients.”