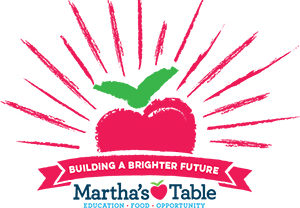 More than 200 candidates were considered for the position. Ms. Ford, who recently worked at the U.S. Department of Education, brings an extensive background in education leadership and community development, coupled with a track record of achieving proven, quantifiable results.

“We could not have asked for a stronger leader than Kim R. Ford to serve as our next CEO,” said Ellis Carr, board chair of Martha’s Table and CEO of Capital Impact Partners. “Her fierce commitment to advancing equity in the District of Columbia will be a guiding compass in our work to support strong children, strong families and strong communities in D.C.”

At the U.S. Department of Education, Ms. Ford served as acting assistant secretary in the office of career, technical and adult education, where she led the management of nearly $2 billion in workforce development programs. Prior to this role, she was with the University of the District of Columbia, overseeing programs related to career and technical education and continuing education as dean of the Workforce Development and Lifelong Learning Division. She also served in the Obama’s administration, where she helped lead the implementation of the American Recovery and Reinvestment Act, distributing more than $350 billion in recovery funds to spur economic growth.

“I am personally thrilled to have Kim join us as the next leader of Martha’s Table,” said Cheryl Holcomb-McCoy, Martha’s Table board member and dean of the School of Education at American University. “Her impressive background in education and focus on lifelong learning will elevate our mission to ensure all children in D.C. have the opportunity for their brightest future.”

“I am honored to join Martha’s Table and be a part of its long history of partnering with D.C. residents,” said Ms. Ford. “My mother was a lifelong public servant who instilled in me a passion for serving my community. And as a native Washingtonian, nothing is more important to me than seeing children and families in our city thrive.”

Martha’s Table, which started in 1980, works to support children, families and communities by increasing access to quality education programs, healthy food and family supports. In 2017, the organization served upwards of 1.95 million meals to D.C. residents and provided high-quality, nationally accredited early childhood education and out-of-school time programs for young children. The non-profit’s budget last year was just over $12 million, with a staff of 110 full- and part-time employees. It has a leadership team of more than 20 individuals, but with just four executive direct reports to the CEO: chief administrative officer, chief program officer, director of development and director of strategic communications (currently open).

Headquartered in Philadelphia, Diversified Search is the largest U.S. female owned and founded firm in the executive recruitment industry. It has offices in Atlanta, Chicago, Cleveland, Los Angeles, Miami, New York, San Francisco and Washington, D.C. Diversified is the U.S. partner of AltoPartners, an international alliance of 58 independent executive search firms that spans 35 countries across the Americas, Europe, the Middle East, Africa and Asia Pacific.

Based in Diversified Search’s Atlanta office, Ms. Biggins brings more than 15 years of search experience to the firm, including several years working in the White House. She has served as assistant to the president of the U.S. and director of presidential personnel under Bill Clinton, a role that involved selecting and hiring all political appointees within the federal government. She worked directly with the president on appointments at all levels of the administration, including the placement of agency heads, ambassadors and members of presidential boards and commissions.

Mr. León is located in Diversified’s Washington, D.C. office and specializes in board, CFO and non-profit searches. Prior to joining the firm in 2015, was senior director of corporate relations and programs for the Hispanic Association on Corporate Responsibility.

Ms. Sommer works in the New York office of Diversified Search, where she supports the digital, media, entertainment, and sports; and technology and innovation practices. Prior to joining the firm, she was senior vice president of search management at Carlsen Resources, where she was responsible for overseeing the search process.