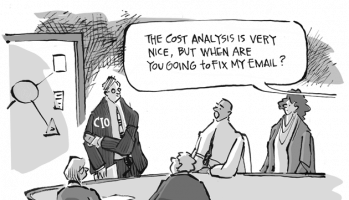 February 11, 2016 – CIO hiring and recruiting for information technology teams is on the rise. Nearly a quarter (22 percent) of U.S. CIOs plan to expand their IT teams, according to a 2015 Robert Half Technology ‘IT Hiring Forecast Trend Report.’ It represents a three-point rise from the beginning of 2015 and an eight percentage point jump from one year ago.

According to the report, 67 percent of CIOs intend to hire only for open IT roles, while just nine percent expect putting hiring plans on hold. Only two percent of CIOs polled expect to reduce their staffs.

The survey found that recruiting within the function remains challenging: 59 percent of CIOs said that it is ‘somewhat’ or ‘very challenging’ to find skilled IT professionals, while 69 percent of respondents said they are taking action to address recruiting challenges for IT staff.

“The CIO is quickly becoming one of the most strategic roles within any organization,” said Mike Doonan, a recruiting partner with search firm SPMB. Ignore people who think chief digital officers are rendering CIOs obsolete, he said.

Mr. Doonan specializes in C- and VP-level executive searches for publicly traded, private equity and venture backed companies in technology, healthcare and business / consumer services. He is known for recruiting the top CIO and senior IT leaders to companies in the middle of massive transformations, including Comcast, CDW, Telestra, and Informatica, among others.

A great CIO “has the power to dramatically differentiate a company’s offering in the market,” he said, while a poorly performing one “can be the single point of failure within an organization and, at best, the anchor dragging a company into obscurity.”

The recent hiring of a high-end CIO who has a history of making a dramatic difference was just conducted by executive search firm and talent consultancy Acertitude. The firm recruited Pete J. Caputo as chief information officer for Rise Broadband in Englewood, CO.

In his new role, Mr. Caputo will lead Rise’s IT function, with responsibility for providing technological infrastructure to the company’s service offering, as well as strategic guidance to drive organizational growth through IT innovation and improved efficiencies.

Mr. Caputo brings two decades of telecom experience, with a track record of steady growth in his roles and responsibilities for some of the leading names in the industry. Most recently, he was vice president for IT with Level 3 Communications, having previously served as vice president of technology strategy and senior director of technology for tw telecom, before its acquisition by Level 3. Early in his career, he held roles with Convergent Communications and US West.

“Pete brings exactly the mix of leadership skills we rely on to make us the first choice in the marketplace. He has real, proven expertise in his chosen field of information technology. But he adds to that a blend of management skills and a capacity for strategic thinking,” said David Heimbach, Rise Broadband’s chief operating officer. “That is the combination we seek in our senior management team, and Pete will fit in perfectly.”

“Rise is growing aggressively because they work every day to find new and better ways to serve their customers. They value collaboration, and have a passion for achieving aggressive goals,” said Rick DeRose, founder and managing partner of Acertitude. “Pete brings the same spirit, and I predict he will step in quickly and become a valuable member of their management team.”

Since its launch in June, Acertitude has conducted a number of C-level placements, including a chief accounting officer for Brightstar Corp. and a chief operating officer for Rise Broadband.

Check Out These Related Articles On CIO Searches: