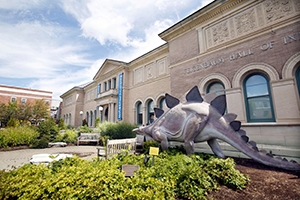 Mr. Rodgers was the unanimous selection after a rigorous four-month search led by the museum’s board of trustees. Berkshire Museum staff and Berkshire community members participated in the search process. David Ellis, who has served as interim executive director, will work with Mr. Rodgers through a transition period.

Mr. Rodgers will start his new role on April 1. He brings more than 20 years of museum experience to the Berkshire Museum. He currently serves as provost and chief operating officer of the South Florida Museum in Bradenton, FL.

“Jeff brings a track record of innovative leadership and creative thinking that will, true to our unchanging mission, take the museum into a secure and successful future,” said Elizabeth McGraw, president of the board of trustees. “Jeff shares our commitment to finding new and meaningful ways to connect art, science and history for people of all ages across our community and this region. We are grateful to David Ellis for his leadership and wise counsel in this important time.”

Mr. Rodgers has served in a number of roles at the South Florida Museum. Since 2016, as provost and COO, he has held broad leadership responsibilities for strategic planning, creating innovative programming, fundraising and outreach across the community to build and sustain crucial partnerships and collaborations. A former teacher, Mr. Rodgers also served in a variety of roles at the American Museum of Natural History in New York, including as director of the moveable museum program.

“Non-profits are a vital sector for our region and nonprofit leadership matters,” said Peter Taylor, president of the Berkshire Taconic Community Foundation. “Jeff is a highly skilled museum executive who is committed to increasing the Berkshire Museum’s engagement with the community, expanding its important educational role and guiding it into the future.”

In 1903, Berkshire Museum founder Zenas Crane, inspired by institutions like the American Museum for Natural Science, the Smithsonian and the Metropolitan Museum of Art, decided to blend the best attributes of these establishments in a new museum for the people of western Massachusetts.

Brent D. Glass, led by Brent Glass, provides management consulting to museums, historic sites and other cultural organizations, working with more than 60 cultural, historical and educational organizations around the world. Dr. Glass is director emeritus of the Smithsonian’s National Museum of American History, which he led for nearly a decade. He is an author, television presence and international speaker on cultural diplomacy and museum management.

Museums are increasingly turning to specialist recruiters to help fill critical, senior level leadership roles. And as these top positions become more sophisticated and complex, the hunt is on for top flight talent to fill these critically important roles. With that, search fees across the space are rising substantially, according to recruiters.

Here’s a look at a few recent assignments taken from the Hunt Scanlon Media archives:

Noetic Search recruited Crystal Bowyer as the president and CEO of The National Children’s Museum. Rhyan Zweifler, president of the Chicago recruitment firm, led the assignment. Founded as the Capital Children’s Museum in 1974, the museum served children and families for 30 years in Northeast Washington, D.C.

Check Out These Relates Articles On Searches For Museums: