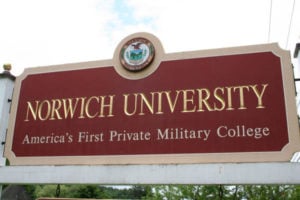 March 9, 2020 – Education-focused executive recruiter Academic Search has recruited Col. Mark Anarumo as the new president of Norwich University in Northfield, VT. After more than 28 years of service, Richard W. Schneider is stepping down from the role in June. Andrea Warren Hamos and Maya Ranchod Kirkhope led the assignment.

“The board of trustees is very excited to name Col. Anarumo as our next president,” said Alan DeForest, chairman of the board of trustees. “He has demonstrated throughout his distinguished academic career and military service the type of strong, effective and enlightened leadership which will ensure that Norwich University has a worthy successor to president Schneider. We are confident that we have selected an exceptional individual whose intellect, vision and values will inspire our university to reach even greater levels of excellence in its third century of service to America.”

Col. Anarumo comes to Norwich from the U.S. Air Force Academy in Colorado Springs, CO, where he served as director and permanent professor for the center for character and leadership development. His previous assignment was vice commander of the 39th Air Base Wing at Incirlik Air Base, Turkey, where he was responsible for about 5,000 U.S. military, civilian and contractor personnel and the combat readiness of U.S. Air Force units at Incirlik and four geographically separated units in Turkey. He entered the Air Force in 1994 as the distinguished graduate of Air Force Reserve Officers’ Training Corps at Rutgers University.

In his new role, Col. Anarumo will maintain and enhance Norwich University’s presence and educational relevance in a rapidly-changing higher education environment in New England and nationally. Maintaining the distinctiveness of the hybrid military model, he will be charged with fostering the development of new market opportunities and new programs that will differentiate and distinguish Norwich from other universities and military institutions, said Academic Search.

“Norwich University offers traditional students and adult learners a wealth of opportunities in a prestigious, supportive, and yet demanding academic environment. I am honored that I have been selected as its 24th president,” Col. Anarumo said. “With Norwich’s distinguished history, strength and bright future, my family and I look forward to being part of the campus community. The depth of devotion of the faculty, staff, alumni, supporters, students and board of trustees inspires us. I look forward to our collaborative leadership for the future of this inspiring, globally positioned university for the 21st century.”

Academic Search is well-versed in Norwich University’s mission, vision, guiding values and strategic priorities, having recruited Dr. Schneider and more recently, the provost and dean of the faculty, Sandra Affenito.

Norwich University is the oldest senior military college in the country. With 2,400 students on campus and another 1,600 enrolled online, the school offers a learning environment that combines the discipline and resilience of a military education with a challenging liberal arts and professional education. It offers 50 fields of study. Norwich is celebrating the bicentennial of its founding this year.

For over three decades, Academic Search has been a leader in designing and implementing search processes for leaders of colleges and universities across the country. The firm has completed hundreds of executive searches for higher education institutions and related organizations, for roles ranging from presidents to provosts to deans. Academic Search is currently conducting, or has completed, senior assignments for Walsh University, University of Pittsburgh at Greensburg, University of Central Missouri, Fort Hays State University and SUNY Empire State College, among others. The firm is headquartered in Washington, D.C.

Dr. Warren Hamos is vice president for consulting operations and senior consultant at Academic Search. Prior to her appointment, she served for five years as associate director, and subsequently interim director, of the American Council on Education’s (ACE) Emerging Leaders Group and the ACE Fellows Program.

Ms. Ranchod Kirkhope has worked in higher education for the past 20 years and specifically with presidents and governing boards for the past 10 years. She has extensive knowledge of the culture of public and private higher education, academic governance, and good board management and practices at colleges and universities. Since joining Academic Search, Ms. Kirkhope has conducted dozens of searches for public, private and international institutions, from dean to president.