Menu
View our Events
Stay Connected:
They have known the digital world since birth, and now they are entering the workforce. Kevin Sheridan, a renowned talent consultant, provides 11 traits you should know about this digital native generation, along with insights from expert recruiters from Bridge Partners and Executives Unlimited. 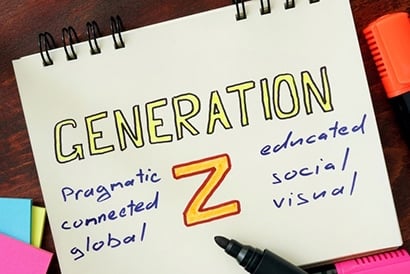 November 16, 2018 – Generation Z. It is the first generation to know only a digital world. Its members grew up playing on their parents’ mobile devices, and many had their own smartphone as early as elementary school. Now that they’re on the brink of entering the job market, older workers are wondering how these ‘digital natives’ will impact the workforce.

There are many other monikers given to this generation, including Digital Natives, Globals, Post-Millennials, Millennials-On-Steroids, iGeneration, Plurals, the Homeland Generation, Centennials, and Delta Generation, or Deltas. That the generation has such an array of names in many ways illustrates the general lack of understanding about them, says a new report by talent consultant Kevin Sheridan.

Mr. Sheridan is an internationally-recognized keynote speaker, a New York Times bestselling author and a sought-after voice on the subject of employee engagement. Having spent 30 years as a human capital management consultant, he has helped some of the world’s largest corporations rebuild cultures that foster productive engagement, earning him several distinctive awards and honors.

The rough consensus on what years Generation Z members were born is from 1995 to 2014. They are the children of Generation X. Native-born American members of Generation Z number roughly 60 million, just outnumbering their endlessly dissected Millennial elders by one million, according to Susan Weber-Stoger, a demographer at Queens College.

“As the first surge of Generation Z enters the workplace, organizations may be surprised at how different they are from Millennials,” said Mr. Sheridan. “Organizations, human resource leaders and managers will need to learn about, and fully understand, this unique generation especially since they may be the solution to the never-ending talent attraction and talent retention challenge. Thus, employers will need to also adapt and bring a whole new way of working to the workplace to win over Gen Z.”

So what makes Gen Z different, and what specifically must companies do differently to attract and retain them? Mr. Sheridan lays out 11 traits to know about Gen Z as they come of age.

1. They have an even greater desire for the most up-to-date technology than Millennials.

“They have strong preferences for immediate access to information and want their employee experience to fully integrate with, and match, their customer experience,” said Mr. Sheridan.

2. They care more about money than the last generation.

“Having lived through the Great Recession of 2008, they value financial security more than other generations,” Mr. Sheridan said. “Having seen their parents laid off during the recession, this left a lasting impression on Generation Z.”

The Impact of Failing to Focus on Recruiting Upcoming Generations of Leaders
Business leaders are concerned about their ability to attract and retain Millennials and Gen Z workers, and the impact of failing to do so, according to a report from Allegis Group.

3. They are far more loyal than Millennials and do not plan to “job-hop” like Millennials did.

“Again, Gen Z’s sensitivity to financial and job security will make them appreciate their job, pay, and employer, far more than Millennials did,” said Mr. Sheridan. This loyalty transcends into their church attendance: Forty-one percent of Gen Z attended church during their young adulthood, compared to 18 percent for Millennials at the same ages, 21 percent of Generation X, and 26 percent for Baby Boomers, according to a U.S. Department of Labor study

4. They are far more socially conscious than their older brethren.

In fact, 82 percent of Gen Zs consider corporate social responsibility (CSR) a major factor in deciding where to work, according to a report by Workforce.com. In addition, the report found that 66 percent of this generation would take a pay cut to work at a more socially responsible company. “In fact, it is not unheard of for Digital Natives to walk out of a job interview if they see the company still uses plastic water bottles and straws, most of which wind up in a landfill,” said Mr. Sheridan.

5. They yearn for career development and a job that provides meaning and purpose.

While Gen Zs value money more than Millennials, they also value learning and career development. Eighty-one percent of Gen Z believe that a college degree is necessary to obtain one’s career goals, according to a Northeastern University study. Furthermore, Gen Zs are far more prepared to focus on their careers at a young age than Millennials have been: A 2016 Annie E. Casey Foundation study revealed that Gen Z had 40 percent lower rates of teenage pregnancy, 38 percent lower drug and alcohol abuse and 28 percent higher graduation rate from high school, than Millennials.

Gen Zs care much more about prices and getting deals than Millennials, mostly because they came of age during the recession of 2008. Sixty-seven percent of Gen Zs said they would go to a website to obtain a coupon for a deal, whereas only 46 percent of Millennials would do the same, according to a report by the Huffington Post. “A large part of this price sensitivity gap is explained by the fact that Millennials were the sons and daughters of the richest generation in American history, while Gen Zs watched their parents get laid off, lose stock and real estate value, and suffer overall economic hardship,” said Mr. Sheridan.

7. They very much like when social media is used to attract, recruit and interview them.

“Specifically, Gen Z would love to see both digital and virtual reality instruments used throughout the recruiting process,” Mr. Sheridan said. “Companies will find the need to alter their recruiting from in-person interviewing to online messaging and platforms that are tailored to this generation. This includes texts, Snapchat, Facebook, Instagram, and YouTube so they can use their phones.”

Gen Zs live in a world of continuous update and information downloads. “In addition, Gen Z processes these updates and information faster than other generations, largely due to apps like Snapchat, Instagram, and Vine,” Mr. Sheridan said. “Thus, organizations need to deliberately channel and challenge them to the task at hand.”

Mr. Sheridan noted that although Gen Z can be less focused than their Millennials counterparts, they are highly individual and self-starters, creating work on their computer, while doing related work or research on their phone or tablet, at the same time making notes on a notepad, and then completing the work on their tablet while FaceTiming a friend. “With many consistent and continual distractions, they are very efficient at handling work and play, often at the same time,” he said. “Now that is multi-tasking! Employers should consider how this trait could redesign how work is performed in their organization and its effect on culture.”

10. Gen Z is much more diverse than former generations.

The U.S. Census Bureau says that almost half of Gen Z identify themselves as non-Caucasian. “Thus, companies will need to fortify and re-examine their messaging and commitment to diversity & inclusion,” Mr. Sheridan said. “If they don’t, they will never be able to attract, engage and retain Gen Z workers.”

As more of the world comes online, Gen Z members have and will become more global in their thinking. In fact, 58 percent of adults worldwide above the age of 35 believe that Gen Zs have more in common with their global peers than adults in their own country, according to the Huffington Post. “Smart and forward-thinking organizations will adapt and find new ways to attract, engage and retain this wonderful new generation of workers and reap the myriad benefits of doing so, not the least of which is higher profitability,” concluded Mr. Sheridan.

Tory Clarke, co-founder and partner at Bridge Partners, said much remains unknown about the challenges that this generation will face in the workplace: “I think one of the things we can be certain of regarding Generation Z is that we currently have very little sense of the professional world many of them they will enter and therefore very little sense of the skills they will need and desires/preferences they will have when it comes to their professional choices,” she said. “Their age ranges from four to 23 years old – that is a huge differential and I suspect that, at either end of that spectrum, working life will be very, very different.”

This is also a generation with unique skills and insights into technology and how to use it. “For many of us, Generation Z are our children and we see every day what it looks like to be a true digital native – not just in nomenclature but in reality – they have never known life without sophisticated handheld electronics and information at their fingertips 24-7,” Ms. Clarke said. “They are data and tech savvy. They have grown up acknowledging media bias and understanding stealth advertising in a way that we never did. They learn to code alongside the traditional second language. For many (although not all), diversity and inclusion does not mean fitting into one or more defined characteristics – many of them are many things to many people — and their self-definitions are more fluid than those of prior generations.”

Potential employers would be wise to be transparent with these up-and-comers. “Generation Z has grown up speaking up, and they will expect the space to continue to do so; they will seek authenticity – these are smart young people and paying lip service will not cut it when it comes to employer branding, culture, recruitment and retention,” Ms. Clarke said.

Gen Z were raised differently from Millennials, said Tomilee Tilley Gill, founder and president of search firm Executives Unlimited. “They have never known a world without technology,” she said. “Gen Z appears to be more realistic, which may be due to the never ending amount of information they are receiving from social media and their favorite apps.”

Related: How Generation Z Will Impact the Future Workforce

Clearly, this generation has been exposed to more cynicism, anger and media, and it that has helped shape them. “They are flooded with information globally and updated by the minute,” said Ms. Tilley Gill. “Gen Z is participating as online consumers. They are planning their families’ vacations, purchasing groceries and clothing, and using debit cards at an early age. This generation is far more mature and getting real-life experience on a daily basis.”

“We don’t know about Gen Z’s work ethic yet, but what we do know is that they will be the most educated and globally aware generation entering the workforce,” Ms. Tilley Gill said. “They will be utilizing the most current technology to do their job. I see Gen Z as being willing to work. We have already seen an onset of amazingly talented entrepreneurial teenagers creating companies at the age of 13!”

“The whole complex of our world is going to change so rapidly over the next 10 years,” Ms. Tilley Gill said. “One thing is for sure, and that is that corporations have to change, or else they will have a difficult time maintaining a sustainable workforce in the future.”

Related: What Companies Are Looking for In Younger Workers