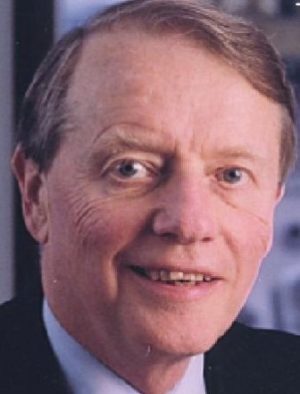 August 17, 2020 – Windle B. Priem, a veteran of the executive search industry and a former CEO of Korn Ferry, died on August 7, 2020 in Boston. “You can’t think about Korn Ferry and our history without thinking of Win Priem,” said Korn Ferry CEO Gary Burnison. “Over nearly three decades of service to Korn Ferry, he was a driving force and full of passion. When people talk about ‘standing on the shoulders of others’ to achieve great things – that was Win.”

“Win was devoted to this firm, a confidant of Richard Ferry and Lester Korn, and for all practical purposes, a founding partner of Korn Ferry,” Mr. Burnison added. Mr. Priem served as CEO of Korn Ferry from 1998 through 2001 and was responsible for helping to take the firm public, one of the first top-end recruiting businesses to do so. Prior to this, he held many important leadership roles, where, according to Mr. Burnison, “he applied his drive, discipline and competitive spirit to overseeing our global financial services practice, as well as our European and East Coast operations.”

According to colleagues, Mr. Priem also had the vision to understand the full dimension and potential for Korn Ferry’s future. Today, the publicly held executive recruiter and leadership concern dominates the sector with more than 100 offices serving over 50 countries with a staff of more than 7,000. Its market cap tops $1.7 billion.

“But more important than any business accomplishments (which were immense),” said Mr. Burnison, “Win was a person who changed lives – within our firm, with the clients he served and in our industry. His presence was felt long after he retired. In fact, whenever I meet someone from our firm’s formative days, it was never long until they would ask about Win – and share a story about how he made a difference to them personally and professionally. All of us who benefit from the company today owe a great deal to Win.”

Even rivals respected and admired Mr. Priem. “Win Priem was a first class professional and a friend as well,” said Russell S. Reynolds Jr., chairman of RSR Partners and the founder of Russell Reynolds Associates. “He was a builder and highly respected contributor to the executive recruiting business and he will be deeply missed.”

Another contemporary of Mr. Priem, Thomas J. Neff, chairman of Spencer Stuart U.S., said: “Win was a fierce competitor and respected professional. One of the giants of the search industry.”

Born in Worcester, MA, in 1937, Mr. Priem had the good fortune of a “people-person” father in Louis Carl Priem and a “no-nonsense powerhouse” mother in Helen Windle Priem. Combining those qualities ultimately led Win to the CEO post at Korn Ferry. He led over 100 high-profile executive searches for major global companies. Friends would comment that Mr. Priem was surely less than “six degrees of separation” from every CEO of a Fortune 100 Company in America. Joining Korn Ferry in 1976, Mr. Priem thrived in the executive search industry for the next three-plus decades.

“Win helped redefine the role of executive search with uncompromising professional standards,” said Richard M. Ferry, the search firm’s co-founder. “He developed a treasure of business and personal relationships that enhanced the firm, and as CEO he successfully guided Korn Ferry through its public offering in 1999 and then on into the new millennium. He was an extraordinary leader who was serious about the profession, serious about serving clients and serious about making Korn Ferry the finest executive search firm in the world.”

Before assuming Korn Ferry’s CEO role, Mr. Priem served as the firm’s COO, responsible for its global search business, which encompassed all four of Korn Ferry’s regions, as well as the firm’s specialty practices. Before that, Mr. Priem served as president of Korn Ferry’s North American operations and had long been responsible for the firm’s global financial services business – at that time the leading practice among the top rivals. He conducted senior-level executive searches for financial institutions, insurance companies and investment banking firms worldwide. Mr. Priem recruited more than 80 presidents or chairs for major financial institutions.

Prior to joining Korn Ferry, Mr. Priem was regional director of the U.S. Small Business Administration for New York, New Jersey, Puerto Rico and the Virgin Islands. Previously, he was a vice president in corporate banking for Marine Midland Bank in New York from 1964 to 1972. It was during this time, in 1970, that Mr. Priem met a PanAm flight attendant from Ft. Smith, Arkansas, who added a southern twang to her rusty Italian on PanAm flights to and from Rome. Susan Steele Priem and Mr. Priem enjoyed a marriage nearing 50 years – long and happy enough to christen 10 boats with the name SUPRIEM.

Mr. Priem earned a bachelor’s degree in Mechanical Engineering from Worcester Polytechnic Institute in 1959. Following college, Officers’ Candidate School in Norfolk led to his rank of Lieutenant in the U.S. Navy and service in that military branch from 1959-1962. By 1964, he had completed a Master’s in Business Administration from Babson College and later would attend Harvard Business School’s Program for Management Development.

Diagnosed with bone marrow cancer in 2018, Mr. Priem was nevertheless determined to make his last years productive ones. He joined Fidelity Investments as executive consultant to the firm’s Private Wealth Management Division becoming, as, he liked to say, “Fidelity’s third oldest employee.” Fidelity colleague Roger Hobby said: “Win never complained about his health. He was present, accepting and focused on what needed to be done. He taught us to never stop striving to be of value, never stop learning and never stop adding to the mix to make things better.”

“Win was one of the great early leaders of the modern executive search era,” said Christopher W. Hunt, co-founder and president of Hunt Scanlon Media, the strategic advisory and communications business serving the recruiting sector. “He was a superlative recruiter and a tough negotiator,” he added. “Along with Russ Reynolds, Egon Zehnder, Gerry Roche, Tom Neff and, of course, Lester Korn and Dick Ferry, Win was an early advocate of Hunt Scanlon,” said Scott A. Scanlon, the firm’s co-founder and CEO. “My fondest memories of Win are sitting in his Park Avenue office discussing the importance of passion, discipline, and integrity. Our business was in its infancy in the late 1980s and his advice underpins every decision we make today.”