Menu
View our Events
Stay Connected:
He was the ultimate kingmaker – a search veteran who placed some of most well-known chief executives in business over five decades. Let’s take a look inside the legendary career of a true trailblazer. 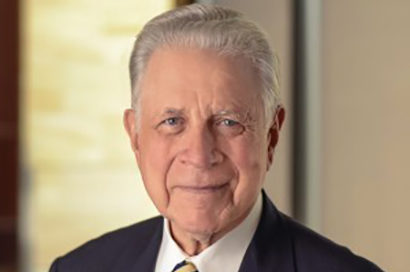 September 6, 2018 – Gerard R. Roche, one of the most recognizable names in the long history of executive search, has died at the age of 87.

Mr. Roche placed hundreds of top CEOs, board members and other senior executives over a storied career spanning more than half a century. Along the way, he changed the course and trajectory of business history. His 1983 recruitment of John Sculley from PepsiCo to the CEO post at Apple helped establish a new business standard: that skills honed in one industry can adapt, and even thrive, in another.

“Today, skills transferability seems so basic; but three and a half decades ago it was hailed as fresh and innovative thinking,” said Scott A. Scanlon, founding chairman and CEO of Hunt Scanlon Media. “Kodak, Goodyear, Chubb, AT&T, Coca-Cola and Walt Disney are just some of the world’s marquee companies that came to rely on Gerry’s talents to find new chief executives – and with them, new direction and enhanced competitive advantage. Even the National Football League tapped him to find its new commissioner at a time when sports teams rarely went to the outside for staffing help,” said Mr. Scanlon. “Gerry thought outside the box and approached every search and every candidate with care, due diligence and respect. An entire industry and others connected to it mourn his loss.”

Mr. Roche might best be remembered for a search he conducted 22 years ago with his longtime rival, Thomas J. Neff, of Spencer Stuart. In an effort to broaden the field of candidates for the open CEO post at IBM, James E. Burke, chairman of the search committee, teamed up ‘Tom & Gerry’ to handle the assignment.

The controversial idea to join two rival recruiters was devised, in large part, to sidestep search industry off-limits guidelines. The plan prevailed and Louis V. Gerstner Jr. — one of Mr. Roche’s candidates — walked away with the top job. Messrs. Roche and Neff competed head-to-head for many top assignments for years to come, but the two would join forces professionally just one other time. 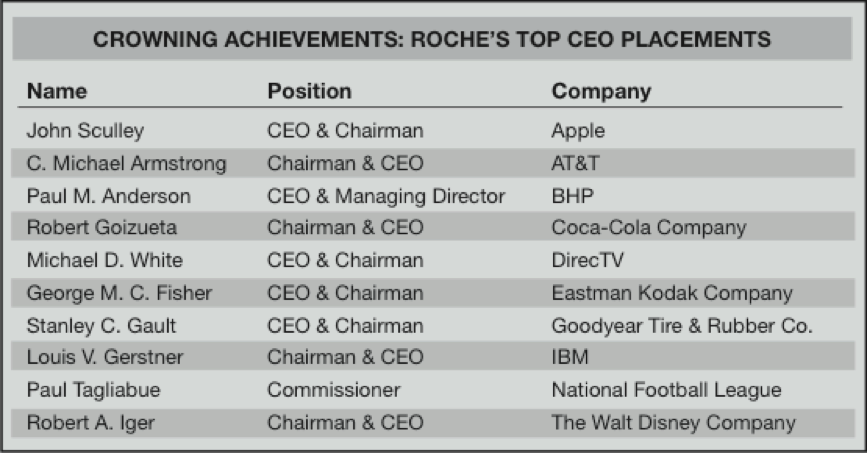 When once asked to pick his most important CEO placement, Mr. Roche said that to do so would be like choosing which child was a favorite. Nevertheless, as the years went on it became clear that his recruitment of John Sculley to Apple was, in fact, his favorite. It was a hallmark assignment that set a new high bar for Mr. Roche — and set standards of excellence for an entire industry that was also upping its game.

Mr. Sculley, at first glance, seemed an unlikely choice. He was a top executive at PepsiCo, and far from a technology expert. But Mr. Roche instinctively knew that Apple needed a fresh perspective and that skills honed in one industry could, in fact, transfer to another. It was a game changing approach to CEO recruitment.

Inside the Legendary Career of Gerry Roche

In this interview with Executive Search Review in 2014, Gerry Roche reflects on his 50 years in search which started in 1964 when Gardner Heidrick needed someone to lead the firm’s fledgling New York office. Gerry reluctantly signed on. Here, he talks openly about his first big breaks, including finding four presidents for CBS where he worked with, and under, the heavy thumb of, its larger than life CEO, Bill Paley.

Gerry also discusses his well-known rivalry with Spencer Stuart’s Tom Neff, with whom he worked to tap IBM’s new chief in 1993 in a well-publicized search. Gerry reflects on his long- time friendship and professional relationship with Jack Welch, the legendary CEO of GE, and he provides a rare glimpse into the unique style and approach that catapulted him to the top of the recruiting industry. Read the full interview here!

“I was taking someone who was selling soda pop to selling computers,” said Mr. Roche in an interview in 2014 with Executive Search Review. “But Steve Jobs told me very specifically that he wanted someone who understood consumer marketing because that’s where computers were going.”

In the 1970s, Mr. Roche began a long association with Jack Welch who later became the legendary CEO of General Electric. “At the time, Gerry was conducting a mid-market CEO search,” Mr. Welch said in an Executive Search Review interview four years ago. “I first met Gerry in the early 1970s,” said Mr. Welch. “I felt very comfortable with him and liked him a great deal. Several years later, he contacted me about an Allied Chemical job. The encounter didn’t persuade me to leave GE, but my trust in Gerry was well-placed, as there was never a rumor about my leaving.”

Jack on Gerry: “It’s All About the Chemistry”
As CEO of GE from 1981 to 2001, Jack Welch set new standards on how CEOs lead and manage, and along the way he revolutionized the company. One of his greatest achievements was identifying and developing great talent, and many who worked for GE during his tenure blossomed professionally.

One result was that GE became a breeding ground, and an incubator, for executive-level talent that would from time to time rise up, and out, of GE to run some of the country’s best known conglomerates. It was a testament to the importance that Jack Welch put on people. During his CEO tenure, one or two trusted talent advisors stood out. Gerry Roche was one of them. Here’s why.

The two ultimately worked in partnership when Mr. Welch announced his own retirement from GE. But there was a twist: In a process to name his successor, Mr. Welch brought in both Mr. Roche and Mr. Neff to assess GE’s three internal CEO candidates: Jeffrey R. Immelt, James McNerney and Robert Nardelli.

Mr. Immelt got the nod — and it was left to Mr. Roche to handle the delicate placement of the two not chosen. Mr. Roche had two plum CEO openings on hand, one at 3M and the other at Home Depot. Mr. McNerney quickly took one, Mr. Nardelli grabbed the other. Mission accomplished.

“During that evening when both CEOs were pondering their futures, Gerry entertained Chris Hunt and me at a small hideaway for dinner in Bedford, New York in Westchester County,” said Mr. Scanlon. “It was a spot we three frequented often as it was halfway from his home in Chappaqua and ours in Greenwich. What stands out most about that dinner is that Gerry Roche never turned to a cell phone for an update from either candidate. He said he’d made his best pitch and the decision was now in someone else’s hands. Sheer confidence.” 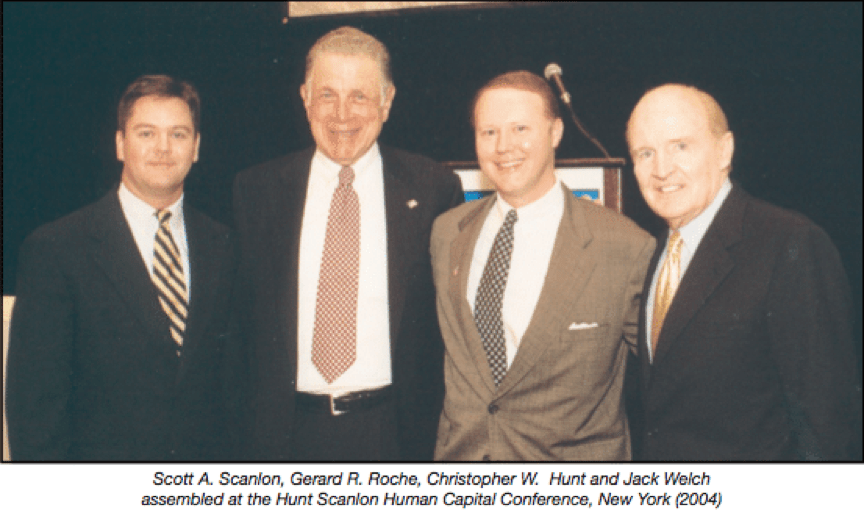 “The passing of Gerry Roche marks the end of an era,” said Mr. Hunt, president of Hunt Scanlon Media. “Gerry represented old school recruiting – a time when evaluating talent was raised to an art form. As Gerry often told us, ‘Anyone can spot a tall ship in the harbor – but the real skill is knowing how and when to bring that ship into port.’ He was a consummate professional who combined a human touch with wisdom, judgment, intelligence and, most importantly, common sense. News of his passing darkened our office today. Gerry will be deeply missed.”

“Gerry Roche was a giant in the executive search business,” said Mr. Welch. “His keen eye for talent and his understanding of job requirements made for many of the great executive matches in the last 40 years. Gerry’s integrity set the tone in every search he undertook.” Both candidates and clients could always be assured of his straightforward approach, he added, “recognizing each of their needs in a very human way. Gerry set a very high bar for all search practitioners to follow.”

“Gerry Roche was funny, smart, loyal, creative, and spoke his mind,” said Russell S. Reynolds Jr., chairman of RSR Partners in Greenwich, Conn. “He could be a fierce competitor, but also inspiring.  Once, when I was running Russell Reynolds Associates I asked Gerry to speak at our global firm conference in San Francisco. He seemed surprised that I would ask a competitor, but when I told him it would inspire our firm, he said he’d do it! Then his wife reminded him of another commitment!! I owe a lot to Gerry Roche,” said Mr. Reynolds. “He was genuine and spiritual and a key contributor to the early rise of the executive search profession. He will be missed and hard to replace.”

In 1999, Mr. Roche was named “Recruiter of the Century” in a Hunt Scanlon poll of several thousand industry peers. “Gerry was a formidable competitor — always a gentleman,” said Mr. Neff, his long-time chief recruiting rival. “We all owe him a debt of gratitude for elevating our profession in the eyes of the business world. I cherished his friendship.”