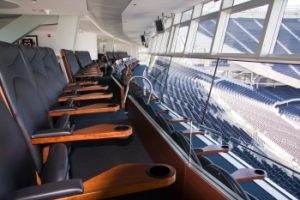 On the search and placement, Mr. Perna remarked that “working with Ilitch Holdings is a dream job. I mean that for us at Turnkey, as the search firm, and also for Chris Granger, who is now their top exec. Chris Ilitch is total class. The Ilitch family has built one of the biggest and most impactful companies in the industry – no sports company has done more for their community,” he said. “We were honored to conduct this crucial search.”

In this role, Mr. Granger will work closely with president and CEO Christopher Ilitch to optimize the fan and partner experience at all Ilitch-related venues. He will help to grow, recruit and retain the significant talent in the business side of the company’s sports and entertainment organizations. In addition, he will help to collaborate with partners to ensure highly active, attractive and community-focused venues, and more. To achieve these goals, Tom Wilson, president and CEO of Olympia Entertainment and Duane MacLean, EVP of business operations for The Detroit Tigers, will report directly to Mr. Granger.

“Bringing Chris to Detroit and to our organization is a big win,” said Mr. Ilitch, president and CEO. “His proven history of innovation, fan-first approach and community commitment are a perfect fit for our team as we prepare for the opening of Little Caesars Arena and ongoing development across The District Detroit. We’re incredibly excited to add Chris to our already very strong team.”

Prior to joining the Kings, he worked in various capacities for the NBA from 1999-2013. He most recently served as the EVP of the NBA’s team marketing and business operations function, where he advised NBA, WNBA and NBA Development League teams on all aspects of business operations including ticket and partnership sales, marketing, community relations, communications and digital media.

“I’m excited to join Ilitch Holdings at this unprecedented period of growth and opportunity,” said Mr. Granger. “This organization knows how to do things right for fans, partners and the community, and I look forward to contributing to the dynamic, transformative and impactful work underway.”

Mr. Perna recently sat down with Hunt Scanlon Media to discuss the search and what executive search firms bring to sports organizations. 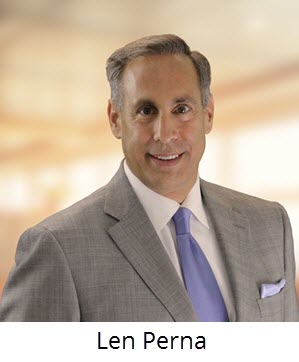 Len, what type of leader was Ilitch looking for?

Ilitch Holdings has been in major league sports for 35 years. During that period, they have acquired assets including the Detroit Red Wings, Fox Theatre, and the Detroit Tigers. Now they are opening a new arena called Little Caesars Arena, and EW developing 50 downtown city blocks called District Detroit. In the group president, sports & entertainment role, they needed a master integrator who could transition all these independent entities into a single, cohesive operation, and evolve that single operation as a platform for future growth. In short, they needed a world class leader who could bring a strategic vision as well as a hands-on, customer-centric operational focus.

What made Chris the right fit for this role?

Chris Granger started his career at Disney learning customer-centric operational excellence. He then ran the NBA’s in-house TMBO Group, which studies and then shares best strategic and operational practices across all NBA clubs. Then, he applied all that to building and opening the best new arena in the NBA for the Sacramento Kings. There were a number of outstanding candidates for the group president role, because the job was so attractive to so many in the sports and entertainment business. Chris rose to the top because of his skills, his operational philosophies, and his down-home Midwestern work ethic and charm. He’s a perfect fit culturally, and every other way.

Why was this role an appealing position for candidates?

Mr. Granger now has one of the largest, most compelling positions in sports and entertainment, certainly in North America, but perhaps in the world. He sits on the board of governors for two major leagues (the NHL and MLB, as a representative of the Red Wings and Tigers respectively), and also will play a pivotal role in a third major league (the NBA, because he is helping the Detroit Pistons return downtown as a tenant in the new Little Caesars Arena). That’s three of the four major sports. Chris will also be heavily involved in launching the new music and live entertainment booking joint venture between Ilitch Holdings and the Pistons/Palace. Finally, Chris will be coordinating the continued investment and development of the District Detroit, an amazing mixed-use entertainment district spanning 50 city blocks in the center of downtown Detroit. In short, the role is appealing because Chris landed the dream job!

Can you share some similar search work you are currently involved with or have completed in the past?

Turnkey Sports & Entertainment is a boutique executive search firm that conducts approximately 50 searches each year. In total we’ve done more than 1,000 searches since 1996 with all of them being in sports, entertainment and media. In the last few years we can completed searches across the full spectrum of pro sports, college sports, media and live entertainment. A few recent searches include: president of the new NHL franchise in Las Vegas; general manager of basketball operations for the Atlanta Hawks; CEO of the Miami Dolphins; CEO of VStar Entertainment; and athletic directors at the University of Alabama, Tennessee, Georgia Tech, Minnesota, and Michigan, among others. Turnkey is currently seeking a president of the Professional Fighters League (a new competitor to the UFC) and the commissioner of World Team Tennis.

How has the use of executive search firms among sports organization grown over the last several years?

When Turnkey was founded in 1996, there was only one other executive search firm in sports and entertainment that was dedicated to the industry. The larger search firms had maybe one person doing a handful of searches each year. A decade later, in 2006, the industry was using search firms regularly for top business positions at teams, leagues, agencies, brands, colleges, NGBs, etc. In the last 10 years, the industry has grown comfortable using search firms to fill positions on the sports performance side, i.e., coaches, general managers, scouts, etc. While the field has become very crowded with many smaller firms, there are still only a handful of firms that are considered best in class.

What do search firms bring to sports organizations?

“Search firms bring the same value proposition to sports organizations that they bring to any other businesses. The business is very competitive. There is a fine line between winning and losing in business (same as on the field).”

That fine line is almost always determined by the quality of the talent in the business. Businesses with the best people often also have the best strategies, products, services, customer experiences, etc. The sports and entertainment business is a very, very competitive place that is undergoing a paradigm shift in how fans (consumers) engage and consume. New technologies and distribution methods are not only increasing the value of sports and entertainment assets, but also putting an even larger premium on the caliber of talent within an organization. All of this change in sports and entertainment has made search firms more important and more impactful than ever before.