Menu
View our Events
Stay Connected:
Dominic Lévesque, president of Tatum, looks at the future of private equity and how it is impacted by leadership. 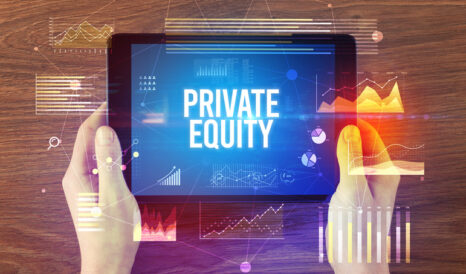 September 16, 2021 – Among the central paradoxes of COVID-19 is the disconnect between our day-to-day lived experience of the pandemic — in a word: “stagnation” — and the ways in which it forced the business world to actively adapt, change and evolve. In that sense, 2020 felt less like a moment of acceleration, as many commentators have suggested, than a year when the future was inexorably pulled forward.

Meanwhile, private equity firms have been pulling strongly in a direction all their own, not only bucking the challenges impacting other businesses but clearly passing key inflection points for growth. According to Dominic Lévesque, president of Tatum: “We’re seeing huge reserves of dry powder on tap, and along with it, sky-high valuations,” he said. “Small wonder, then, that the 2021 Private Equity Outlook from Pitchbook teems with hints of broken records.” Mr. Lévesque says to consider forecasts like the following, for instance: PE fundraising is on track to surpass $330 billion in 2021, an all-time high; overall deal value for carveouts this year could reach the highest levels ever recorded; at least 20 PE-backed companies are expected to enter public markets in the U.S. by way of reverse mergers with special purpose acquisition companies (SPACs).

“Add to that the fact that SPACs themselves raised $83 billion in fresh capital in 2020 — more than six times the previous record — and you’re looking at the lit fuse on a powder keg,” Mr. Lévesque said. Watch out, he warned: things could get explosive. “Of course, that’s really just the overall industry outlook for PE. As strategic partners who deliver business-critical human capital solutions to our PE clients, where exactly does it leave us?”

To answer that, Mr. Lévesque said we need to take a closer look at some of the latest trends shaking up the world of PE. By calling out what’s new — and what isn’t — on the executive recruiting side of things, he spotlights opportunities where recruiters can contribute even greater value.

“We’ve touched on some of the reasons we expect the remainder of 2021 to be action-packed in the PE space, but there’s a lot more to the story than just the Pitchbook predictions,” said Mr. Lévesque. “And to prove it, let’s quickly flesh out the 30,000-foot view in a little bit more detail. For starters, it’s worth reminding that everything about the PE experience during the pandemic ran more or less directly counter to the dominant narrative of businesses shuttering, of furloughs and layoffs, of gloom and doom and disaster.”

Dominic Lévesque is the president of Tatum, a Randstad company. Mr. Lévesque brings more than 15 years of experience to the role, having most recently served as group president, Randstad Canada. He will now hold a dual role leading both Tatum in the U.S. and his Canadian team. Since joining Randstad as a staffing consultant in 2006, Mr. Lévesque has held several management positions within the company. His extensive team building skills propelled him to group president of Professionals in 2016 where he oversaw the finance & accounting, HR and sales & marketing specialties.

Against, and yet concurrent with, such rampant economic decline, PE firms quietly went about their business, according to Mr. Lévesque. “And what business they did: Firms in the venture industry as a whole generated an astonishing $73.6 billion in funds during 2020, for example, shattering the previous high-water mark of $68.1 billion in 2018,” he said.

Looking ahead, what’s more, Mr. Lévesque says that there are reasons to believe even more capital may soon be available for deployment in PE’s already well-stocked coffers. “Chief among them are two words that have not necessarily always sounded very sweet to the players in this space: regulatory change,” he said. “First, last June the U.S. Labor Department indicated that it would allow “defined-contribution retirement plans” — think: 401(k)s — to indirectly invest in PE funds, at least under certain circumstances. Second, in August the U.S. Securities and Exchange Commission (SEC) amended how it defines an ‘accredited investor’ in such a way that provides greater latitude around who can legally invest in venture capital. Finally, an amendment to the so-called Volcker Rule ratified by the Federal Reserve Board, CFTC, FDIC, OCC and SEC means that banks will have greater flexibility in investing in venture-capital funds going forward.”

All good things — and good reason to expect PE firms will be chomping at the bit to make some serious investments. In fact, several appear poised to do exactly that.

Where are PE firms most of all looking to deploy their stockpiles of dry powder right now? Start-ups, start-ups, start-ups. Bain Capital Ventures, for example, recently raised $1.3 billion in seed money to fund start-ups. But they’re certainly not the only ones eager to get in on the action. Even astrology start-ups, part of the “mystical services market” valued at $2.1 billion, are apparently fending off sedulous investors right now (“Investment in Big Zodiac seems … preordained,” quipped The New York Times).

But you don’t have to read the tea leaves to identify the bigger-picture trend: Across the board, start-ups are seeing unprecedented, and truly historic, levels of venture capital investment, according to Mr. Lévesque. “For those that are eyeing potentially lucrative IPOs, what’s more, it’s safe to assume internal capability-building is going to emerge as a priority in parallel. It usually does,” he said. “And as a result, look for a number of cash-flush companies, in a bid to mature their financial management processes, to bring in their first-ever CFOs. When they do, that will present an excellent opportunity for strategic partners like executive recruiting firms to step up to the plate and deliver value. Frankly, it’s an opportunity that’s here already.” In the past 12 months alone, he said, there’s been a 95 percent increase in the number of CFO appointments at U.S. start-ups compared to the period previous.

For executive search firms recruiting top-notch financial leadership, of course, it should also go without saying that the competition is going to be tough. “That’s why we’re saying it,” Mr. Lévesque said. “Meanwhile, one tier up in the org chart is another seat where we expect to see strong demand for executive recruiting services. Why? Because the road to organizational maturity is more often than not a rocky one.”

Historically, for example, one study found that firms transitioning between the first rounds of venture capital financing and their IPOs, changed CEOs more than 40 percent of the time. Rocky, indeed — but also a clear opportunity.

So fearless, responsible and experienced top-level leaders (always a safe bet) should be a particular focus area for strategic partners, according to Mr. Lévesque. “But there’s also an interesting caveat here,” he said. “That is, physical distance — literally the number of miles separating the location of a start-up from that of a venture capital firm — has been historically cited as a key driver of CEO turnover. So the question naturally arises: Is it possible that our ‘new normal,’ and the sweeping normalizations of digital collaboration and remote work it has engendered, will make for smoother sailing, and potentially even minimize the distancing effects of physical distance going forward? What impact might that have on client-side demand, at least at the CEO level?”

Only time will tell. But based on Tatum’s experience, the firm is wagering on the side of “little to none.” Fast-moving executive recruiting firms, those that can come to the table with a stable of vetted CEOs with relevant industry experience, will likely find that their value-propositions require just that much explanation: little to none.

“At the same time, executive search firms will need to be attuned to some of the ways that operating in such an explosively charged, dynamic environment is going to have fallout for talent as well,” Mr. Lévesque said. “In the venture-backed start-up context, for example, seasoned finance leaders who are open to taking on new challenges — and willing to bring greater maturity to the operations of fledgling start-ups, in particular — will discover they have a lot of leverage in doing so. The choice of title, for example, will be pretty much at their discretion. Ditto how their compensation gets structured. Cash, as mentioned, seems to be no object right now.”

Related: A Look at the Current State of Private Equity Recruiting

Yet again, Mr. Lévesque said this is an area where executive search firms and other strategic partners can shine right now — it’s actually a pretty interesting new lever. That is, PE firms these days are rethinking compensation wholesale. Within the C-suite especially, firms want to connect pay to a raft of performance-related KPIs, and environmental, social and governance issues in particular.

From a diversity, equity and inclusion standpoint, the PE space has made measurable gains of late, to be sure. But even a cursory, over-the-shoulder glance is enough to tell you that there’s still ample room for improvement. For starters, female partners remain a relative rarity in the world of start-ups and PE in general: Most estimates put the numbers at one in 10 and one in five, respectively. In terms of racial diversity, the numbers are even worse: An estimated one to two percent of managerial roles in PE are currently held by blacks, trailing behind the ethnic and racial composition of the larger U.S. population.

Corporate clients understand that competitive advantage is found in winning the talent game, and that happens when you increase the number of resources used to create a rigorous, exhaustive, comprehensive go-to-market strategy for talent. The problem with many PE firms is that while they are exceptional in financial diagnostics, they are less than exceptional in human diagnostics. Mike Myatt of N2Growth examines the dilemma with Hunt Scanlon Media.

“These are narratives that your PE clients are desperate to change, of course — and as a strategic partner, you’ll help drive that,” said Mr. Lévesque. “But there’s also reason to think the fundamental challenge cuts even deeper. The problem can’t just be accounted for as a matter of representation anymore, in other words. Indeed, the data suggests that women in the PE space may be disadvantaged in other ways as well.”

How so? Mr. Lévesque said take the fact that PE-backed start-ups founded exclusively by women currently claim only 2.3 percent of overall total capital investment, for one thing. Add just one man into the equation, however, and the picture suddenly changes dramatically: Mixed-gender founding teams, by comparison, saw roughly 11.4 percent of total VC and PE investment, for example.

No doubt, data points like these are part of what keeps HR leadership in PE up late at night. “Finally, it’s worthwhile to note that, despite some evidence of modest region-by-region variation, the lacuna of female leaders appears to be more or less broad based: that is, the numbers look fairly consistent across all 50 states,” Mr. Lévesque said. “For recruiting firms catering to PE clients with aggressive timelines, that means the challenge of delivering an appropriately diverse slate of candidates is going to be just as tough in, say, Des Moines as it will be in New York, Austin or San Francisco.”

Proactively pipelining right now is probably the only way around it, according to Mr. Lévesque. “What’s more, given the deeply rooted, coast-to-coast nature of the problem, it might also be the only way to put yourself at a competitive advantage when clients invariably come knocking,” he said. “But whatever approach you ultimately take, consider this fair warning — because delivering greater gender diversity for your PE clients is guaranteed to be a cornerstone of their ask.”

After an absurdly challenging year, the current outlook should have PE leaders everywhere smiling, Mr. Lévesque said. And their strategic partners, too. “Perhaps most excitingly, at least from where we sit, are all of the new opportunities on the horizon for us to create value.”

Related: What’s Next for Talent Management in Private Equity