Menu
View our Events
Stay Connected:
A new report from McDermott + Bull reveals how organizations can benefit from promoting women. The study explains the strategic benefits of placing women in leadership roles, the statistics that back the claims, possible explanations, and what businesses and women can do to expedite progress, boost profitability, and increase innovation. Let’s take a closer look. 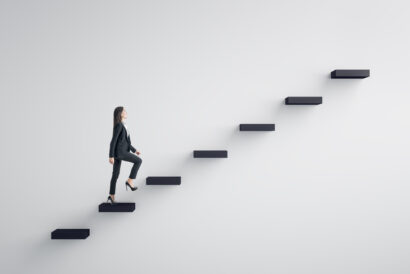 October 15, 2021 – From negotiating pay to combating biases and non-inclusive workspaces, women face a variety of challenges in proving their worth in the workplace. Yet, there is an abundant and growing amount of research that substantiates that companies with women in leadership positions are more innovative and make more money. A new report from McDermott + Bull reveals just how organizations can benefit from promoting women. The report, co-authored by Heather Cameron and Mackenzie Jones, breaks down the research by explaining the strategic benefits of placing women in leadership positions, the statistics that back the claims, possible explanations, and what businesses and women themselves can do to expedite progress, boost profitability and increase innovation.

“There is an abundant and growing amount of research that substantiates the fact that companies with women in leadership positions are more innovative and make more money,” said Ms. Cameron. “While it is not clear exactly why, evidence suggests that diversity, not just gender diversity, makes companies more profitable, innovative and respected.”

A study at the University of Arizona found that companies with women in leadership roles produce more patents, by an average of 20 percent more than companies comprised of male-dominant executive teams. Pepperdine University followed over 200 Fortune 500 companies for about 19 years and uncovered a strong correlation between promoting women to C-suite roles and an increase in profitability of 18 to 19 percent over the median Fortune 500 business.

“We like people who are like us, but that same cozy comfort may be a contributing factor to groupthink, which we know is detrimental to innovation and independent thought — two necessary ingredients for a successful business,” Ms. Cameron said. “Among homogenous leaders, the ease of similarity and agreeability may be self-limiting. Innovation is bound to flourish when you introduce different sets of skills, ideas, thoughts, and life experiences to your organization. It is not about minimizing men – their opinions are necessary – but about including and empowering women and diverse groups.”

Heather Cameron serves as director of talent acquisition and operations for McDermott + Bull Canada where she is responsible for executive level talent acquisition; internal hiring and operations; and leadership of the firm’s search execution team. Her practice is focused on private equity and private equity portfolio companies. Ms. Cameron is also responsible for stewarding the McDermott + Bull Executive Network throughout Canada.

Statistics At a Glance

The term “Double Pane Glass Ceiling” refers to the challenges women face at the top of Canada’s corporate climb. There is the challenge of getting women in the room and equal pay when compared to their male counterparts. Research by the Canadian Centre for Policy Alternatives (CCPA) into 249 publicly traded companies in Canada calculates that women in executive roles earn 68 cents to every dollar earned by their male counterparts.

While a pay gap exists between men and women in Canada at all levels, with women in Canada between ages 25 to 54 earning an average of $26.92 per hour and men in Canada in the same age range earning $31.05 per hour (2018 data), McDermott + Bull focus on executives for this research.

Gender-based wage disparity warrants further attention. The report notes that women have surpassed men in educational attainment and have increased their representation in high-status jobs, yet they still make less per hour than men. “But that progress wanes when the magnifying glass moves upward within the organizational hierarchy,” said Ms. Jones. “Despite this positive trend, women remain at a disadvantage in the workplace because of the opportunity gap. If employers are serious about closing the pay gap, they need to think just as much about closing the opportunity gap. The opportunity gap can be explained as the situation where women remain in entry-level positions and do not advance to leadership roles within an organization, while their male counterparts move up the ladder at a faster rate.”

“We could provide a laundry list of proposed reasons why these gaps exist, including the fact that men in executive positions have more experience than women,” said Ms. Cameron. “Perhaps men carry themselves with a little more executive presence. Perhaps women are less assertive or worried about social repercussions of asking for more, so they refrain altogether. Or perhaps a bias exists, even if unconscious or subliminal. It could be all or none of these things.”

“One prevailing explanation of why women make less money is that they are less likely to negotiate their salaries or ask for a raise than men are,” she said. “This is the driving thought behind many popular business books aimed at empowering female professionals.”

“Another explanation is that employers often base their starting salaries for executives on the individual’s previous salaries,” said Ms. Jones. “If women have a history of making less money than men in the same role, and their new employer determines compensation primarily on merit, women will not be disadvantaged when they switch companies.”

Mackenzie Jones serves as a research associate for McDermott + Bull Canada where she is responsible for candidate and market research, project coordination, content and report creation, copywriting, assisting in search execution, and supporting M+B Canada’s partners and principals.

Another explanation is the “Motherhood Penalty” and the “Fatherhood Bonus,” suggesting that women take off more time to tend to children, often because childcare is too expensive, and thus are penalized because of part-time or insensitive work arrangements, while men get a bonus — tied to the idea that men are breadwinners and need more money to feed the family once they have children, the report says.

“Or maybe women are less assertive, less confident, or even less respected by their colleagues due to inherent biases against them,” said Ms. Jones. “But the answer is likely much more nuanced than any single explanation.”

What Can Your Business Do?

“If you are in charge of hiring talent for your company — put women in your pipeline for executive roles, and seriously consider them,” said Ms. Cameron. “If you have internal up-and-comers, consider all candidates, male and female alike. If you are predisposed to discredit women or assume they are ‘not the right fit,’ ask yourself, ‘Why do I feel this way?’ Get comfortable with getting uncomfortable. It will be the first challenge to engineering change, but it will pay off later,” she said. “Offer women the same experiences that you offer men. Encourage them to take a seat at the table and share their ideas. Listen to their ideas. Encourage the female and male leaders at your company to mentor up-and-coming talent.”

Related: As Women Gain Seats on Boards, Minorities Fall Back

McDermott + Bull list five concrete steps you might consider implementing to expedite progress and uplift female talent at your organization.

1. Recognize your bias and boot it out of the way. Biases likely exist whether you are male or female and regardless of your opinion on the pay gap and opportunity gap. The first step to changing your perception is recognizing your preconceived notions.

2. Promote women to management. The notion that women are less qualified or educated is no longer valid. Statistics revealed that in Canada, women outnumber male graduates at every level of education except the doctoral level, where women accounted for 45.6 percent of the graduates. In the U.S., there are more college-educated women than men in the workforce, albeit women still lag when it comes to reaching the highest level of leadership in both countries. If the argument is that women lack the years of experience in management necessary for a promotion, then there is only one way to solve that challenge – give women opportunities to grow and provide a career path to leadership.

3. Train them. Groom them. Empower them. Value them. Avoid creating a boys’ club. Offer women the same experiences you would offer a man in the same position.

4. Reference women. Consider who you quote for your business articles and presentations. Beyond Bill Gates or Henry Ford, include quotes from inspiring women; doing so normalizes their credibility and helps pave way for progress.

5. Let women talk — and then listen. Studies show women talk less than men in public forums. Unfortunately, this means their ideas, insights, and perspectives may go unheard. An important step for companies to take is to give women the mic and let them share ideas, uninterrupted.

What Can You Do as a Woman?

“The onus for leveling the professional playing field does not fall on companies alone. It is also incumbent on the employees who work for them,” said Ms. Cameron. “In this section, we offer 10 tips and tricks for women to take control of their careers and create a path to success that includes growth in role and income, but also recognition for their work.”

2. Learn how to network and stick to it: Networking is a key element to any successful career. Networking is not just about trading information; it is also about building lasting relationships and gaining access to resources. When you get better at networking, you will see your professional status grow, along with self-confidence.30 You never know when or how you will find your next opportunity; it could very well happen through networking.

3. Be positive: If you have a positive attitude, people will enjoy working with you, and it will be easier to get ahead.

4. Seek a diverse mentor base: The importance of quality mentors cannot be stressed enough. It is important to seek diversity in your mentors. For example, working with male mentors enables women to gain experience in developing an effective relationship with a male leader and help both parties to broaden their perspective.

5. Ask for honest feedback: Some research suggests that women receive less favorable feedback than men. Women should ask for honest, constructive feedback and avoid taking it personally. Use feedback to improve and set yourself up for your next growth opportunity.

6. Know your potential and talk about it: Women are less likely to self-promote and, on average, rate their performance lower than men do. However, there is no gap when men and women evaluate others’ performance. This phenomenon may contribute to disparities in promotions and pay.

Related: Here’s How Women Leaders Can Win Their First Board Seat

7. Raise your hand, strategically: It has been suggested that women may take on more non-promotable tasks when compared to their male counterparts. These tasks are required for organizations to run but are time-consuming and less highly rewarded during performance evaluations. If promotions are your objective, be strategic about the tasks you take on, and consider volunteering for tasks that you know are valued and rewarded.

8. Keep tabs: Be able to tangibly demonstrate how your work helps benefit the company. Put your metrics on paper. While you know everything that you do for your organization, not everyone else does.

10. Just ask: Many women feel that their work should speak for itself. Truth is, you do not know what your work says about you. And, even if it is saying a lot of great things, you do not know that anyone is listening. Christa Quarles, CEO of OpenTable, said at her first job, she quickly climbed the ladder, but her salary stayed behind. Christa realized that she was underpaid, so she brought this to her supervisor’s attention and asked for more. Her manager reviewed her salary and gave her a raise.

“The case for promoting women to executive positions is strong,” said Ms. Cameron. “It will take organizations at large and the individuals who make them up, male and female, to initiate and maintain direction. We have come a long way, but the race is far from over.”