Stay Connected:
A worldwide talent shortage of more than 85 million people could occur by 2030, which could lead to $8.5 trillion in unrealized revenue, says a new report by Korn Ferry. Let’s explore the study and the potential consequences for the many industries struggling to find talent. 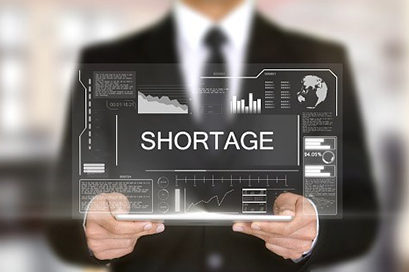 May 14, 2018 – By 2030, demand for skilled workers will outstrip supply, resulting in a global talent shortage of more than 85.2 million people, according to a newly released report by Korn Ferry. The study found that left to run its course, the shortage will result in nearly $8.5 trillion in unrealized revenue in the economies analyzed.

The eye-opening figures are the latest in Korn Ferry’s multiyear “Future of Work” series, which describes a looming and unexpected talent shortage across industries and continents. This most recent report, ‘Future of Work: The Global Talent Crunch,’ examined talent supply and demand in 20 economies across the world in three broad industries: finance/ business services, technology/ media/ telecommunications, and manufacturing. Projections were based on forecasts from international labor organizations and government statistics and then analyzed by outside economists.

The report found signs already emerging that within two years there will be too little talent to go around. In countries with low unemployment and booming manufacturing production, including the Czech Republic, Poland, Hungary and Slovakia, a labor shortage has already accelerated automation and increased use of robotics – not to replace people, but because there aren’t enough of them to fill the factories.

The U.S. alone could miss out on $1.7 trillion in revenue because of labor shortages, or roughly six percent of its entire economy. While leaders are betting heavily on technology for future growth, 67 percent of CEOs believe “technology will be their chief value generator in the future of work – they cannot discount the value of human capital,” said the study.

“Even companies that are using more robotics foresee a growing need for human talent with advanced skills.” One example would be the redeployment of people from the factory floor, where robots can perform repetitive work, to the research laboratory. The problem, however, is the mismatch between technological advances, including automation, artificial intelligence, and machine learning, and the skills and experience workers need to leverage these advanced tools. Technology cannot deliver the promised productivity gains if there are too few human workers with the right skills. This has set the scene for a global talent crunch.

“To deal with this skills mismatch, we’re seeing some companies building their own talent pipeline by hiring straight from school or college,” said Jean-Marc Laouchez, president of the Korn Ferry Institute. “These younger workers can be recruited at a lower cost and trained in the company’s specific culture and ways of working. Constant learning – driven by both workers and organizations – will be central to the future of work, extending far beyond the traditional definition of learning and development.”

Financial and business services, one of the world’s most important sectors in terms of contribution to GDP, are the industries most threatened by severe talent shortages. The Korn Ferry study forecast a deficit of 10.7 million workers by 2030, equivalent to more than 45 times the global workforce of HSBC Bank.

The American financial services sector is projected to suffer the most. The $435 billion shortfall forecast not only accounts for a third of the global sector total in the research’s findings, but also is equal to 1.5 percent of the entire U.S. economy.

Why the Global Talent Shortage Might be Here to Stay
These are tough days for finding talent in virtually every market sector around the world. According to top global HR leaders and executive recruiters, it is a situation that is unlikely to improve anytime soon. Better economic times, low unemployment and technological innovation have all been a blessing.

Technology underpins all other sectors of the global economy, but its advancement could be stalled by serious talent problems. Such deficits are already evident, and Korn Ferry research forecast that by 2030 the labor-skills shortage will reach 4.3 million workers. This is equivalent to 59 times the number of employees of Alphabet, Google’s parent company. While the digital revolution often seems unstoppable, it could be about to hit a wall.

Currently the world’s leading technology market, the U.S. can expect to lose out on $162 billion by 2030 because of sector skills shortages. “These talent deficits may imperil America’s status as the global tech center,” the Korn Ferry report said.

“The United States is so far failing to equip the next generation with the new skills that are needed to fill large numbers of high-tech roles,” said Werner Penk, president, global technology market, at Korn Ferry. “As with many economies, the onus falls on companies to train workers, and also to encourage governments to rethink education programs to generate the talent pipelines the industry will require.”

A solid manufacturing industry is needed to meet domestic product demand, generate export revenue, and provide the equipment and instruments that other sectors need to flourish.

Yet manufacturing is headed toward a crisis, the Korn Ferry report found. By 2030, the sector faces a global labor shortage of 7.9 million workers, the equivalent of 39 times the number of Ford employees worldwide.

“Automation may promise great gains for manufacturing; indeed, technology may replace some of the labor at levels B and C,” said Yannick Binvel, president global industrial market, at Korn Ferry. “But the demand for people who can innovate, create, manage, and apply new developments – typically those at level A – will skyrocket, partly in response.”

“Jobs won’t disappear but they’ll evolve,” he added. “That’s why the talent crunch is a political problem too: Equal opportunities to learn and develop need to be offered to everyone. Whether individuals choose to take them will be a critical personal choice.”

Much of the shortage is based on simple demography, said the Korn Ferry report. Japan and many European nations, for instance, have had low birth rates for decades. In the U.S., the majority of Baby Boomers will have left the workforce by 2030, but younger generations will not have had the time or training to take many of the high-skilled jobs left behind.

The talent shortage may be difficult to envision now, with daily headlines about how robots and artificial intelligence are making their way into a growing number of industries. And the study shows how, at least in 2020, there might even be a surplus of talent in Russia and China.

But by 2030, Russia could have a shortage of up to 6 million people, and China could be facing a shortage twice as large. The U.S. could also be facing a deficit of more than 6 million workers, and it’s worse in Japan, Indonesia and Brazil, each of which could have shortages of up to 18 million skilled workers.

“In this fast-changing environment, workforce planning and a comprehensive understanding of the talent supply chain are critical,” said Korn Ferry. “Leaders need a deep understanding of talent marketplace economics to put the right planning and core proposition in place to ensure they have the skills their workplace needs.”

While technology will reshape the future of work, organizations will be unable to leverage it without the right talent, the report concluded. “It is only through the partnership of people and technology that the full potential of both can be realized. To secure their future, companies must look to address the talent crunch now,” said Korn Ferry.