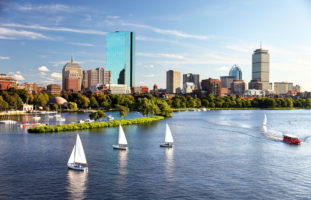 March 1, 2021 – Spencer Stuart recently assisted in the placement of M. Lee Pelton as the new president and chief executive officer of the Boston Foundation. Paul Grogan recently announced that he will be stepping down after nearly 20 years of transformative leadership with the organization. Mr. Pelton starts his new role on June 1. Mary Gorman, John Harpole, David Wick and Diane Carlyle led the assignment. Dr. Pelton was selected after a thorough months-long search that included input and feedback from the many constituencies of the Boston Foundation and the Greater Boston community. “Lee’s experience as a strong, seasoned leader who has innovated and managed in times of change uniquely places him to lead the Boston Foundation into a new era,” said J. Keith Motley, the Boston Foundation director who co-chaired the CEO search committee. “His enthusiasm for our mission, along with a skill set that readily embraces the full range of what we do, makes him a strong choice to lead the Boston Foundation as our next president.”

The search committee conducted a national search to find candidates who demonstrated strategic thinking and appreciation for the challenges that face the Boston area, and who had proven ability to lead on issues of equity, diversity and inclusion, and experience running complex organizations. “Lee’s experience is impressive, but what spoke to me most was his determination to use all his skills in service of the causes he cares about and to help the Boston Foundation build a better Boston – to call everyone in and leave no one out,” said Linda Mason, chair of the Boston Foundation’s board of directors. “In Lee, I believe we have found an outstanding leader for this critical moment in our city’s history.”

“Lee Pelton is a rare talent – a strong, respected voice and a force for social justice in Boston and beyond,” said Mr. Grogan. “He’s been a great partner and friend to the foundation during my time as president and CEO. I can’t imagine a better fit for the Boston Foundation as it enters its next era of work. The Boston Foundation board could not have made a better choice.”

Dr. Pelton comes to the foundation from a distinguished 30-year career in higher education, most recently as president of Emerson College. Throughout his career, he has worked to address social justice issues. A common theme in his lectures, speeches and writing has been to ask us “to share our talents and resources with those who have not had the good fortune to participate in the bounty of life.” He earn a doctorate in 19th century English and American literature and languages at Harvard University. He taught English and American literature at Harvard and served as what is now called a residential dean of Winthrop House. Later, Dr. Pelton  joined the Harvard board of overseers and was a vice chair of its executive committee. After Harvard, he was dean of the College at Colgate University and Dartmouth College before serving for 13 years as president of Willamette University in Salem, OR. Dr. Pelton became president of Emerson College in 2011.

“Lee’s leadership has been transformational to Emerson College and to the City of Boston,” said Jeffrey Greenhawt, chair of Emerson’s board of trustees. “Lee continued and solidified Emerson’s growing presence and influence in Boston, opened the new Los Angeles campus and global portal campuses on several continents, forged a historic and valuable alliance with Marlboro College, and established Emerson as a hub for arts, communication and the liberal arts, not just in Boston but on the global stage,” he said. “We know that Lee will do great things at the Boston Foundation.  We look forward to continuing to work with Lee to make our home in Boston a more just and equitable city.”

“The Boston Foundation has no equal, and I am deeply honored by the board of directors’ faith in my capacity to continue to grow its mission, and to lead the foundation in addressing the challenges facing our city and region, promoting a just and equitable recovery from the pandemic and a long-overdue racial reckoning so we can build and sustain a vital, prosperous city and region, where justice and opportunity are extended to all,” said Dr. Lee.

Mr. Harpole is a consultant within Spencer Stuart’s leadership advisory services and he is a member of the firm’s financial services practice. He has more than 20 years of private capital advisory and institutional investment experience, encompassing public equities, alternative- and real-assets.

Ms. Carlyle is a member of the firm’s education, non-profit and government practice. She brings nearly a decade of experience to her role, specializing in recruiting senior executives for clients in arts and culture, philanthropy, education, health and human services, and international development.