Stay Connected:
To better understand the workings at the top of a business, take a hard look at the differences and similarities between the visionaries and the leaders, says a new report from Executives Unlimited. Sometimes they are one and the same person, but that’s less common than you might think. 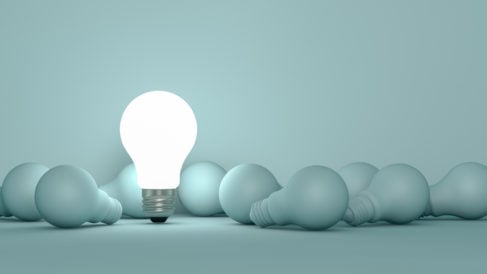 August 28, 2020 – Is there a difference between a visionary and a leader in any given organization? If you posed the question to a C-suite professional who’s led by a so-called “visionary leader,” they might say that a visionary and a leader are one in the same; any individual can exhibit both qualities. While this is certainly true, those gifted with both vision and discipline are rare, and they’re often more well known for being controversial figures.

Recognizing both the differences and similarities between visionaries and leaders in the executive ranks can help you better understand the leadership dynamics at play in your own organization, says a new report from Executives Unlimited. The study, “Visionaries v. Leaders: Who Does Your Organization Need Most?” takes a close look at modern-day examples of both visionaries and leaders, along with some renowned dynamic duos.

“Visionaries are exceptional creative forces who bring forward ideas to change the world,” said the report. “They see the potential of what could be, rather than what is. They are creators, inventors and often entrepreneurs. While they’re undoubtedly talented, they are often perceived as idiosyncratic or capricious.”

Take, for instance, Steve Jobs. “It’s been well documented that he could be dictatorial, difficult, and even mean-spirited,” said the Executives Unlimited report. “However, Jobs had a clear vision, a passion for Apple, and the competence and magnetism that was needed to  inspire trust in a brand that frequently bucked convention. Ultimately it was Jobs’ creative vision that allowed him to return to his role as Apple CEO in 1997 after departing the company in 1985.”

Visionaries can be prone to making unilateral decisions, sometimes lacking empathy for how those decisions may impact others in the organization, said the report. For instance, in 2018, Elon Musk tweeted that he was considering taking Tesla private. His hasty action resulted in a public relations and legal nightmare for the company. Musk followed that up with an appearance on a podcast, in which he smoked a cigar consisting of tobacco laced with cannabis and spoke about recreational drug use. The incident fueled rumors about his unstable behavior and resulted in a drop of Tesla’s stock price. “Given the enormous success and innovation of Tesla and SpaceX, it may be going too far to call Elon Musk’s leadership style ‘failed leadership,’ but it’s impossible to deny that his unilateral approach occasionally hurts Tesla’s position,” said the report.

Then there’s Mark Zuckerberg, who remains chairman, CEO and controlling shareholder of Facebook, the company he launched in his Harvard dorm room in 2004. “While he’s a passionate creative, Zuckerberg is also able to recognize his weaknesses alongside his strengths,” said the report. “A great example of his approach is the hiring of COO Sheryl Sandberg, who brings balance to the organization with her disciplined ability to execute on Zuckerberg’s vision. Facebook has seen its share of ups and downs and controversies in recent years, but Sandberg remains Zuckerberg’s loyal teammate who drives stability in the turbulent social media landscape.”

As evident in these examples, visionaries are often colorful personalities who are put in leadership positions because they are the inventors; however, their leadership and execution skills are not always aligned with what an organization needs to sustain stable growth. “This is an important takeaway for your own organization,” said the report. “Not every company is inventing new social media platforms or commercial space rockets, but every market-leading company needs innovation alongside the ability to execute creative ideas.”

Guided by her strategic acumen, she leads the Executives Unlimited team using her extensive skills to advise companies in qualifying, selecting, and engaging executives. Ms. Tilley Gill specializes in working with entrepreneur founders and family-owned businesses. She possesses expertise in a variety of industries and clients ranging from entrepreneurial middle market companies to PE firms to billion-dollar multinational corporations, publicly and privately held, including non-profits.

“By definition, companies that lean on formula and tradition can only ever achieve moderate standings in their industry–they will never lead it,” said the study. “But the companies who are subject to the whims of the difficult genius also suffer for it due to a lack of execution. For execution expertise, look to leaders who can share a creative vision.”

It’s one thing to create something knowing that it has the potential to change the world, but it’s another thing entirely to ensure the quality and sustainability needed to deliver it. “Leaders don’t have to be crazy risk takers when they are put in charge of generational, time-tested brands,” said the report. “Rather, they need to stay aligned with the company’s overall vision, motivate key teams and bring quality to the innovative products that are created. Leaders get things done by inspiring and exciting others, and they understand the organizational skills that are needed to implement great ideas.”

The study pointed to Mary Barra, CEO of General Motors, who rose through the ranks of the company and exhibited incredible work ethic in every role. “As CEO, she stays up to date on all new developments, and her oversight of innovative teams has allowed GM to take on new challenges successfully,” said Executives Unlimited. “A colleague noted her ‘consensus approach.’ and she’s been known to conduct town hall meetings to seek input on projects. Overall, Barra exhibits a leader’s empathetic qualities and creates an inclusive environment where employees can voice their opinions.”

Another example of iconic brand leadership is Roy Disney. “His younger brother Walt was the creative visionary and a great business man in his own right, but Roy is credited for being the financial genius behind The Walt Disney Co.” said Executives Unlimited. “He had excellent people skills, and was reportedly able to read a personality with a mastery that paralleled Walt’s ability to assign personalities to cartoons.” In 1945,Roy succeeded Walt as president to relieve him of administrative responsibilities, and later postponed his own retirement to oversee the building of Disney World after Walt’s death.

Bridging the Ground Between Vision and Execution

“Visionary leadership is widely considered the key to strategic change,” said the report, citing Harvard Business Review (HBR). “It’s not just about strategic direction, but inspiring others to embrace change and work hard to achieve it. HBR’s research has found that the positive impact of visionary leadership can break down when middle managers aren’t aligned with top management’s strategic vision. This can result in the impediment or failure of strategic change initiatives.”

In its earliest days, the Disney vision was a lot to take in, from colorful characters in cutting-edge animated films to a theme park of magical proportions. “Walt Disney was a once-in-a-generation visionary, but he relied on his brother Roy to share in his vision,” said Executives Unlimited. “Together, they built the team to execute a brand that defined a generation of children.”

Similarly, Steve Jobs had the vision to create a compact device with “1000 songs in your pocket,” but he couldn’t execute it alone. “He needed to surround himself with engineers and consumer marketing teams that believed in the product,” said the report. “Jobs also needed to be able to communicate and break down his ideas for other teams to understand. That quality applies to all visionaries. If you can’t communicate ideas to at least one other leader who can help translate them, innovation will stall and the company will not move forward.”

Visionaries and leaders also need to share a healthy dose of optimism. “They need to believe in the opportunity to create and remain optimistic that consumers will embrace new ideas and products,” said Executives Unlimited. “Companies that have an ample supply and adequate balance of shared vision with communication, optimism, and execution are well positioned for success.”