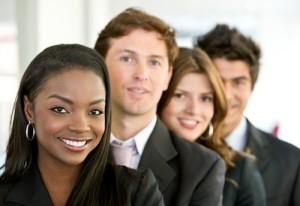 September 10, 2015 – Economic and job growth optimism is continuing to rise throughout the C-suites of small to medium-sized American businesses (SMB), according to a new report published by executive recruitment firm Lucas Group.

The Q2 2015 SMB Job Generation Outlook found that 66 percent of leaders at small to medium-sized companies across the U.S. feel optimistic about the country’s near-term economic prospects — a 15-point jump from the same period in 2014. When asked specifically about their own companies, prospects for the months ahead look even better, with small business executive confidence bumping up eight points from last year to 77 percent.

Recent rises in economic optimism at both national and company levels are coupled with increased hiring plans and job growth prospects. In the second quarter of 2014, 40 percent of survey respondents positioned their company in ‘growth’ mode and 45 percent reported plans for near-term hiring. One year later, six in 10 SMB executives across the nation say their business is positioned for ‘growth’ and 54 percent will hire in the coming months.

“The year-over-year optimism boost seen in this quarter’s SMB executive survey is an outward demonstration of a series of associated factors,” said Scott Smith, chief marketing officer at Lucas Group.

“The bolstering effect of consumer confidence plus consumer spending directly drives the forecasts of many small to medium-sized businesses. With unemployment numbers continuing to erode and the prices of gas and oil dipping lower, more and more consumers are ready to buy what SMBs have to offer. That raises executive confidence, and yet with the current volatility of the markets, only time will tell if today’s optimism will be realized with profits.”

While the collective health of small to medium-sized American businesses appears positive and executives are expressing plans to expand workforces, corporate talent acquisition professionals across regions and industries say they are challenged to find the talent they need. “That’s the potential clash we’re watching out for now,” said Scott A. Scanlon, founding chairman and CEO of Greenwich, Conn-based Hunt Scanlon Media.

“If the supply of top-flight talent that’s required cannot match corporate demand then we might very well see increased pressure on personnel who are in place to do more,” said Mr. Scanlon. “That could drive confidence levels down and ultimately impact the competitive advantages that American companies have built up through aggressive talent acquisition planning over the last six years.”

In fact, hiring difficulties have intensified for many small to medium-sized businesses, with 56 percent of Q2 respondents disclosing that finding and hiring qualified professionals is harder now than it was one year ago. Seventy-four percent of executives surveyed in Q2 2015 ranked ‘talent availability’ as among their top three business challenges, noting Information technology, sales and accounting & finance as functional positions toughest to satisfy. Surveys of leading executive search professionals by Hunt Scanlon over the last six months confirms these findings.

Lucas Group’s Q2 2015 survey also found that support among small to medium-sized business executives for easing immigration requirements for skilled workers in IT, science and other high-demand fields increased 10 percentage points. Fifty-six percent of SMB leaders surveyed in Q2 support easing requirements for this subset of immigrants, while only 23 percent disagree. During that same time period, the percentage of small to mid-sized businesses reporting difficulty in finding qualified IT talent has increased from 32 percent to 43 percent.

The changing generational make-up of the American workforce is presenting both challenges and opportunities for small to medium- sized businesses. Seventy-two percent of surveyed executives say Baby Boomer retirement is impacting their business, yet only 24 percent report specific plans to hire more Millennials.

While almost 60 percent of leaders at small to medium-sized businesses worry Boomer retirements create a ‘brain drain’ within the organizations, the same percent say they are not entertaining the prospect of hiring retirees back on a contract basis.

Since 2013, the SMB Job Generation Outlook has surveyed over 2,600 executive level leaders from small to medium-sized businesses across the U.S., capturing plans and opinions on an array of business, social and political issues, including minimum wage, take-home pay, immigration reform, governmental impact and general hiring trends.

Each of the respondents was CEO, CFO, COO, chairman, president, executive vice president and/or owner of their company. Survey respondents represented a variety of geographic regions and industries including manufacturing, finance/insurance/real estate, business services, IT and transportation. Eighty-six percent of Q2 respondents were from companies with fewer than 1,500 employees and 79 percent projected 2015 business revenues under $300M.