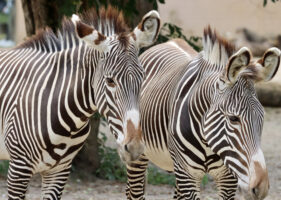 “Our challenge was to find someone who could build on the legacy of Dennis Pate,” said Mogens Bay, chair of the board of directors, Omaha Zoological Society. “We are confident that Dr. Padilla is that person. He was chosen after an extensive and thorough process by the search committee and is the next right leader for Omaha’s Henry Doorly Zoo and Aquarium. Dr. Padilla is a mission-driven leader who values collaboration, innovation, staff development, resiliency, and wildlife conservation. His background as a veterinarian ensures that the highest quality of care for Omaha’s animals and their habitats will remain a top priority and commitment.”

Dr. Padilla is currently the vice president of animal collections for the Saint Louis Zoo, where he is responsible for the overall oversight of the animal division, including the animal collection, facilities, and the animal care teams. He also serves as an accreditation commissioner for the Association of Zoos and Aquariums. Prior to this position, Dr. Padilla served as the Saint Louis Zoo’s director of animal health.

Dr. Padilla also served in veterinary roles and supervisory roles at the Saint Louis Zoo, the Smithsonian Conservation Biology Institute, the Smithsonian National Zoological Park, and the Oklahoma City Zoo. He received his doctorate in veterinary medicine from Cornell University. He also completed his residency in zoological medicine at the Saint Louis Zoo and is a board-certified zoo veterinarian under the American College of Zoological Medicine.

“I am extremely excited and humbled to lead the amazing Omaha’s Henry Doorly Zoo and Aquarium and its talented team,” said Dr. Padilla. “I look forward to serving the zoo and the Omaha community, while continuing the legacy of being one of the top zoos in the world. Omaha’s Henry Doorly Zoo and Aquarium is a globally recognized leader that is proudly beloved by its local community. To lead this organization, and to inspire, educate and engage in impactful conservation efforts, is the pinnacle of professional achievement. A visit to Omaha’s Zoo and Aquarium is a transformational experience that connects people to animals and wild places. It is special to make that happen through innovation, creativity, and science.”

Shelli Herman, who has 20 years of executive recruitment experience, has a strong record of leading searches and building upper management teams for a diverse clientele, including Fortune 500 companies. She has completed senior-level assignments in many industries, including consumer products, healthcare, high technology, and finance, as well as for non-profit and cultural organizations.

Last year, Shelli Herman and Associates recruited Dwight Scott as the next Dana Brown president and CEO of the Saint Louis Zoo. Ms. Herman led the assignment along with her associate, Krista Haley. “We conducted an extremely thorough international search to find the next great leader for the Saint Louis Zoo,” said Cynthia J. Brinkley, chair, Saint Louis Zoological Park subdistrict commission. Together, the search firm and the committee received and reviewed applications over the spring and conducted preliminary interviews during the summer months. The search committee narrowed the list of candidates down to a group of finalists, and the search committee, former Saint Louis Zoo Association presidents, former Saint Louis Zoological Park subdistrict commission chairpersons, and the zoo’s strategic operations team met with the finalists in September. “Dwight Scott rose to the very top of our list,” said Ms. Brinkley.