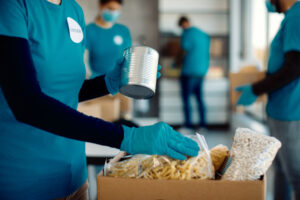 January 4, 2022 – Los Angeles-based Shelli Herman and Associates has assisted in the recruitment of Claudia Bonilla Keller as chief executive officer of Second Harvest Food Bank of Orange County, in California. Second Harvest board chair Dave Coffaro, speaking on behalf of the board of directors, said: “Claudia is the right leader to carry the organization into the future.” Mr. Coffaro, who has been serving as interim CEO since the departure of Harald Herrmann, will help support Ms. Keller through January to ensure a smooth transition.

Ms. Keller has served as chief mission officer since January 2020. She becomes the food bank’s second female to hold the top leadership position. “Second Harvest Food Bank is an organization that exemplifies excellence in everything we do,” said Ms. Keller. “I’m honored to work with a great team of staff, board members, our partner network, donors and the community. I’m thrilled to lead the organization in our next phase of assuring food security for all in Orange County.”

Prior to joining Second Harvest, Ms. Keller was with LA Promise Fund, American Heart Association and St. John. She is involved in several Orange County organizations. Ms. Keller is a member of the Dean’s Leadership Society at the University of California, Irvine, which supports the School of Social Sciences, and she was an original co-chair of the society. Last September, Ms. Keller received the Distinguished Alumni Award from the School of Social Sciences, given to one alum from each school within the university. She is a planning commissioner with the city of Placentia, CA.

Second Harvest was founded in 1983 and today employs 77 team members. In fiscal year 2021, the organization distributed nearly 60 million pounds of food through its partner network and served over 489,000 people per month on average. Its partners include houses of worship, schools, after-school programs, senior centers, shelters for the unhoused, soup kitchens and transitional housing facilities, and have hundreds of locations throughout the county.

Shelli Herman, who has 20 years of executive recruitment experience, has a strong record of leading searches and building upper management teams for a diverse clientele, including Fortune 500 companies. She has completed senior-level assignments in many industries, including consumer products, healthcare, high technology, and finance, as well as for non-profit and cultural organizations.