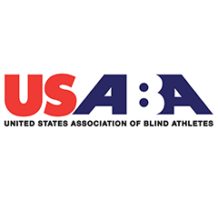 December 16, 2020 – The United States Association of Blind Athletes (USABA) has announced its new board of directors, which includes seven new appointees. Freehold, NJ-based Prodigy Search, a recruiting firm focused on sports recruiting, helped to lead the search process for the board member positions. The at-large board directors are chair Mark Ackermann; vice chair Dr. Skye Arthur-Banning; treasurer Gary Remensnyder; secretary Amy Wasson and David Cohen. Two independent directors, who are both new to the USABA board, are Eve Wright Taylor and Brian Eaton.

Dr. Arthur-Banning is an associate professor at Clemson University where he teaches within the community recreation, sport, and camp management area. He remains active in the field by hosting many camps for injured military veterans to showcase both blind soccer and CP (cerebral palsy) soccer, as well as presenting at various venues around the world on adaptive sport. As head of officials for the International Federation of CP Football, he has officiated in numerous international tournaments, most notably as a referee at the 2016 Paralympic Games in Rio de Janeiro.

Mr. Remensnyder is a retired business executive who has served on the USABA board for two terms. He worked for a publicly held sporting goods conglomerate before co-founding Lew’s Fishing, a fishing tackle business, in 2010. He retired in 2018.

Ms. Wasson is the product management director for vision at Anthem where she has worked for 15 years. She was introduced to USABA through its partnership with Anthem and has attended many USABA events over the years. Ms. Wasson remains passionate about supporting the organization’s mission of empowering blind athletes, changing lives and inspiring a nation.

Mr. Cohen is general counsel of Tempus Ex Machina, a sports tech start-up based in San Francisco. He is also the founder and CEO of Major League Business, a sports and startup consulting company. Prior to his current roles, Mr. Cohen worked as head of player operations for the Alliance of American Football. He also oversaw legal, security and other administrative functions for the Tampa Bay Buccaneers, was lead lawyer for Angels Baseball, and served as an athletic trainer for the Baltimore Orioles, Montreal Expos and Boston Red Sox.

Ms. Wright Taylor is a business executive and legal advisor with specialized experience in professional sports/entertainment, brand/retail, venue/event operations and the tech industries. She serves as a board director for USA Track & Field where she was the former audit committee chair and investment committee chair. She previously served as SVP of Unscripted, a global media tech company that hired her to build business infrastructure and U.S. business operations and to lead U.S. strategic partnerships and content acquisition initiatives.

Mr. Eaton is the director of global sponsorships at Cisco where he leads the sports and entertainment marketing and brand strategy. Eaton’s introduction to USABA came in 1994 when as an intern at the Olympic Training Center, he was recruited to manage media relations around the Goalball World Championships in Colorado Springs, CO.

Since its founding in 1976, USABA, a community-based organization of the United States Olympic & Paralympic Committee, has reached more than 100,000 blind individuals. The mission of USABA is to empower Americans who are blind or visually impaired to experience life-changing opportunities in sports, recreation, and physical activities, thereby educating and inspiring the nation.

Prodigy Search, which has been involved with the sports and entertainment business for 60 years, is one of the sector’s boutiques. The firm has placed hundreds of candidates into a variety of functions and roles. It represents all disciplines, including senior management, sales, marketing, operations and administration.

An industry veteran with nearly 40 years experience in wide array of disciplines within the sports and entertainment business, Scott Carmichael founded Prodigy Search in 2007. Prior to founding the firm, he served as head of the National Hockey League’s Club Marketing department for nearly ten years.