Menu
View our Events
Stay Connected:
Over 17 million Americans have now filed for unemployment benefits over just the last three weeks. The speed and scale of the job losses are historic and unprecedented. 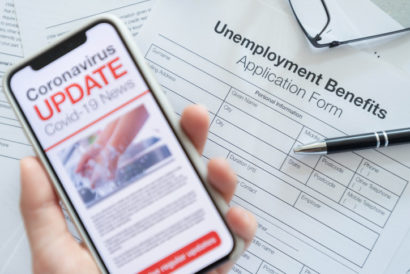 April 9, 2020 – Americans displaced by the coronavirus crisis again filed unemployment claims in historic numbers with the last seven days, with the Labor Department reporting Thursday a new surge of 6.6 million workers. Over 17 million people have now filed for unemployment benefits in three weeks. Economists were predicting 5.5 million jobless claims for the week. The prior week’s record-breaking figure was revised higher to 6.8 million from 6.6 million. The figures do not take into account millions more who have attempted to file claims in all 50 states, but have been unable to access decades-old claims systems.

Most of that job decline came in restaurants and drinking establishments though healthcare and social assistance also took a hit. Economists are expecting the U.S. economy to fall into a recession in the second quarter, before staging a comeback later in the year after the spread of the virus slows. How that comeback happens, and whether it occurs as a V-shaped recovery or a longer, drawn out U-shaped recovery remains to be seen. Experts have been split down the middle as to how, and when, the recovery will begin. But, begin it will – everyone seems to agree on that.

Forty-three states accounting for about 95 percent of the U.S. population are under stay-at-home orders, with nonessential businesses such as restaurants, stores, movie theaters and other outlets closed or sharply scaled back.

“The number of workers filing to collect unemployment insurance benefits has broken records in each of the last two weeks, but we suspect there are more to come,” said JPMorgan economist Jesse Edgerton. “The number of workers in industries directly affected by COVID-19 is massive. We thus again see more reasons to expect an increase in claims than a decrease.”

“Millions of Americans are filing for benefits, and that means the economy is not just staring down at the abyss, it has fallen off the cliff and down into the depths of recession,” Chris Rupkey, chief financial economist at MUFG Union Bank, said in an email Thursday. How far it goes is anyone’s guess, he said, as 17 million people are out of work and not paying essential bills like rent and health insurance.

Unemployment on the Rise

In addition, employment fell by 701,000 last month as the U.S. unemployment rate rose to 4.4 percent, according to the most recent U.S. Bureau of Labor Statistics report released this past Friday. Employment in leisure and hospitality fell by 459,000, mainly in food services and drinking places. Notable declines also occurred in healthcare and social assistance, professional and business services, retail trade, and construction.

“There’s no comparison to this shock,” Gregory Daco, Oxford’s chief U.S. economist, told the Wall Street Journal. “The sudden drop in economic activity is like what you’d see in an area after a natural disaster or a terrorist attack, but it’s occurring across the entire country.”

“Covid-19 has had the multiple impact of tragic illness and loss along with economic hardship for many,” said Robin Judson, president at Robin Judson Partners. “It has particularly highlighted the intersection of a loss of employment with the loss of health insurance in the time of pandemic, with little recourse for those affected. Regardless of one’s point of view about the role of government versus the market in providing solutions in normal times, this is clearly the time for government at all levels to step up and step in to provide for those who are the most affected by illness and unemployment.”

Remote Working Not for Everyone

As the crisis unfolded last week, the team at Summit Leadership Partners engaged in conversations with client management teams, CEOs and CHROs at a variety of organizations across several industries, helping them navigate their decision making during the crisis.

In a report yesterday, the Congressional Budget Office said it expected the unemployment rate to top 10 percent this quarter, reflecting the historic surge in new jobless claims. Bank of America economists, meanwhile, said yesterday that they expected as many as 20 million jobs will be cut in the coming couple of months amid the outbreak, leading to a peak unemployment rate of nearly 16 percent. To give that figure context, at the height of the global financial crisis, the unemployment rate reached as high as 10 percent in the fall of 2009. Some analysts predict the United States could double that figure by June.

Nearly every state providing comments cited the COVID-19 virus impacts. “States continued to identify increases related to the services industries broadly, again led by accommodation and food services. However, state comments indicated a wider impact across industries,” according to the Labor Dept. report, which also cited healthcare and social assistance, manufacturing, retail and wholesale trade and construction as among the industries most heavily affected.

A fresh report just released from the National Bureau of Economic Research has found that working from home during the pandemic crisis will not be an option for two-thirds of American workers. Researchers found that a strong association between the ability to work remotely with high wage positions, while sectors such as hospitality and agriculture would be harder hit.

The study, which shows that only 37 percent of American jobs can be transitioned to telecommuting, provides “an important input to predicting the economy’s performance during this or subsequent periods of social distancing.” In essence, concluded the report, nearly two-thirds of all U.S. jobs cannot be done remotely during the coronavirus outbreak.

Valerie Frederickson, an HR recruiter and founding CEO of Frederickson Partners based in Silicon Valley, said in an open letter to clients this week: “We’re living in unprecedented times. This global pandemic and ‘sheltering in place’ have added new concerns to daily business for all of us. For some employers it’s business as usual and as simple as asking everyone to work from home. For others, it’s a challenging time involving complex schedules, layoffs, high risks and uncertainty.”