Menu
View our Events
Stay Connected:
Over 22 million Americans have now filed for unemployment benefits over just the past month. States continue to be overwhelmed with by first-time filers, and those bottlenecks will eventually let loose more unemployment claims in the weeks to come. Economists predict 25 to 30 million Americans will ultimately join the unemployment line by late May. 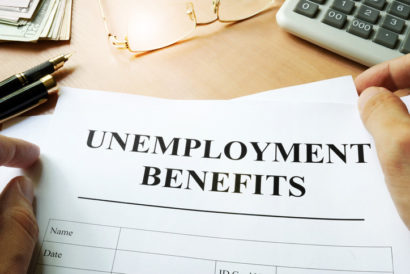 April 16, 2020 – Americans displaced by the coronavirus crisis again filed for unemployment benefits in historic numbers within the last seven days, with the Labor Department reporting Thursday a new surge of 5.245 million claims. Over 22 million people have now filed for unemployment benefits over the past month. Economists were predicting five million jobless claims for the week. The figures do not take into account millions more who have attempted to file claims in all 50 states, but have been unable to access decades-old claims systems.

States continue to be overwhelmed by first-time filers, with massive backlogs in unemployment claims piling up in California, Georgia, Michigan, and New York, among many others.

Most of the job decline came in restaurants and drinking establishments though healthcare and social assistance also took a hit. Economists are expecting the U.S. economy to fall into a recession this quarter, before staging a comeback later in the year after the spread of the virus slows. How that comeback happens, and whether it occurs as a V-shaped recovery or a longer, drawn out U-shaped recovery remains to be seen. Experts seem to now believe a longer recovery will take place, and that job recovery will not come fast or be as easy as simply rehiring displaced staff. Adding to their concerns is the problematic Payroll Protection Program, which is said to be nearly empty of funds. Without that vital lifeline in place, many businesses will now turn to mass layoffs.

“As we fully know the current state of the labor market with mass waves of layoffs, the key question turns to how many of these people will be rehired when the economy starts to reopen,” Peter Boockvar, chief investment officer at the Bleakley Group, told CNBC. “We can assume it will take a long time for that to happen but hopefully we’re getting closer to at least getting started.”

“While we believe the magnitude of increases in claims have moved past the peak, the cumulative number is still rising, likely reaching the range of 25 million over the next few weeks,” Morgan Stanley economist Jan Kozak said in a note Wednesday.

Most U.S. states have now implemented “shelter-in-place” orders. “There is some evidence that states that implemented lockdowns earlier are seeing their claims numbers ease (Pennsylvania, California, New York). However, this is being offset by increased claims in states with more recent lockdowns (Virginia, Georgia),” Nomura economist Lewis Alexander said. “As we move further away from the date of initial lockdowns, claims should begin to normalize somewhat further.”

“The labor market is obviously very, very important, and has a high correlation with what is going on in the economy,” Jay Bryson, the acting chief economist at Wells Fargo, told NBC News. “It is showing us what I think we all know, that the economy is falling off a cliff at an unprecedented rate.”

“While today’s jobless numbers are down on last week, they still mean that all the job gains since the financial crisis have been erased in the space of just four weeks,” Seema Shah, Chief Strategist at Principal Global Investors, told The Guardian. “What’s more, with many workers, including those in the gig economy, not included in these numbers, labor market pains may be even worse than these numbers suggest.

“However, concerns for the second half of the year may be underestimated,” she said. “Although governments are looking to lift lockdowns, the re-opening of economies will be only gradual, compounding financial strains for businesses and households, suppressing demand and suggesting a slower economic recovery.”

Indeed, since June 2009 the U.S. economy added over 20 million jobs; but in just the span of the last four weeks the number of unemployment claims has reached 22 million. It is an astonishing about-turn for a once testosterone-fueled economy.