Stay Connected:
Effective onboarding can be the difference between success or failure for a new executive. But many organizations lack a structured onboarding process. A recent CareerBuilder report looks at the impact of this shortcoming. 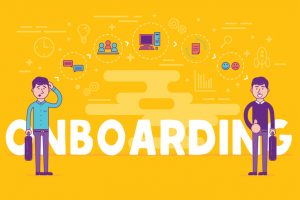 May 31, 2017 – Seeing less than desirable performance from your new employees or your department? It just may be your onboarding process – or lack thereof. According to a recent CareerBuilder survey, over a third of employers (36 percent) lack a structured onboarding process, and a significant number are reporting costly consequences.

The study also explored the consequences associated with manually collecting onboarding documents versus automating the process, which resulted in everything from delayed start dates to required documentation, like compliance forms, gone missing. The national survey included a representative sample of more than 2,300 hiring managers and human resource professionals across industries and company sizes.

How much time is being invested in onboarding? One in four employers (25 percent) reported that their company’s onboarding process takes a day or less. Twenty-six percent spend a week, while 21 percent said the onboarding process occurs over the course of a month. One in 10 employers (11 percent) said their company extends this further and onboards employees over the course of three months or longer.

What are companies missing in the onboarding process? While many cover the basics of what new employees should know walking into an organization, a significant number do not. When asked what their onboarding approach included, respondents said less than half of employers provide a company overview (49 percent) and individual training or set goals (45 percent). Companies are also failing to introduce company culture (42 percent), don’t provide a team welcome (39 percent), and many are not having the technology ready before a new employee arrives (38 percent). In addition, goals and expectations for the employee’s role with defined milestones and success metrics, a detailed overview of the company and growth opportunities, and a lack of a mentor assigned to the new hire all came in at 30 percent or more when asked what companies are lacking in their onboarding processes.

Failure to Develop, Engage and Retain Talent Is Growing
Businesses are not in tune with their employees’ perceptions of engagement, training and career development. There needs to be a consistent employee feedback across age groups and genders in order to gain an accurate measure of engagement across an entire organization.

What is the impact of not automating onboarding? Technology not only makes the onboarding process more efficient, it cuts down on mistakes. Not all companies, however, are handling the process digitally. Looking at a subset of HR managers, 39 percent say they electronically capture most or all of their onboarding information for new hires at their company, while 47 percent capture some of it. One in seven (14 percent) capture none of it electronically.

“While onboarding is a critical component of setting new employees up for success from day one, this study shows some companies are neglecting fundamentals in the onboarding process – and running into serious consequences that can impact the bottom line,” said Rosemary Haefner, chief human resources officer at CareerBuilder. “Employers need to establish a comprehensive checklist for every new employee and incorporate more automation to provide a better, more efficient experiences for employees, their managers and HR.”

Why Onboarding Is Key to a Successful Recruiting Strategy
Effective onboarding can make or break an executive’s success in a new role, yet less than a third of organizations actively support their executives to adapt to the cultural and political climate – which rank as the top reasons new leaders fail.

“Too many businesses believe they are successfully bringing newly hired executives into the fold, when in reality they are simply covering administrative basics,” said Egon Zehnder partner Mark Byford. “That level of onboarding is outdated and largely ignores the most challenging obstacles for new leaders – unfamiliar cultural norms and expectations.” The consequences of improper onboarding, he added, include financial repercussions and talent retention issues. “Organizations must focus on getting integration right upfront to ensure new leaders succeed in today’s high-stakes environment.”

Egon Zehnder recently released a report that identified five major tasks that leaders must undertake in their first few critical months. These are the areas, said the search firm, in which they need the greatest integration support:

Even with the best possible exchange of information during the recruiting process, any leader in a new role (especially an outsider) will have an incomplete picture of the business — its strengths, weaknesses, opportunities and threats. A new leader builds his or her credibility by demonstrating awareness of important operational issues, swiftly solving urgent problems, and identifying and achieving quick wins. Good early decisions on the ground have a material impact on his or her reputation as an effective leader.

2) Taking Charge of the Team

New leaders naturally focus on their direct reports at the outset. They know they must quickly confirm or adjust the team’s composition and goals. It is often easier to decide toward the beginning whether or not to retain people, because the team’s makeup is not then seen as the new leader’s choice.

But this window soon closes, and focus and discipline are required to efficiently gather information for smart decisions. It’s valuable to allow a new leader to take a fresh look at the talent without coloring his or her view in advance. And it’s equally valuable to share insights about individual team members’ performance and development. Striking the right balance requires careful planning and coordination with HR and, typically, one or more facilitated sessions between the executive and the team during the first few weeks.

The goal is to create a safe environment for both to give timely, constructive feedback and to ask potentially awkward questions when relationships are just beginning to form. In this way any misperceptions about the leader’s words, actions or initial decisions can be identified and clarified before mistrust or doubt about his or her values or capabilities takes hold. Building trust early enables the new leader to make key decisions with confidence that people will follow through.

New leaders must also gain the support of those they have no direct authority over, including their bosses, peers and other colleagues. Because they arrive with little or no relationship capital, they have to invest energy in building connections, and clearly signal that they know it’s a priority.

After identifying the most important stakeholders outside their teams, they must take time to understand their colleagues’ expectations and develop a plan for how and when to connect with people. That means learning how decision making works in the organization, who has influence over it and where the centers of power reside.

4) Engaging With the Culture

It’s also critical to get up to speed on the values, norms and guiding assumptions that define acceptable behavior in a new organization. Missing cues early on can negatively affect how others perceive a new leader’s intentions and capabilities. The executive must also walk a fine line between working within the culture and seeking to change it.

Finally, the new leader must start to shape strategy. Sometimes executives are hired for their expertise in a particular approach; other times they are chosen for their ability to develop and implement an entirely new strategy. If a new strategy is required, corresponding elements of the organization — its structure and its talent management and performance measurement processes — must be transformed to execute it. Either way, the new leader must be clear about the path ahead.

Taken together, these five transition tasks present a daunting challenge. Missteps in any area can lead to serious problems or even derailment. Effective integration is much more likely when leaders understand — before they start in their new roles — how much progress they’ll need to demonstrate in each area during the first few months. That way they can prioritize their time effectively.

The Most Vital Component of Any Search Process