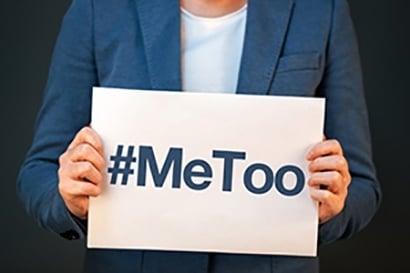 November 7, 2018 – FTI Consulting and women’s leadership firm Mind the Gap found that about 55 percent of the professional women surveyed said they are less likely to apply for a job and 49 percent are less likely to buy products or stock from a company with a public #MeToo allegation.

“Build a culture that will not tolerate sexual harassment. Wake up and drive changes. Most women have experienced sexual encounters in the work place. Drive the ‘zero tolerance’ and be part of the best places to work. Sad we needed #MeToo but we did and we still do and with that, action.”

“Companies that are already doing the right things will have nothing to worry about. Organizations who are in the midst of change can continue to fine tune their practices to ensure that everyone (men and women included) feels safe, supported, and heard in the workplace,” she said. “My general sense here is that when executives think about what they are doing both in public and private, one salient question must be: Is this practice, action or policy something we would stand by both in the boardroom and in the news media? The right things are still the right things!”

“Build a culture that will not tolerate sexual harassment. Wake up and drive changes. Most women have experienced sexual encounters in the work place. Drive the ‘zero tolerance’ and be part of the best places to work. Sad we needed #MeToo but we did and we still do and with that, action.”

“The reality of the employment situation in this country right now is that professionals have more options, and that includes women,” said Stacy Pursell, CEO of the Pursell Group. “There are more job openings and more job opportunities available. So, taking that into consideration and operating against the backdrop of the #MeToo movement, it makes perfect sense that women are being selective in their choice of employers and avoiding those that have been implicated in allegations,” she said. “The conditions exist in the marketplace for them to be selective, and they’re leveraging those conditions.”

“It’s encouraging that executives have changed their behavior in the wake of the #MeToo movement. That’s indicative of a conscious effort to improve the culture and the atmosphere of their organizations,” Ms. Pursell said. “It’s also indicative of an effort to avoid any behavior that could be construed or interpreted as harassment. While this is good news, it’s also partly reactionary in nature, to the point where some executives may be excluding female employees from business-related activities to completely eliminate the chance of an allegation.”

“As it’s only been a year, it will take time for a more balanced approach to manifest itself in the employment marketplace and for organizations to devise and implement sensible strategies for combating harassment while still providing opportunities for women to thrive in the workplace,” Ms. Pursell added.