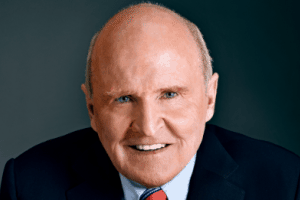 October 14, 2014 – As CEO of GE from 1981 to 2001, Jack Welch set new standards on how CEOs lead and manage, and along the way he revolutionized the company. One of his greatest achievements was identifying and developing great talent, and many who worked for GE during his tenure blossomed professionally. One result was that GE became a breeding ground, and an incubator, for executive-level talent that would from time to time rise up, and out, of GE to run some of the country’s best known conglomerates. It was a testament to the importance that Jack Welch put on people. During his CEO tenure, one or two trusted talent advisors stood out. Gerry Roche was one of them. Here’s why.

ESR: In ‘Straight from the Gut’ you said that when you were being considered for the CEO post at GE by CEO Reg Jones you took a call from Gerry Roche who, at the time, was looking to fill the CEO position at Allied Chemical. Was this your first contact with Gerry? What were your first impressions of him?

Welch: I had actually first met Gerry in the early 1970s when he was conducting a search for a mid-market CEO position. I felt very comfortable with him and liked him a great deal. Several years later, he contacted me about the Allied Chemical job you mentioned. Neither of these encounters persuaded me to leave GE, but my trust in Gerry was well-placed, as there was never a rumor about my leaving.

ESR: Gerry recruited from GE more than to GE (if at all) so how did you balance your relationship with him – especially when he would recruit away some of your top lieutenants like Larry Bossidy?

Welch: With respect to Larry Bossidy’s departure, Larry was a star and was ready to run a significant company. I was happy for both of them, and our close relationships were unchanged.

ESR: When you announced your retirement from GE three leading inside candidates were considered to replace you. Jeffrey Immelt was ultimately extended the job. The other two candidates were Jim McNerney and Bob Nardelli. What role did Gerry play at that time since he ultimately recruited McNerney to 3M and Nardelli to Home Depot?

Welch: With respect to the subsequent departure of two of the candidates related to the GE succession plan, after we narrowed our CEO selection process to three candidates, all three were encouraged to talk to Gerry. At the time one of them was selected as CEO of GE, all three of them had outside CEO jobs in their hands.

ESR: Was there an advantage to developing both professional, and personal, relationships with top recruiters?

Welch: I had wonderful personal and professional relationships with the two best recruiters of my time – Gerry Roche and Tom Neff of Spencer Stuart. It’s all about the chemistry. These relationships have been, and continue to be, helpful and enjoyable.

ESR: To what extent do you see social media technologies affecting the search process and do you think it will ever replace, or significantly reduce, the role that someone like Gerry plays in recruiting C-suite talent?

Welch: Social media is just another mechanism to gather more information about talent. It is complementary to the process – but it will never replace the personal touch or evaluation skills of people like Gerry.

ESR: I know you’ve played a lot of golf with Gerry. How do you rate his game?

Welch: Gerry is a terrific guy and a beautiful family man. As for golf, even at 83, he shouldn’t give up his day job for the game!