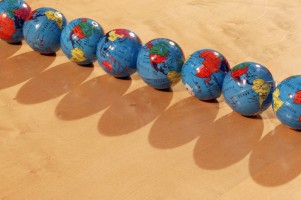 March 9, 2016 – Korn Ferry (NYSE:KFY) posted third quarter revenue of $272.3 million, a nine percent gain (14 percent gain on a constant currency basis) from $249.5 million in the third quarter of last year. Including revenues related to its Hay Group acquisition, revenues totaled $344.2 million. The acquisition of Hay Group was completed on December 1.

The third quarter increase was driven by continued strong performance of its executive recruitment segment, which pulled in revenues of $154.6 million, an increase of 7.8 percent from $143.5 recorded last year. Within North America, executive recruitment tallied revenues of $93.5 million, a rise of 20 percent from revenues of $78 million during the third quarter a year ago. The EMEA region posted revenues of $35.5 million, a decline of four percent, while Asia Pacific ($19.1 million) and South America ($6.5 million) posted decreases of nine percent and 15 percent, respectively.

Futurestep, the firm’s online recruiting business, saw revenues climb to $49 million, an increase of 17.5 of percent, compared to $41.7 million a year ago.

“Despite the threat of economic contagion at the beginning of this calendar year, I am pleased to report 14 percent year-over-year growth in fee revenue at constant currency in our third fiscal quarter – excluding the legacy Hay Group business,” said CEO Gary D. Burnison.

The integration of Hay Group is an on-going effort by Korn Ferry and has included typical consolidations over the last several months of people and redundant operational expenses, including a number of offices – all targeted at improving Hay Group’s cost base. So far, these actions have resulted in charges of about $30 million. Korn Ferry expects additional charges of approximately $20 million to come within the next few months.

Mr. Burnison said Korn Ferry has completed the initial synergy phase of its combination with Hay Group; the company acquired Hay for $452 million late last year. “Over the last few weeks, we have launched phase two of our Hay Group unification, which incorporates growth areas such as the expansion of our intellectual property, solutions and offerings,” said Mr. Burnison. He said Korn Ferry expects to “substantially complete” the last phase of its integration activities by late July, just eight months from the closing date of its Hay acquisition.

Just yesterday, Korn Ferry declared a quarterly dividend of $0.10 per share, payable on April 15, 2016 to stockholders of record on March 25, 2016. The company said it expects revenue in the range of $379 million to $399 million for its coming fiscal fourth quarter. Analysts surveyed by Zacks had been expecting revenue of $412.9 million.

Korn Ferry shares have fallen 17 percent since the beginning of the year. The stock has declined 14 percent in the last 12 months.

Check Out These Related Articles On Korn Ferry: