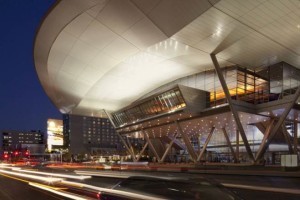 December 15, 2015 – Korn Ferry has recruited David M. Gibbons as executive director of the Massachusetts Convention Center Authority (MCAA). He becomes the third leader in the history of the MCCA, taking over for James Rooney, who left it to run the Greater Boston Chamber of Commerce.

In his role, Mr. Gibbons will oversee ownership and operations of the Authority’s four facilities, including the Boston Convention & Exhibition Center in the South Boston Waterfront, the John B. Hynes Veterans Memorial Convention Center in Boston’s Back Bay, the MassMutual Center in Springfield, and the 1,350-space Boston Common Parking Garage.

“David brings a very unique leadership skillset that matches with our plans for growing the MCCA brand globally,” said John McDonnell, chairman of the selection committee and MCCA Board and managing director of International of Fifth Generation / Tito’s Handmade Vodka. “He has a proven track record as an innovator, team builder and positive change agent. He knows how to take established facilities and bring them to new levels of success.”

Mr. Gibbons has spent 30 years in leadership roles in the hospitality industry. He has held the role of general manager at Swissotel (Boston), The Drake (New York City), and the Taj Boston. He is highly regarded for his leadership experience in operations, food and beverage, finance, labor relations, and overall general management. He is former chairman of the Massachusetts Lodging Association.

“I am pleased to welcome David to the MCCA,” said Massachusetts Gov. Charlie Baker. “As a former hospitality executive and head of the Massachusetts Lodging Association, David brings the leadership experience and credentials needed to maintain a thriving convention and tourism industry in Massachusetts.”

The board assembled a selection committee comprised of five board members: board chairman – Mr. McDonnell; Massachusetts Executive Office for administration & finance secretary – Kristen Lepore; Amy Lattimer; Michelle Consalvo; and David Sweeney. Led by Korn Ferry, the group reviewed over 100 resumes, and conducted several interviews before coming to consensus to present Mr. Gibbons as the new leader of the MCCA.

The MCCA’s mission is to generate significant regional economic activity by attracting conventions, tradeshows, and other events to its facilities while maximizing investment returns for the residents and businesses in the Commonwealth of Massachusetts. In 2015, the MCCA hosted 262 events at the BCEC and Hynes with 724,292 attendees, generating 632,433 hotel room nights and $784 million in economic impact.

The Boston area attracted a lot of business for search firms. Aside from housing burgeoning financial services  organizations, the city and its suburbs are replete with businesses focused on technology, venture capital, manufacturing, clean technology, consumer, business services, higher education, non-profit, and high growth — all looking for cutting edge talent who can keep them competitive in their respected fields.