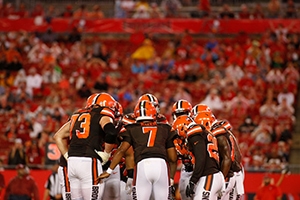 “We are thrilled to have John Dorsey lead our football operations,” said owners Dee and Jimmy Haslam.

“John has been immersed in the NFL for 26 years, won two Super Bowls, built sustainable winning football teams and is highly respected for his football acumen.”

“We know we have a critical and very positive opportunity ahead of us to profoundly impact the foundation of this football team,” they said. “Bringing in someone of John Dorsey’s caliber, his track record of success and his experience, significantly strengthens our opportunities to build a winning football team and that has been, and continues to be, what we want for our fans.”

The Browns enter this week with an 0-13 record. They are three games away from becoming the second team in NFL history to finish a winless 16 game season.

Mr. Dorsey seems up for the task. “I have quickly realized how passionate Jimmy and Dee are about bringing a winning team to the city and would have not taken the job if I didn’t think the right ownership was in place,” he said. “Football is what I know, it is what I love, it is what I have worked my whole career at and I thrive on every element that goes into building a winning football team.”

Korn Ferry’s sports practice is led by Mr. Hughes, who is renowned for identifying, assessing and developing leaders for sports organizations. His relationships in sports and intercollegiate athletics are extensive, having spent 20 years coaching in professional and intercollegiate football and working for five Hall of Fame coaches. He also led the development of psychological testing, competency development and structural behavioral interviewing for the San Francisco 49ers and Green Bay Packers. Jason Belzer of Forbes has called Mr. Hughes the most valuable connector of the sports industry.

In 2016, Korn Ferry was brought in by the Browns to find its current head coach Hue Jackson. Mr. Hughes also led that search. It remains to be seen if the new GM will retain Mr. Jackson after another disappointing season.

General manager may be the toughest job in professional sports. In the last decade, as the four major North American professional leagues — Major League Baseball, the National Football League, the National Basketball Association, and the National Hockey League — have seen revenues and profits soar, the role has become more complex, more challenging and exponentially more stressful, according to a report issued by the Korn Ferry Institute. Increased media attention, fueled by the 24-hour news cycle of cable television, the internet and social media, has put general managers under intense, and unprecedented, scrutiny.

The GM role, once an unheralded backroom post handled in relative obscurity by former players, is now tracked and analyzed with such precision by fans and the sports media that job security has dropped precipitously. High turnover has heightened the work of recruiters.