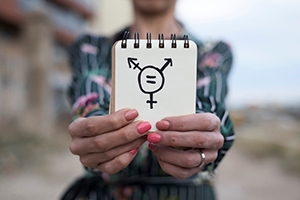 Over the course of five months, the search firm reached out to upwards of 250 prospects and sources, ultimately vetting more than two dozen potential candidates with TLDEF’s search committee. After multiple rounds of interviews and presentations, the search committee narrowed the pool to a group of six final candidates from whom Ms. Marra was unanimously selected as executive director.

“We were committed to finding a truly unique combination of lived and professional experience – and to really centering trans and nonbinary perspectives and voices – for this critical leadership position,” said Mr. Chase. “After an intensive search and a thorough assessment, Andy emerged as the perfect choice for TLDEF. Andy is widely respected throughout the broader LGBTQ movement and enjoys a strong reputation as a smart, strategic, bold and experienced leader.”

“She will bring all of that credibility, along with the talent, experience, character, and determination necessary to move the needle, to TLDEF and to trans advocacy in this country,” he said. “It couldn’t come at more critical time. Watch for great things to happen at TLDEF under her leadership.”

Joseph A. Hall, co-chair of the TLDEF board of directors, described Ms. Marra as a powerful force in the transgender movement, with a distinguished career in advancing LGBTQ equality. “She brings a depth of experience and enthusiasm to this role that is sure to infuse a vibrant new energy into TLDEF’s crucial transgender advocacy work,” he said.

Alaina Kupec, co-chair, TLDEF board of directors, said Ms. Marra will be a pivotal player for the organization and the transgender community. “Andy joins us at a critical time when transgender people face ongoing and relentless attacks from the highest levels of our government,” she said. “At this urgent moment in our history, Andy brings the solid leadership we need to counter the threats confronting us, sustain the achievements we’ve already made, and position TLDEF for substantial victories for transgender people in the years ahead.”

Ms. Marra is a transgender Korean-American woman who has spent the past 15 years working with LGBTQ and social justice organizations worldwide. Prior to her appointment she spent nearly five years managing external communications at the Arcus Foundation, where she was a leading partner in launching the Global Trans Initiative, a historic multi-million dollar philanthropic commitment in support of transgender communities worldwide. She was also a leading member of Grantmakers United for Trans Communities, an initiative designed to increase the amount, and improve the quality, of funding to support transgender and gender nonconforming organizations and issues.

“While all of us at Arcus are incredibly sad to lose Andy as a foundation colleague, we couldn’t be happier or more hopeful for the kind of impact that she can have as TLDEF’s executive director,” said Arcus’ co-executive director Jason McGill, who also leads the foundation’s Social Justice Program. “Andy’s leadership and many contributions to the LGBTQ movement are well-known, and we are delighted to see her return to the front line with one of our grantee partners at such a critical time for the LGBTQ and wider social and racial justice movements.”

Before Arcus, Ms. Marra oversaw public relations at GLSEN, a national organization focused on LGBTQ issues in K-12 education. She was also co-director at Nodutdol for Korean Community Development and a senior media strategist at GLAAD. She currently serves on the boards of Freedom for All Americans, a group working to advance comprehensive nondiscrimination protections nationwide, and Just Detention International, which is dedicated to ending sexual violence in prisons.

TLDEF, founded in 2003, is committed to ending discrimination based on gender identity and expression and to achieving equality for transgender people through public education, test-case litigation, direct legal services and public policy efforts. Along with its signature Name Change Project, which provides free legal name change services to community members through partnerships with some of nation’s premier law firms, TLDEF’s legal programs bring test-case litigation with wide impact in all areas of transgender equality.

In a career of more than two decades, Mr. Chase has led dozens of executive search and leadership transition engagements for non-profit organizations as well as companies in the finance, technology and professional services sectors. Most of his engagements are for executive director/ CEO, senior development and board positions, though he has also conducted searches for C-level leaders of finance, operations and programs. He has particular expertise in working with small- to mid-sized, mission-driven non-profits, providing consultation and advisory services to the boards and leadership volunteers responsible for governance and organizational development.

Bringing more than five years of retained executive search experience, Ms. DiFelice’s primary focus is non-profit and higher education assignments. She has also worked in the technology, healthcare and consumer markets. Although she has helped recruit C-suite and other senior executives in many markets and sectors, she said she feels most connected to her work on behalf of mission-driven, not-for-profit organizations. Her broad non-profit search experience cuts across the healthcare, civil rights & social justice, education and arts & culture sectors.