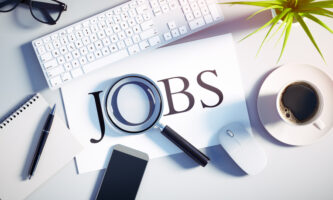 There were a record 11.5 million job openings at the end of March. Claims are down from an all-time high of 6.137 million in early April 2020.

Economists are watching closely, however, because jobless claims typically start to rise before a recession. There’s growing worry that a downturn is possible with the Federal Reserve raising interest rates to try to tame the worst inflation in 40 years.

“With labor shortages still a persistent problem, we don’t expect layoffs will be widespread, although job losses in the tech sector appear to be increasing,” said lead U.S. economist Nancy Vanden Houten at Oxford Economics.

“Claims have been rising since mid-March and can double before we even get to prior-period cycle lows,” DataTrek analysts Nick Colas and Jessica Rabe said in a morning note, pointing out employment growth tends to slow as interest rates go up and saying hiring could slow down as soon as this year. “While the Fed won’t say it, incremental joblessness is an inevitable outcome of current policy.”

Federal Reserve chair Jerome Powell reiterated his assessment of the labor market’s strength earlier this month, just days after calling the current job market “tight to an unhealthy level” in his post-Fed meeting press conference last week. “The labor market has substantial momentum. Employment growth powered through the difficult Omicron wave, adding 1.75 million jobs over the past three months,” Mr. Powell said in a recent speech. “By many measures, the labor market is extremely tight, significantly tighter than the very strong job market just before the pandemic.”