Menu
View our Events
Stay Connected:
Eighty-eight percent of professionals say that the stress level at work is worse than just five years ago, according to a new study by Korn Ferry. More than half say it is considerably worse. The consequences have been lost sleep, sick days and even quitting. 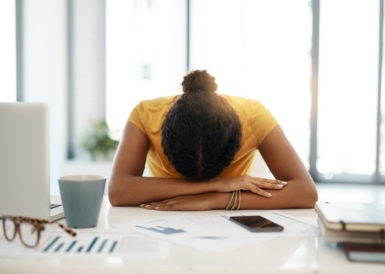 February 21, 2020 – If you find yourself feeling nostalgic about a former job, there may be a good reason for it: A new Korn Ferry survey suggests that today’s workplace has become increasingly stressful compared to recent years past. Increased work demands, bad bosses and changes in leadership are creating an ever more stressful work environment for professionals. The report sought to determine just how stressful employees find their workplaces and how that stress affects them.

The vast majority (88 percent) of professionals said that compared to five years ago, the stress level in their workplace is higher, with 51 percent saying it is much higher. Ninety percent of respondents said they’ve lost sleep because of work stressors; more than a third (34 percent) said stress has gotten so bad that they have called in sick; and even more serious, 34 percent said they’ve had to quit due to stress on the job.

The top stressor for professionals on the job, according to the survey, is too heavy of a workload (41 percent), followed by their boss at 28 percent.

“A bad boss and too heavy of a workload often go hand-in-hand,” said Bryan Ackermann, managing partner, Korn Ferry advance and digitized services. “While it’s important to accomplish tasks and achieve organizational goals, it’s up to both the employee and their supervisor to manage workloads and focus on what will create the best outcomes, including getting rid of non-effective ‘to-do’ tasks.”

Organizational shifts are also big stressors for professionals, as 93 percent of respondents said that a change in top leadership, such as a new CEO or division head, creates additional stress.

“The key to managing through organizational change is to be transparent and open about how it will impact the business and employees – explain the ‘why’ behind the changes and what plans are for the future,” said Mr. Ackermann.

American workers are stressed out and burned out but they refuse to take time out, according to a recent CareerBuilder survey. In fact, three of five workers (61 percent) polled in their recent study claimed they are burned out in their job. A third (33 percent) said their work has them under high or extremely high levels of stress.

“Between work, family and other responsibilities, it’s no wonder why we live in such a stressed-out environment,” said Mr. Ackermann. “The key for company leaders is to understand that the mental health of their employees is just as important as their physical health. They must take steps to create a work environment where employees thrive.”

Compared to 5 years ago, what is the stress level in your workplace?

Has stress at your job ever gotten so bad that you’ve had to quit?

Has stress on the job ever caused you to call in sick?

How often do you lose sleep due to work stressors?

What is more stressful?

How much do you agree that stress in the workplace has had a negative impact on your personal relationships?

If you had to pick one, what would you say is your biggest stressor at work?

Compared to 5 years ago, what is the stress level in your workplace?

If someone or something is stressing you out at work, how likely are you to confide in a co-worker

If it’s unlikely that you will confide in a co-worker about something that’s stressing you out at work, what is the top reason?

How much does a change in organizational leadership (e.g. new CEO or head of your division) impact your stress level?

Would you agree with the following? Stress at home has negative impact on my work productivity.