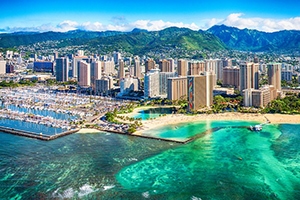 December 5, 2018 – Overall, the travel and hospitality market is estimated to have an economic impact of $6.5 trillion worldwide this year. In the U.S. alone, the $1.5 trillion industry accounts for nearly eight million jobs – more than five percent of the total jobs nationwide.

This has created a massive uptick of hiring within the travel sector.

Recently, Honolulu-based search firm Inkinen & Associates  placed Chris Tatum as the new CEO of the Hawaii Tourism Authority (HTA). In June, the HTA board of directors voted to fire president and CEO George Szigeti without cause.

Mr. Tatum’s appointment concludes a process by HTA’s board of directors that began four months ago to find and appoint a new leader of the agency responsible for managing tourism for the state of Hawaii. More than 100 applicants sought the position after the executive search process began last summer. Led by HTA board chair Rick Fried, a committee of board members and community members reviewed the qualifications of the applicants, before narrowing the list down to a group of finalists for interviews from which Mr. Tatum was selected and offered the position.

“Chris Tatum has an ideal combination of qualities, experience and dedication to service that is needed to lead the Hawaii Tourism Authority forward, and the ability to guide the future direction of our state’s most important industry in serving the interests of residents on all islands,” said Mr. Fried.

Currently the area general manager for Marriott Resorts Hawaii, Mr. Tatum is in the process of retiring from a 37-year career at Marriott to lead HTA. He is expected to start work in the coming weeks once the necessary requirements for employment with the state of Hawaii have been fulfilled.

Mr. Tatum previously served as chairman of both the Hawaii Lodging and Tourism Association and Oahu Visitors Bureau, and was also a member of the Pearl Harbor 75th Anniversary Commemorative Committee and 2011 APEC Hawaii Host Committee. Currently, he serves as chairman of the Hawaii Visitors and Convention Bureau.

In his new position, Mr. Tatum will be charged with supporting the policies and instructions of HTA’s board, which include providing information and recommendations on a wide range of subjects, said the agency. He is also responsible for representing HTA’s interests and position with the Hawaii state legislature, which includes providing testimony, comments and information on legislation that has an impact on HTA’s operations and/or the welfare of the tourism industry. He is also expected to represent HTA to the general public, tourism industry stakeholders and state government officials by conducting speaking engagements to share information and obtain comments.

“This is a once-in-a-lifetime opportunity to make a difference in my home by developing a sustainable brand strategy that enhances the visitor’s experience, while preserving our way of life,” Mr. Tatum said.

The Hawaii Tourism Authority is responsible for strategically managing Hawaii’s marketing initiatives to support tourism. Its goal is to optimize tourism’s benefits for the state while being attentive to the interests of travelers, the community and visitor industry.

Inkinen & Associates places executives and management personnel with companies in Asia, Hawaii and the mainland U.S., assisting firms with executive through middle management placements in all industries. The firm has a long history of finding talent for a variety of roles, including C-suite, vice presidents, directors, managers and supervisors. Inkinen also provides human resources support services to corporate and individual clients, including career transition services.

Inkinen & Associates is also currently leading search for a chief administrative officer and vice president of marketing and product development for the Hawaii Tourism Authority. The new chief administrative officer will be responsible for working closely with the president and CEO to fulfill HTA’s strategic plan, said the agency. Candidates should have knowledge of the principles and practices to deliver administrative accountabilities in a large organization, said HTA. The VP of marketing and product development is responsible for formulating and supervising the development of strategic tourism marketing plans and programs supporting the objectives, policies and guidelines of the Hawaii state plan for the tourism industry. Qualifications for the role, according to the HTA, include extensive knowledge of tourism marketing, advertising, product development and other strategic promotional practices.